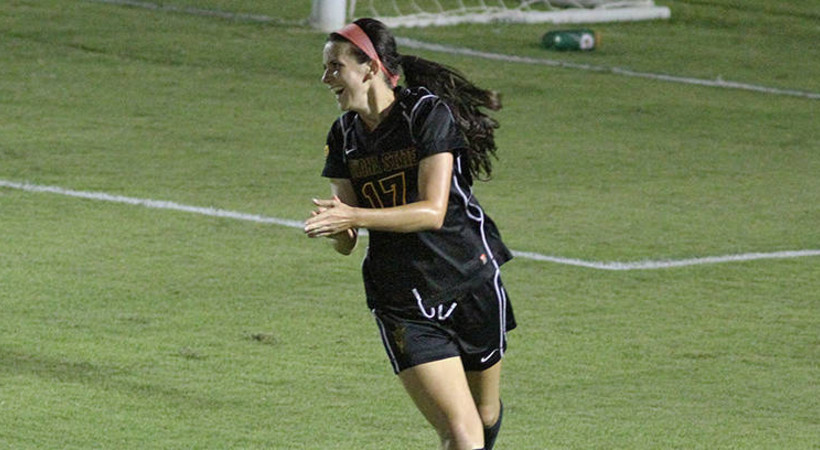 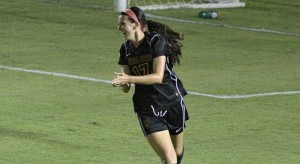 Cali Farquharson has Arizona State rolling through the early part of the 2014 season. (Photo: Pac-12)

The state of Arizona has traditionally lost its top high school prospects to other states’ universities. That list is long, including professionals who have spent time with the U.S. or Mexican national teams at the full or youth level.

The most famous former Sun Devil is U.S. international defender and F.C. Kansas City NWSL Championship winner Amy LePeilbet, who grew up in Illinois. But the trend has begun to change as the Sun Devils had two locally born players called in to the U.S. U-23 national team camp this past June in California: junior forward Cali Farquharson and junior defender McKenzie Berryhill. Farquharson scored 10 goals in each of her first two seasons at ASU, with four game winners in 2013, including two in overtime against Illinois and Utah. Berryhill played every minute in central defense last season and has started 34 of her 38 career games. Both players earned second team All-Pac-12 honors last season.

Sun Devils head coach Kevin Boyd, who spent 10 years as the head coach at the University of California and recruited Alex Morgan to Berkeley, said: “We are very excited that McKenzie and Cali have been invited to the U.S. U-23 training camp. It is the first time since I’ve been here that we have had two players get invited to the camp. Both of them played extremely well last season and we think they will go in and compete quite well. It’s a great opportunity for them and one that is well deserved. We look forward to see how they perform there and what may happen after the camp as well.”

Farquharson talked about her U-23 experience with The Equalizer after ASU’s 2-0 victory over Oklahoma State on Sept. 5. Farquharson explained that the national team camp was run primarily by University of Illinois head coach Janet Rayfield and University of Washington head coach Lesle Gallimore, as U-23 head coach Steve Swanson was only available for one day of the camp.

“It was such an amazing experience because everyone there was unbelievably talented and created a contagious environment to be great,” Farquharson said. “You want to push yourself beyond measure. I loved it. I want to go back—that’s my plan.”

Farquharson was overlooked by a lot of schools, and only had scholarship offers from ASU and Loyola of Marymount. In Sunday’s 5-0 win over Nevada, Farquharson scored a first-half hat trick in a span of five minutes and 46 seconds.

When ASU played the Portland Thorns in the spring in Tucson in an exhibition match, (a 5-0 Thorns victory), Thorns head coach Paul Riley after the game cited the play of both Farquharson and Berryhill, who he thought had “equipped themselves well and would be worth a look in the future.”

Boyd, in his eighth season at Arizona State, has led his sides to NCAA playoffs three of the past five years, in arguably one of the toughest conferences in the country. Farquharson and Berryhill—both juniors on an ASU squad expected to be in the playoff hunt again in 2014—have shown that top Arizona youth players can have international and professional opportunities in the future by staying in-state for college.

ASU is now 6-1-1 on the season, including a 2-1 win over No. 6 ranked Texas A&M on Sept. 7 to win the Sun Devil Classic, after their win two days earlier over Oklahoma State.