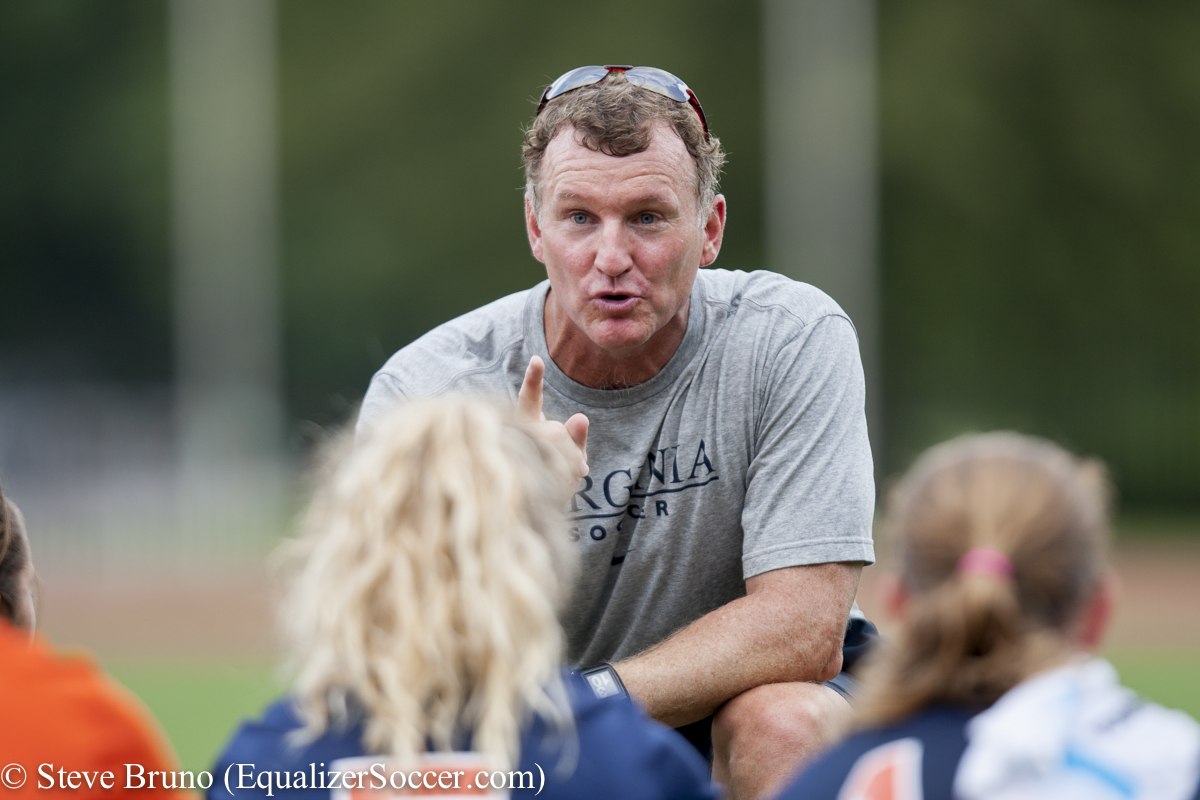 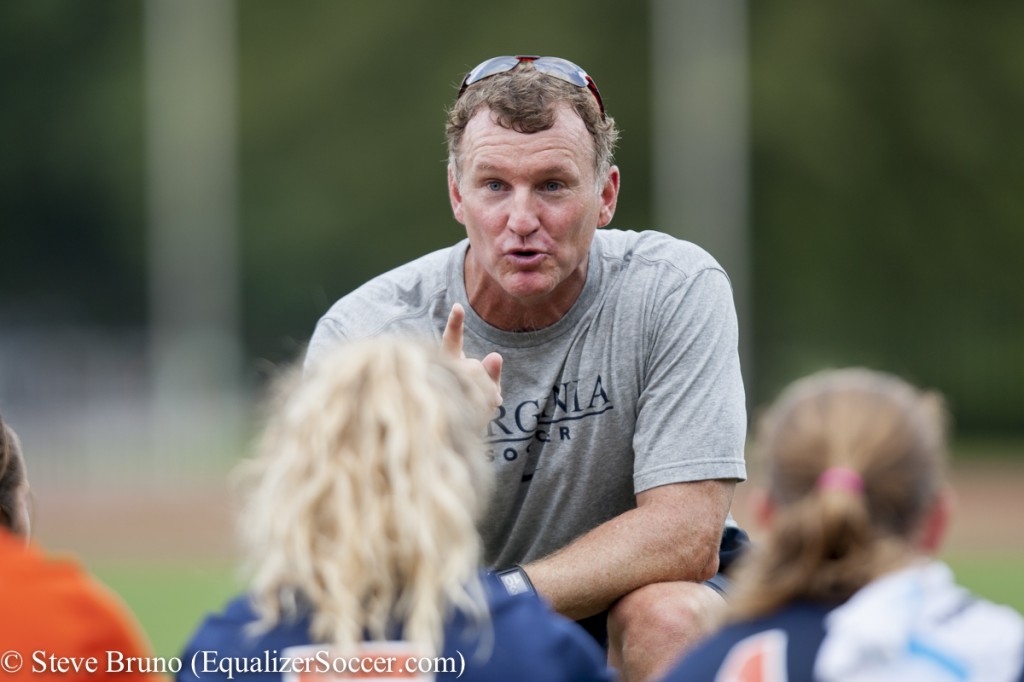 BIRMINGHAM, Ala. – Turnover is an inevitable part of sports. For Virginia’s Steve Swanson, sweeping changes from last year’s spectacular squad have given the 14-year Cavalier coach a hatful of roster vacancies as he prepares his No. 2-ranked team for another deep run.

“I think that’s probably the biggest challenge of college athletics, at least it is for me as a college coach in our sport,” he said. “You kind of get them right where you want them after four years and then they graduate. For us, we got the team right where we wanted it and then we lost half of them.”

Where he got the team was five minutes away from playing in the NCAA final last year, until a late, game-tying goal from UCLA set up a penalty-kick shootout in a semifinal classic which eliminated the Cavaliers and ended their case for a national championship.

The heartbreaking loss was the final shot for a large senior class, including five starters, who helped power the most formidable offense in the country on their way to a school record 20-game winning streak. Virginia’s key to success was a gorgeous, intuitive passing game that, at times, elevated rapid ball-movement to an art form and was the envy of virtually every other program in the country.

“People asked me last year… ‘Wow, how does that kind of style happen?’ Well, it’s hard work! It’s four years of hard work!” the coach said in mock exasperation. “Our players took a lot of time to get to that and we’re not just going to turn that around when you have (lost) as many players as we have and make that happen as easily. It’s difficult.”

Swanson admits, though, despite the bittersweet loss of the players he nurtured over those years, the opportunity to integrate and develop the next generation is also one of the most enjoyable aspects of his job. While Virginia undoubtedly has designs on another College Cup trip in 2014, they’ll have to do it without last year’s starting outside backs, center back, holding midfielder and both right-flank attackers. In their place, seven freshman and two sophomore transfers make up the incoming class. 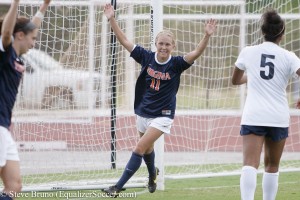 Brittany Ratcliffe celebrates a goal in a recent match against Samford. (Photo Copyright Steve Bruno for The Equalizer)

Despite having half his starting lineup graduate, Swanson retained the heart of Virginia’s goal-scoring prowess which the Cavaliers used to mercilessly smother opponents in 2013. Brittany Ratcliffe made a name for herself in 2013 as a super-sub who shredded tired defenses and jolted the Virginia offense when she came on the pitch, scoring all but one of her 12 goals last season while coming on in relief. Now combining with leading-scorer Makenzy Doniak in the starting lineup, the two juniors are expected to form one of the most threatening strike partnerships in the country.

“Brittany, for all practical purposes, could’ve started for us last year,” Swanson said of his junior forward’s vital role on the 2013 team. “I think she did a great job coming off the bench. She accepted that role and there’s a lot of players you can’t bring off the bench, they don’t have that spark, but Britt has that inner DNA — she’s very competitive, she works awfully hard, she’s got the athleticism to cause problems for teams and she’s quick and hard to contain.”

Doniak missed much of the team’s preseason with the U.S. U-20 national team in the World Cup and Swanson says it may take some time for the two to form what, on paper, looks to be a dynamic duo. Already, though, Ratcliffe and Doniak are 1-2 for the team lead in points and goals. Freshman Veronica Latsko, twice the Gatorade State Player of the Year in Pennsylvania, has proven an able understudy as well, with two goals scored already in her first five games as a substitute.

Many of Swanson’s challenges begin in the midfield, where senior Morgan Brian returns to command the offense in her final season. As the lethal, glistening point in Virginia’s midfield diamond, Brian was at or near the top in the Cavaliers’ three major offensive categories in 2013. Through the first five games of the season, though, Brian has only scored once, picking up her first goal on Sunday against Samford. For a player who scored 14 times in 2013 and now sits fifth on Virginia’s career points leaders’ list, such a slim goal haul might be setting off alarm bells in Charlottesville, but the midfielder says her role behind the potent pair of Doniak and Ratcliffe in the front and the inexperience further back in the formation necessitates a more withdrawn role instead of an outright attacking mid.

“Just with our personnel this year, I almost have to do a little more string-pulling from deeper with the midfield,” Brian said. “It could change once we get players more experience and maybe I can get the ball higher up the field rather than having to get it from the backs. Between Brit and Mak… both of them score goals and I think that could offer some more threat up top. For us it will probably be good, we just have to figure out the chemistry between them and between myself and the whole midfield.”

One looming issue will be more international call-ups for Brian. The pride of Frederica Academy already has a few appearances scheduled in mid-September friendlies and, with World Cup Qualifiers on the horizon, it is possible Brian could miss even more of her senior season if she makes a favorable enough impression on national team boss Jill Ellis.

“What’s hardest for me is just switching in my mentality of how to play,” Brian said of her trials playing for both college and country. “The speed of play is a little quicker. You’re playing with the best players in the world there, so it’s a little different. It’s difficult, but I think I’ve gotten a little used to it… hopefully.”

Swanson says his team has been able to get used to it, too.

“It’ll be a challenge, but the good thing is it’s a challenge we’ve been dealing with all three of her years,” Swanson said. “She’s been in and out of our team since she arrived at Virginia. We played several spring games against good competition without Morgan and they’ve shown they can maintain the high quality there.”