FieldTurf will pay Kyle $15,000 over three years, according to the report, to market the synthetic surface, which will be used in four of the six 2015 World Cup venues (Montreal and Vancouver use other brands). This comes as the battle against artificial turf surfaces at the 2015 Women’s World Cup rages on, with a group of over 40 players threatening legal action and citing gender discrimination as they try to have venues changed to natural grass.

Kyle, according to the TSN article, would not comment publicly until the announcement is made official, although FieldTurf vice president of marketing Darren Gill called Kyle “a good fit for us.” Kyle’s agent, Brant Feldman, called the opposing players’ arguments against turf “lame,” noting that NFL players compete on artificial turf.

In a tweet from June 9, 2013, Kyle mocked the FieldTurf used by Starfire Stadium, where she played home games for Seattle Reign FC during the 2013 season. The tweet showed turf burn on her legs, with the text, “I LOVE TURF!!!”: 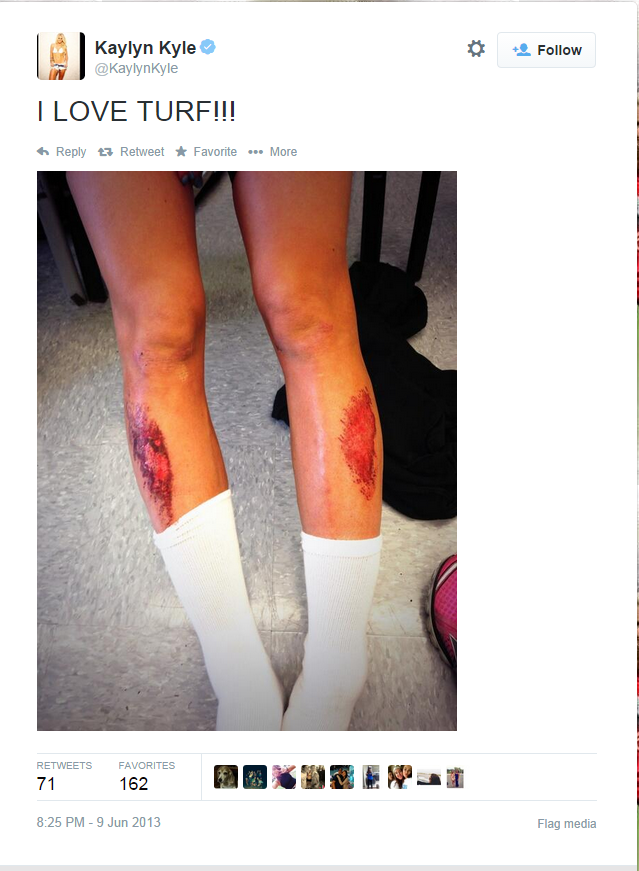 “What you say on Twitter a year and a half ago, you don’t realize it could come back and haunt you,” Feldman said.

Kyle’s Canada teammates have remained mostly quiet on the issue. Sophie Schmidt recently said the team is trying to not be distracted by the turf war, but added that ” I’m pretty sure that every soccer player, any age, loves to play on grass.”

“If you ask any soccer player, they prefer to play on natural grass, it’s a fact,” she said. “But obviously I’m proud of the CSA and Canada for hosting this tournament. As a team, we’re not going to focus on what surface we’re playing on. We’re going to focus on trying to win the World Cup and let the others worry about what fields they are playing on.”