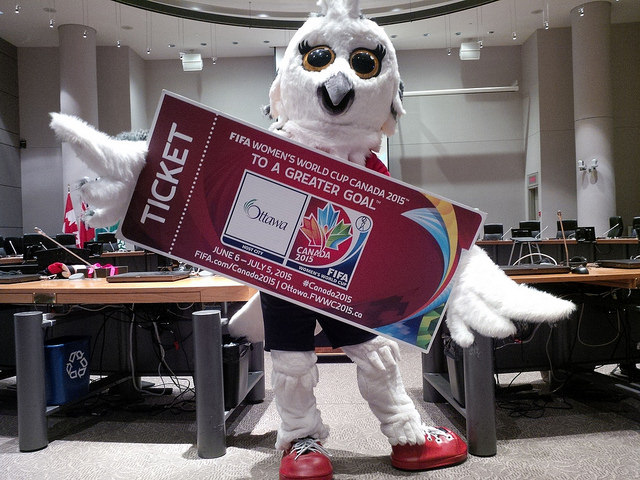 Tickets went on sale Wednesday for the 2015 Women’s World Cup in Canada, marking another step in the countdown to the tournament which kicks off on June 6, 2015.

And Canada plans to do things big — record-breaking big.

Peter Montopoli, the chief executive of the National Organizing Committee and general secretary of the Canadian Soccer Association, says the NOC’s and CSA’s ambitions are to make Canada 2015 the biggest FIFA event ever, outside of any men’s World Cup. The targeted total attendance is 1.5 million, Montopoli said last month at the FIFA 2014 U-20 Women’s World Cup closing press conference.

“We’re trying to set goals that haven’t been accomplished before for 2015, and that’s 1.5 million spectators, which would make it in our hopes to be the largest attended FIFA event in history outside of a men’s World Cup and would also make it larger than the Vancouver Olympics of 2010, in terms of attendance,” Montopoli said.

The highest attendance Women’s World Cup in history was USA 1999, totaling 1,214,209 fans for 32 matches between the 16 teams. Canada 2015 will be the first-ever Women’s World Cup with 24 teams, increasing the number of total matches to 52.

“We have to do everything that we can to make sure that our country is fully engaged, and we’ve done our studies already to know that the country is engaged and supportive,” he added.

Stadium passports and half-passes for all six venues are now on sale, along with tickets to the July 5 final in Vancouver. Tickets to the final start at $50 and can be purchased here.

The first phase of Canada 2015 ticket sales run until Dec. 6, the day of the draw. At that point, the second ticketing phase begins, once teams are assigned to host cities and groups. Individual tickets are scheduled to go on sale early in 2015.