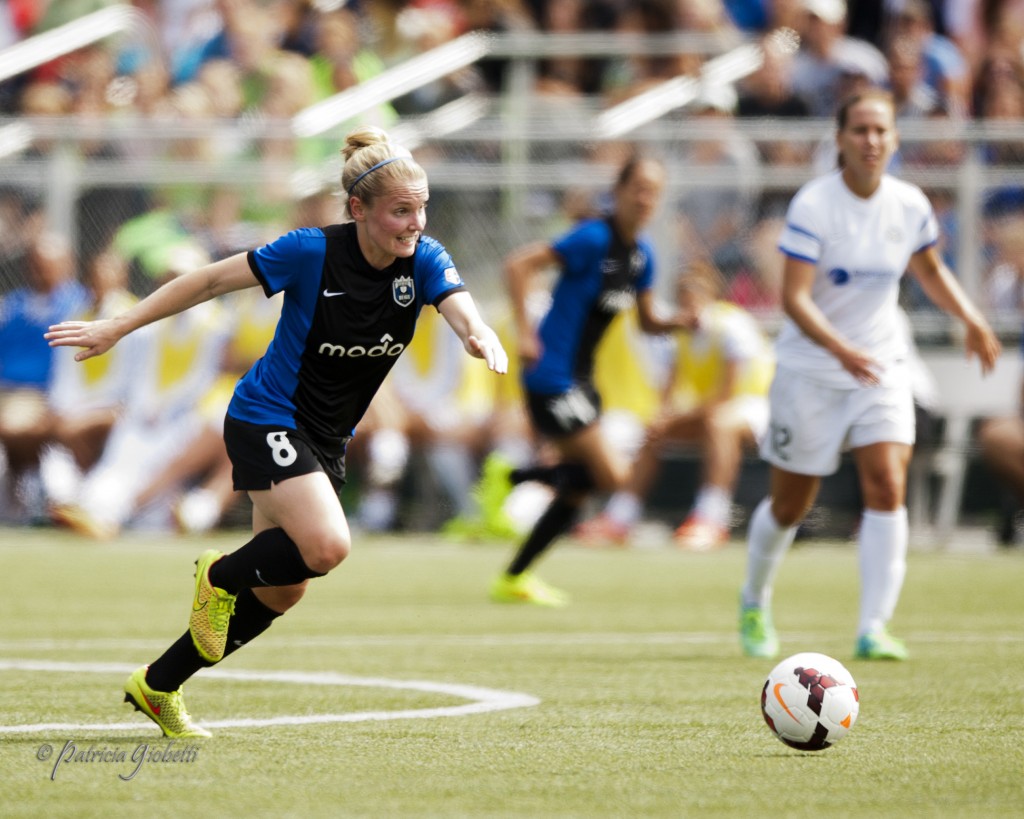 Kim Little is focused on getting Scotland to the World Cup, not an overseas loan, this NWSL offseason. (Photo Copyright Patricia Giobetti for The Equalizer)

Scottish forward Kim Little, the 2014 NWSL Most Valuable Player in her first year in the league, will focus this offseason on helping her native country qualify for the Women’s World Cup. With two games left in the UEFA qualifiers in mid-September, Scotland sits 3 points behind Group 4 leaders Sweden (21 to 24 points after 8 games); the group winner will clinch a World Cup spot.

“We are in a very good position to maybe finish first. However with a negative goal difference, second was more realistic,” Little said.

Sweden defeated Scotland 3-1 at Motherwell in June. Scotland does look assured of a runner-up spot for four of the seven groups’ second-place finishers, which would entail home-and-away semifinals, with the winner advancing to a two-leg final. The winner captures the eighth and final UEFA spot at the 2015 Women’s World Cup.

Little explained the importance of the next few months for her national side, with a qualification to a first major tournament (FIFA/UEFA) for the national team as an excellent opportunity to grow the sport:

“The National Academy—now in Edinburgh—has helped so that the players can train like professionals [since] the Scottish Women’s League is amateur,” she said. “The positive publicity will draw more youth players into the Elite Program.”

Little also talked about the profound importance of Scottish national team head coach Anna Signeul, who came on board in March of 2005 and directs the strategic development of the women’s game. Signeul was a former player and youth national team coach in her native Sweden.

“Ana brought the physical side and improved fitness so we could better compete against the top sides like Sweden, German, and France,” Little said.

“I’m really proud of what Anna has done,” Sundhage said in June, before the two teams met. “If you look at the way Scotland played before she came and then the job she has been doing, she has been working really hard to make them play good football.”

Unlike other NWSL players who are going to play abroad this offseason, Little will not play club ball overseas. Little explained that she will return to the Reign after the UEFA games are over. With the NWSL announcing that it will take a two-week break during the 2015 World Cup and extend the regular season into September, she said that: “It will probably limit my opportunities to return to Europe in the 2015 fall offseason, but I’ve not thought about it yet.”

Little said she was pleased with her NWSL experience thus far. She came to the U.S. because she was looking for “something new, a new challenge. It was the right time and right city.”

With her former Arsenal head coach, Laura Harvey, having joined the Reign for their inaugural year in 2013, Little felt comfortable leaving the United Kingdom for a new situation.

“It’s been a great season,” Little said. “We have quality players and we all fit together, on the pitch and off. It the best club environment that I have ever been involved with. The owner, staff and team were all great. It creates a really good environment and made it easier to be successful.”

She said that the FAWSL (officially a semi-professional league) is making progress in its fourth season: “Having fewer teams from the [previous] Premier League improved the quality.” Little would like to see bigger crowds but says the FAWSL is definitely “moving in the right direction and most teams are training as professionals.”

And the transition to the artificial turf at Memorial Stadium—the original home of the NASL Sounders in 1974 and 1975—was fairly straightforward for the Scottish international.

“It was not a difficult transition. We trained on turf with Arsenal and played the games on grass.” She does prefer to play on grass because: “the game is faster on well-maintained grass pitches.” But to her, the predominance of artificial surfaces throughout the league was not a great distraction. The use of artificial surfaces by the six host cities in Canada next summer has become a growing issue among players and fans, with a group of about 40 players engaging legal support for their pleas to FIFA to utilize grass surfaces.

Little’s focus at this point is to make sure that next summer, she has games for the Reign as well as Scotland in nearby Canada.