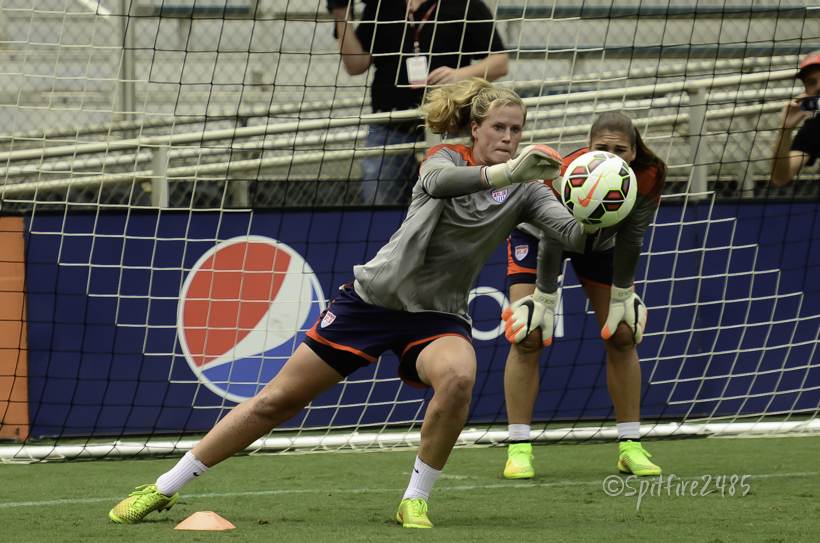 Alyssa Naeher got her shot with the USWNT in August after a strong NWSL season in Boston. (Photo Copyright Nicole Gamard for The Equalizer)

A perpetually changing backline and second-to-last-place finish isn’t the recipe for league-wide honors, but that’s exactly what happened with Alyssa Naeher. Last week the Boston Breakers goalkeeper nabbed Goalkeeper of the Year honors in the NWSL despite minding the net for a team who finished 15 points off pace for a playoff position.

The Breakers defensive issues started when Kia McNeil decided not to play before the season began. The Breakers were forced to improvise on the backline and for a host of other reasons had trouble for much of the season.

While a constantly in-flux backline is generally disastrous for anyone in net, for Naeher it provided a raised platform for her to showcase her skills. She was called into action early and often, resulting in some of the best saves of the season. All told, she logged 2,115 minutes for the Breakers while recording 106 saves, far and away a league-high.

On no occasion did Naeher shine brighter than a late-season game against the Portland Thorns. The Connecticut native tied the record for saves in game with 10 and helped the Breakers secure a 2-0 win over the Thorns, whose roster contains two of the world’s best strikers in Alex Morgan and Christine Sinclair. One of Naeher’s stops was a point-blank denial of Sinclair; the most remarkable one may have come when she snuffed out an attempt by Allie Long from about six yards out in the 63rd minute.

[PHOTOS: Naeher saves everything in heroic performance vs. Thorns]

Her heroics earned the praise of fans and media alike. Her performance that night spawned a Tim Howard-esque hashtag in which fans described all the things the keeper could save. More importantly, Naeher’s play earned Player of the Week honors for the 18th week of the season. She was the only non-offensive player to win the award all season. 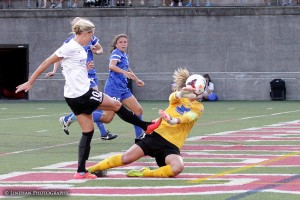 Naeher came up huge at season’s end vs. Portland. (Photo Copyright Clark Linehan for The Equalizer)

Last month, the Boston keeper was called up to the U.S. national team ahead of an August 20 match against Switzerland, after Washington’s Ashlyn Harris suffered a concussion. Naeher’s Boston teammate and U.S. stalwart Heather O’Reilly also praised the goalkeeper’s performance over the course season at a training session before the match.

“She’s really just raised her level,” O’Reilly said. “Obviously, the Breakers didn’t have the results that we would have liked this season but Alyssa really did keep us in so many games. So I think that she should be very proud of her performance and obviously for her to be brought in here just shows that the coaches noticed and they believe in her at this level as well.”

U.S. head coach Jill Ellis remarked ahead of the Switzerland game that NWSL is a platform she uses to identify talent. She named Naeher and Long as players whose the NWSL play has helped them earn recent call-ups. Specifically, Ellis said that Naeher had a “fantastic season” in goal for the Breakers.

When asked about her phenomenal season in net for the Breakers, Naeher instead focused on the team as a whole and it’s unity.

“We put a couple of good wins together and finished on a really good note and I think it’s definitely something we can build on going into next year,” she said. “Obviously, we had a few shortcomings this year and it wasn’t ideal but I think we stuck together as a team…We found a way to keep fighting and I was proud of our team.”

Boston will have some rebuilding to do in the off-season, but no doubt the Breakers’ faithful will look forward to having Naeher in net.

For now, Naeher will focus on her U.S. national team aspirations as she’s earned another opportunity to showcase her skills at the highest level. She was recently named to the team’s 28-player roster ahead of two matches in September against Mexico.