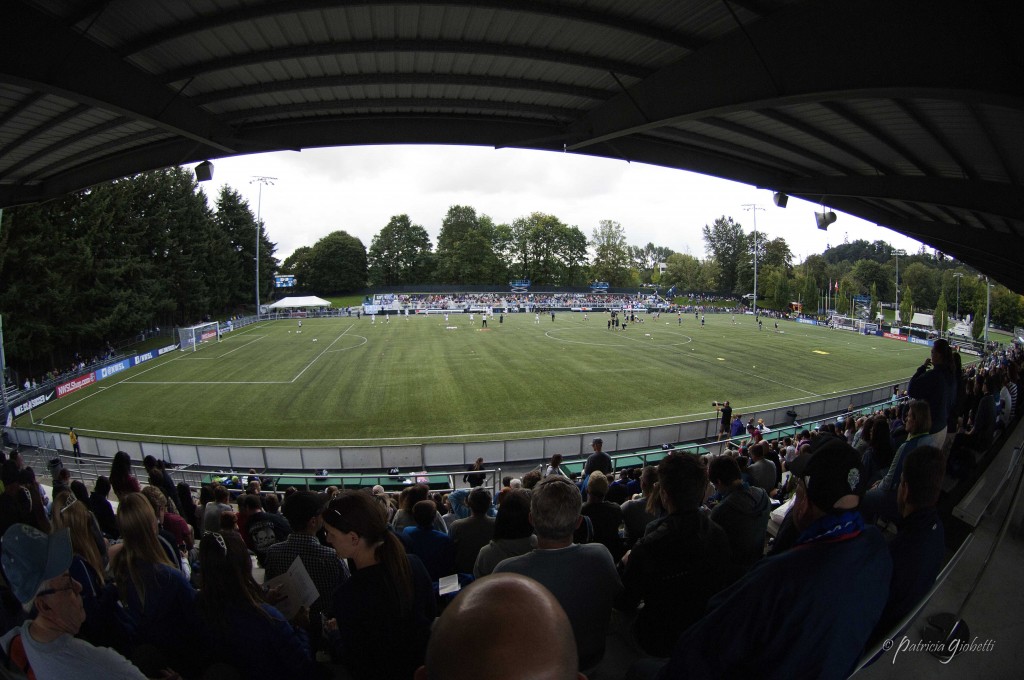 TUKWILA, Wash. – In the words of Laura Harvey, Sunday felt like a proper cup final.

The two best teams of the season, both similar in tactical brilliance, played an end-to-end chess match that featured special, highlight moments that burn into one’s memory for the foreseeable future.

Seattle Reign FC’s coach was on the losing side of a 2-1 result to FC Kansas City in the NWSL Championship. She was gracious as always but shorter than usual on words postgame, at least somewhat surprised to be on the wrong end of a result despite executing a gameplan that on most days would worked – and did all season.

But FC Kansas City defended to near perfection for the full 90 minutes, had its key players step up in the big moments, and got the couple of breaks any team needs to win a title.

And it all unfolded in front of a crowd modest in number but as engaged as any in NWSL, outside of Portland. In the end, the match was a showpiece event for the fledgling league, and will hopefully be looked back on as one of the moments that helped the NWSL make it, as opposed to another footnote in the murky history of women’s professional soccer trying to gain traction in the United States.

[MORE: Complete coverage of the 2014 NWSL Playoffs from The Equalizer]

Here are how things looked from a ground-level view in Seattle in the days that built up to the final and the main event on Sunday:

—  It’s already been said and written many ways, but Lauren Holiday was close to her all-time best on Sunday with two brilliant assists. Her second goal, which involved weaving through defenders with the ball stuck to her feet, gets better every time you watch it. This is the Lauren Holiday that won the 2013 league MVP award and broke out at the 2011 World Cup. After several great years, Sunday’s championship match MVP performance looked like a guerrilla marketing-style reminder that she’s in her prime ahead of Canada 2015; she stole the show Sunday.

—  Holiday’s play shouldn’t overshadow Amy Rodriguez, who scored the two goals and was brilliant throughout the playoffs – scoring three goals in two matches – and all year, having netted 13 goals in the regular season. A-Rod was the last player off the field on Sunday when time ran out for warmups, as she worked in a few more shots on net which paid off in the hours to follow. And she was the last player off the field after the match and interviews, which she conducted with the biggest of smiles after having fallen short in two straight finals in WPS in 2010 and 2011 with the Philadelphia Independence.

—  Greeting Rodriguez postgame was U.S. coach Jill Ellis, who at this point has to give Rodriguez more minutes in upcoming friendlies against Mexico and in World Cup qualifiers. In a statement that would have been unthinkable six months ago, Amy Rodriguez is the best, most in-form U.S. striker right now. And it should be earning her more minutes with the United States.

— Seattle midfielder Megan Rapinoe, a U.S teammate, postgame Sunday: “I think Cheney (Holiday) has been pretty consistent for a while now. I think A-Rod kind of went through a hard time. She was playing out of position for a long time, really. In my opinion, Pia (Sundhage, ex-U.S. coach) had her as more of a winger and she’s really a true ‘nine.’ So to see her back in that position is just brilliant. It’s so good to see her like that, especially going into the World Cup. We’re going to need people to put the ball in the net.” 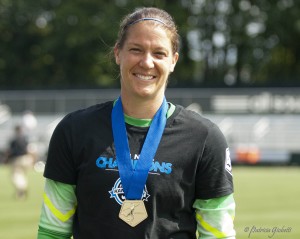 Nicole Barnhart quietly had a very good match Sunday in the NWSL Championship. (Photo Copyright Patricia Giobetti for The Equalizer)

—  Defense being overlooked is nothing new, and the savvy play of Holiday and Rodriguez on Sunday only perpetuated that notion. But Becky Sauerbrunn was her usual stellar self, Kassey Kallman helped in wrapping up Sydney Leroux and Nahomi Kawasumi, Leigh Ann Robinson got forward well, and Nikki Phillips was quietly everywhere. Not to mention goalkeeper Nicole Barnhart, who was solid throughout and whose kick save a minute after Kansas City’s first goal has been undersold.

—  Kim Little was hardly ineffective in the final (Harvey was happy with Little’s play), but she was contained enough for a Kansas City victory. With Little, she’s never going to be completely shut down from a game. She had moments – the 24th minute shot that forced the Barnhart kick-save, and the 30th minute cross to Kawasumi among them – but Jen Buczkowski in particular kept the Scotswoman bottled up enough to prevent Little from taking over the match. On the whole, Little has surpassed even the highest of expectations this season.

—  Speaking of that Kawasumi header, the miss looks worse on replay. It was a wide-open chance from six yards out. She’s been brilliant all year, but that’s a moment that would have changed the match. Here’s our feature on Kawasumi communicating with Reign teammates on the language of soccer.

—  And FC Kansas City’s Buczkowski and rookie Jenna Richmond, continuously overlooked this year, were spectacular in shadowing Little and Fishlock through the midfield.

— The immediate shift in momentum from Seattle’s opening barrage to Kansas City’s turnaround was palpable, and it started on a dime in the 19th minute when Leigh Ann Robinson switched the ball to rookie left back Kassey Kallman to start a 2-v-1 opportunity.

—  It was a quiet season for the Leroux in Seattle, though she’s shown well internationally with the U.S. this year. Harvey acknowledged last week that Leroux has been challenged to keep the ball more in Seattle’s system, as opposed to the counterattacking play Leroux had in Boston last year. Leroux scored five of the Reign’s 50 regular-season goals (she had 11 in 19 games for Boston in 2013). On Sunday, with Seattle trailing 2-0 and in need of a goal, Harvey took Leroux off the field to bring in Beverly Goebel.

— Harvey discussing Leroux last week: “It was always going to be a different year for Syd. I think last year with Boston, the team played a way that suited Syd, on the counterattack all the time, and her pace in behind. We said from day one that teams don’t really play like that against us, so we were going to have to develop her game in a different way to make sure that she stayed in the game. I think that this year she’s become a better footballer all around. I understand and she understands that often she’s judged on goals, but I think her all-around game throughout the season has improved. She’s worked hard on the things that she said herself she didn’t think she was great at… There comes a point where people work out that that’s the way to stop Sydney Leroux, and our job is to help her develop a different way of playing.”

—  Kansas City’s diagonal runs were the perfect complements to Holiday. Merritt Mathias and Erika Tymrak often ran across the Seattle defense, from sideline to centrally, and that’s how Rodriguez scored her first goal.

— Elli Reed looked healthy on Friday, Saturday and Sunday after missing the semifinal with a left LCL sprain. She wasn’t overly impactful, but it was collectively an off day for the statistically the league’s best defense.

—  I don’t regularly watch practices for either FC Kansas City or Seattle Reign FC, but both teams were remarkably relaxed in the buildup to Sunday’s final. Watching the Blues train on Saturday, I actually thought they were a bit too casual, walk-through or not, and had some concerns. They came out a bit flat Sunday before settling in and proving that maybe that was a quiet confidence all along. 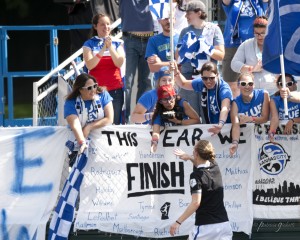 —  The crowd of 4,252 fans may not sounds like a large one, but it was a loud, engaged audience that filled every seat and most of the standing room at Starfire Sports Stadium. Frankly, it was a better crowd than those of more than double that at the last two professional women’s finals in Rochester, N.Y. I’m confident that 4,252 number would have doubled at Memorial Stadium, but the Bumbershoot music festival that took over downtown had been booked, and these are the realities of the young league. But I would hardly look at Sunday as disappointing off the field.

—  A behind-the-scenes note of concern from the view of attending practices and being in town early for the match: If you weren’t already a Reign fan, there wasn’t much buzz in the area to push you toward the match, whether in the stands or on TV. As we made our way through parts of Seattle and Tukwila, Dan Lauletta and I asked locals if they’d be watching the match, and most didn’t know what we were talking about. There was a serious lack of online local media coverage pre-match, with no local reporters at Friday’s or Saturday’s practices. A pair of Seattle Times reporters (here and here) said they had trouble with access to the Reign, which is disappointing for a growing league but also half of a two-sided story. Certainly there could have been more efforts from both parties. Media turnout for the match itself was good, at least.

—  Next year’s final being in late September with two weeks’ notice, instead of a one-week turnaround on Labor Day, should help with interest. I’m very confident there would have been more out-0f-town members of the media there Sunday had the turnaround and timing not produced such extreme costs.

—  There’s been a lot of ‘best in the world’ talk around the NWSL this week – coach, defender, crosser, organization, No. 10, etc. I think that may sell short some other great talent around the world, but I know this: Sunday was one heck of a game.