Andonovski: No one was going to be better than us today 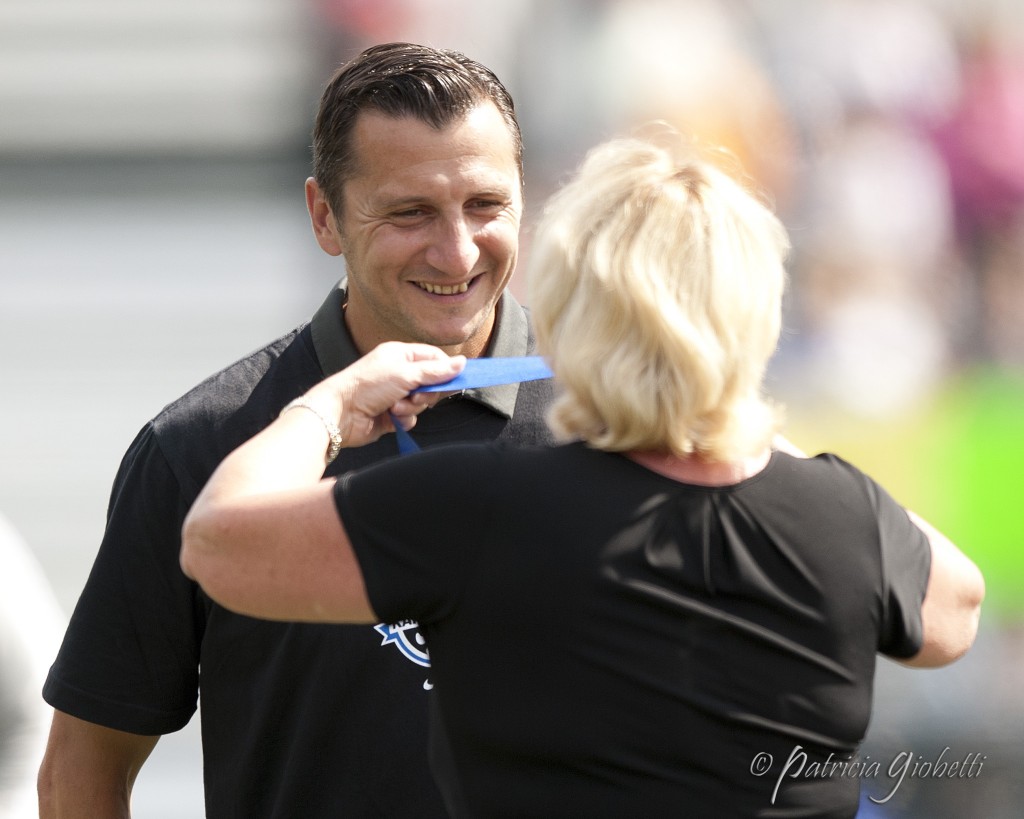 Vlatko Andonovski got his gold medal a year after disappointment in the NWSL semifinals. (Photo Copyright Patricia Giobetti for The Equalizer)

TUKWILA, Wash. — Vlatko Andonovski gathered his team in the locker room before the start of Sunday’s NWSL Championship and delivered something of an unconventional message. The FC Kansas City coach acknowledged that his 2nd-place team, that went undefeated at home and went toe-to-toe with the Seattle Reign on three different occasions, was not the better team in the final.

And then came the capper: “One thing we knew – no one was going to be better than us these 90 minutes.”

No one was better than FC Kansas City on Sunday, not even the mighty Reign, who went their first 16 matches this season before losing and finished 16-2-6. On Sunday, Seattle lost 2-1 at Starfire Sports Stadium. Even when the Reign carried the lions’ share of possession through the opening quarter-hour, there was no doubt for Andonovski that his side was in control of the match.

“Throughout the whole game I still wouldn’t say that we were not the better team just because we didn’t play the brand of soccer that we usually do,” Andonovski said of the first 15 minutes. “But we came with a goal and that goal was to win the game. In order to do that we knew we were going to have to weather the storm in the first 15-20 minutes and then we can start playing our game. We went safe the first 15-20 minutes and then Cheney (Lauren Holiday) dropped a little bit closer to the back line so she could start spraying the ball.”

The slight change also brought more support to the defenders, who had been struggling to break the Reign’s high pressure.

“We kind of knew they were going to high pressure and we still wanted to play our game but we also wanted to play it safe,” FC Kansas City defender Becky Sauerbrunn said. “We didn’t exactly find that balance right away.”

The ball had barely been in Hope Solo’s penalty area when FC Kansas City broke out and took the lead through Holiday and Amy Rodriguez. Holiday moved defenders one way while Rodriguez made a superb run to the other side, a run that only works if the ball is played in at the perfect time. 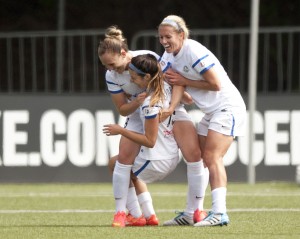 Amy Rodriguez celebrates her first goal of the NWSL final with teammates. (Photo Copyright Patricia Giobetti for The Equalizer)

“I can’t thank my midfielders (enough) and especially Lauren Holiday, who gave me two beautiful passes right in front of the net and I was able to slip them away,” Rodriguez said.

The second one, in the 56th minute, came at the end of an electrifying run that saw Holiday take on several Reign defenders before laying it off to Rodriguez. There were anxious moments after that, right down to a pair of golden chances late in the match that could have tied it and forced extra time, but the Blues were not about to let a 2-0 lead slip away for the second season in a row.

“Through the entire season we were worried about keeping leads,” Sauerbrunn acknowledged. “I know we’re kind of a team known to not be able to keep leads, but as we progressed through the season we’ve kept a lot of important leads. Especially today. It’s hard not to have Seattle score on you. It’s if we can keep our heads and not let them get the other one.”

Part of keeping the lead was trying to control the Reign’s offensive weapons. Kim Little was often on the ball but rarely able to take it into the box or give out dangerous distribution to Nahomi Kawasumi or Megan Rapinoe.

“Almost,” Andonovski said about the execution of the game plan against Little and friends. “I have to give a lot of credit for Buz (Jen Buczkowski). For 70 minutes she was all over her. Kim Little is a good player. You can put five players around her; she’ll still manage to find the little gaps, find the little things.”

Reign coach Laura Harvey said earlier this week that she thought FC Kansas City were the best team last season despite falling short in the playoffs and she reiterated that point postgame Sunday. Many will say that about Harvey’s team this year. But a year and a week after walking off his own field as a semifinal loser, Andonovski and his team were sporting their gold medals and some wide smiles.

“Unbelievable. This is my first professional championship game and it’s my first (time) winning,” said Sauerbrunn, who has an Olympic gold medal from 2012. “I love this team and I couldn’t think of better girls to spend the day with.”