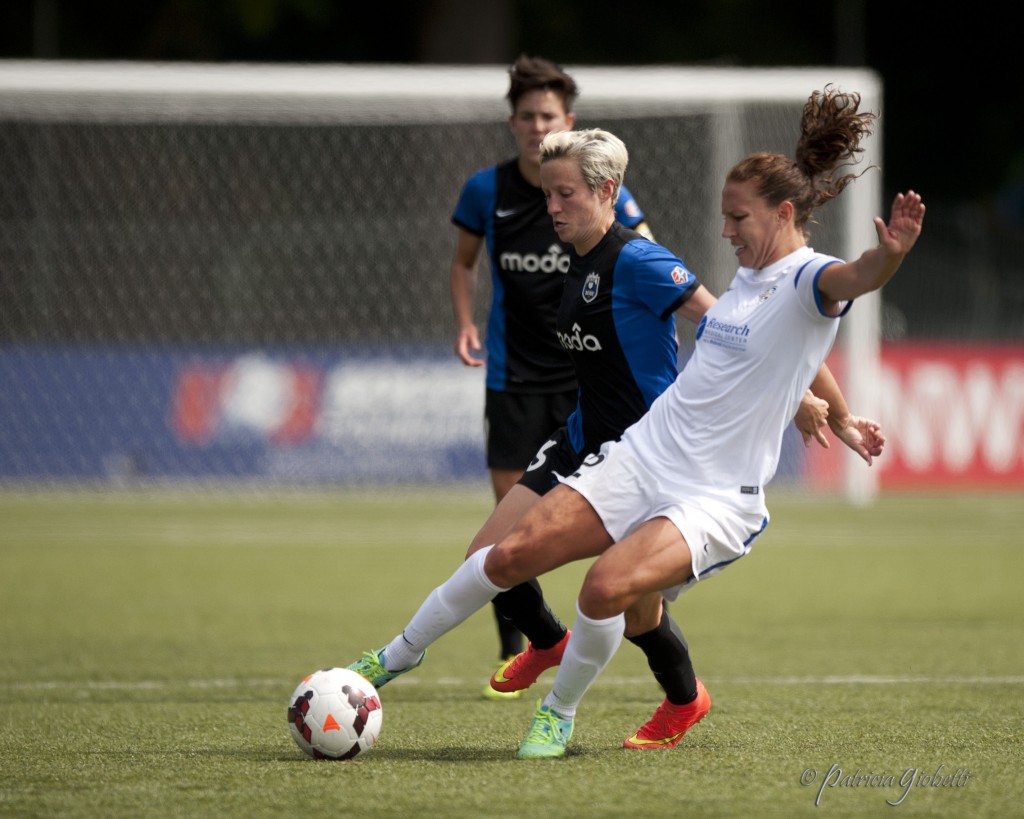 TUKWILA, Wash. — Last season Lauren Holiday was MVP of the NWSL thanks to leading the league in goals, assists, and highlight reel goals. This year she was named MVP of the NWSL Championship on the heels of two assists to Amy Rodriguez in FC Kansas City’s 2-1 victory over Seattle Reign FC. Both assists were remarkable for different reasons. She had to make the pass at precisely the right time to play Rodriguez through on the first. But it was the second that turned heads; it was the sort of play for which finals are remembered.

Fifty-six minutes into the match, Holiday received what looked to be an innocent ball from Leigh Ann Robinson. She turned to evade Keelin Winters, who stuck with her into the right side of the box. As Holiday continued to keep Winters at bay, Lauren Barnes arrived to help. Holiday kept Winters behind her and used her leg to shield Barnes as she took a touch between them. Kendall Fletcher also tried to help but got caught wrong-footed as Holiday gently moved the ball to Rodriguez for the finish.

“I was actually trying to score myself but they obviously closed me down,” Holiday said rather modestly. “I just tried to get free and once I got free I saw ARod at the top of the penalty spot. I found her and she had a great finish.”

The goal was soccer beauty at its finest. But it was also part of coach Vlatko Andonovski’s vision when the club was allocated Holiday before last season. “I openly say in the meetings that our game is we got to get the ball must go to (Holiday). Even if it’s a small touch, if the ball moves two feet, we’ve got to get the ball to (Holiday.) And then she is going to move it those two feet.”

Easier said than done of course. The first thing Andonovski had to do was sell Holiday on his vision for how the team would play.

“When I got (Holiday) and we started the team,” the coach said, “I had a chance to talk to her several times. One thing that I told her was we’re going to build the team around her as long as she believes in that. If she doesn’t believe in that we had to find another player to build around. I asked her, is she mentally ready to take the load (and) to carry this team. She was up for the challenge. She thought she could do it.”

The next thing was to make sure the rest of the team was ready to play off her. “Everyone bought into it,” Andonovski said. “Everyone likes having (her) on the ball because they know when she has the ball she’s going to find everyone else. Today she didn’t score a goal. But the assists that she have – a magician.”

WATCH each of FC Kansas City’s brilliant goals, each set up by Holiday:

Rodriguez, Holiday combine to lift FC Kansas City past Seattle Reign, to 2014 NWSL Championship
Andonovski: No one was going to be better than us today