Rodriguez scored the opening goal of the match in the 23rd minute, against the run of play, and added a second goal 11 minutes after halftime.

Seattle midfielder Megan Rapinoe scored with three minutes to play after Nahomi Kawasumi’s corner bounced around in the box, but the Reign couldn’t find an equalizer, losing for just the third time in 26 matches this season.

Rodriguez’s opener looked much like Kansas City’s first goal against Portland in last week’s semifinal, with Holiday orchestrating a counterattack and slipping in well-timed through ball to Rodriguez, who was making a slashing run across the field, from right to left. On Sunday’s opening goal, Rodriguez collected Holiday’s ball, hesitated, and softly placed the ball over an oncoming Hope Solo for the early lead.

Rodriguez’s second goal was a thing of beauty from Holiday, who carved up four Seattle defenders on the right side of the penalty box before getting endline and slotting a ball back to Rodriguez near the penalty spot for the left-footed finish. 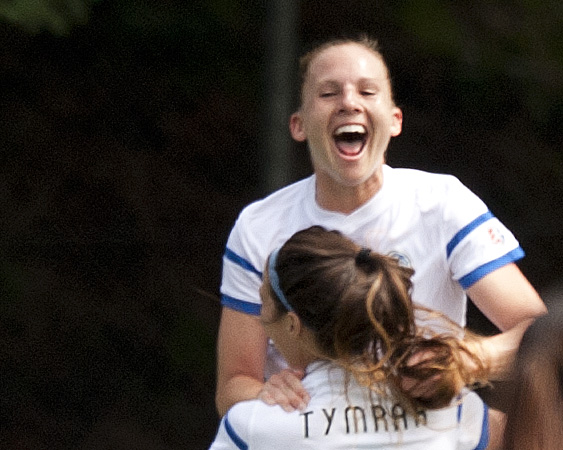 “I feel like today’s game wasn’t necessarily our best, but luckily I was able to get two chances and finish them,” Rodriguez said. “I can’t thank my midfielders, especially Lauren Holiday (enough). She has made me look so good this season and set up so many amazing passes.”

Feeding off of the cozy but vibrant home atmosphere, Seattle started the match on the front foot, swarming FC Kansas City at every opportunity. The high pressure caused a series of early cough-ups by the Blues, but a usually potent Seattle attack couldn’t convert the chances into goals.

Reign forward Nahomi Kawasumi started the early onslaught, sending a searching cross into the box in the 3rd minute that failed to find the head of a teammate. And Jess Fishlock nearly created a counterattack a few minutes later, but Kansas City’s defense weathered the storm.

Seattle goalkeeper Hope Solo didn’t touch the ball until 15 minutes into the match, but soon after the visitors swung the momentum, gaining confidence through lateral play that settled down the match. Right back Leigh Ann Robinson found rookie left back Kassey Kallman on a big switch in the 19th minute, creating a 2-v-1 that pitted Kallman and Erika Tymrak against Reign right back Elli Reed.

From there, the mood at Starfire Stadium shifted, and in an instant Kansas City settled into the game. Rookie Jenna Richmond ripped a half-volley from 18 yards out that ticked off the side of the post, and a minute later, Rodriguez found net for the opener.

Seattle nearly answered a minute later, when 2014 league MVP Kim Little forced Nicole Barnhart into a kick-save at the near post.

Barnhart came up big again to start the second half before Rodriguez scored her second, helping lift FC Kansas City to the title after the Blues fell in the semifinals last season.

And while a flurry of chances at the end of the match for Seattle nearly produced an equalizer, one goal late was all the Reign could create. Rapinoe’s goal game seconds after substitute Mariah Nogueira hit the crossbar on a header, and Rapinoe and Fishlock both sent chances wide in second-half stoppage time.

“There comes a point when you’ve got to go for it and we went for it at about 80 minutes by going three at the back and pushing bodies forward,” Reign FC coach Laura Harvey said. “It paid off, it just probably didn’t pay off early enough for us.”