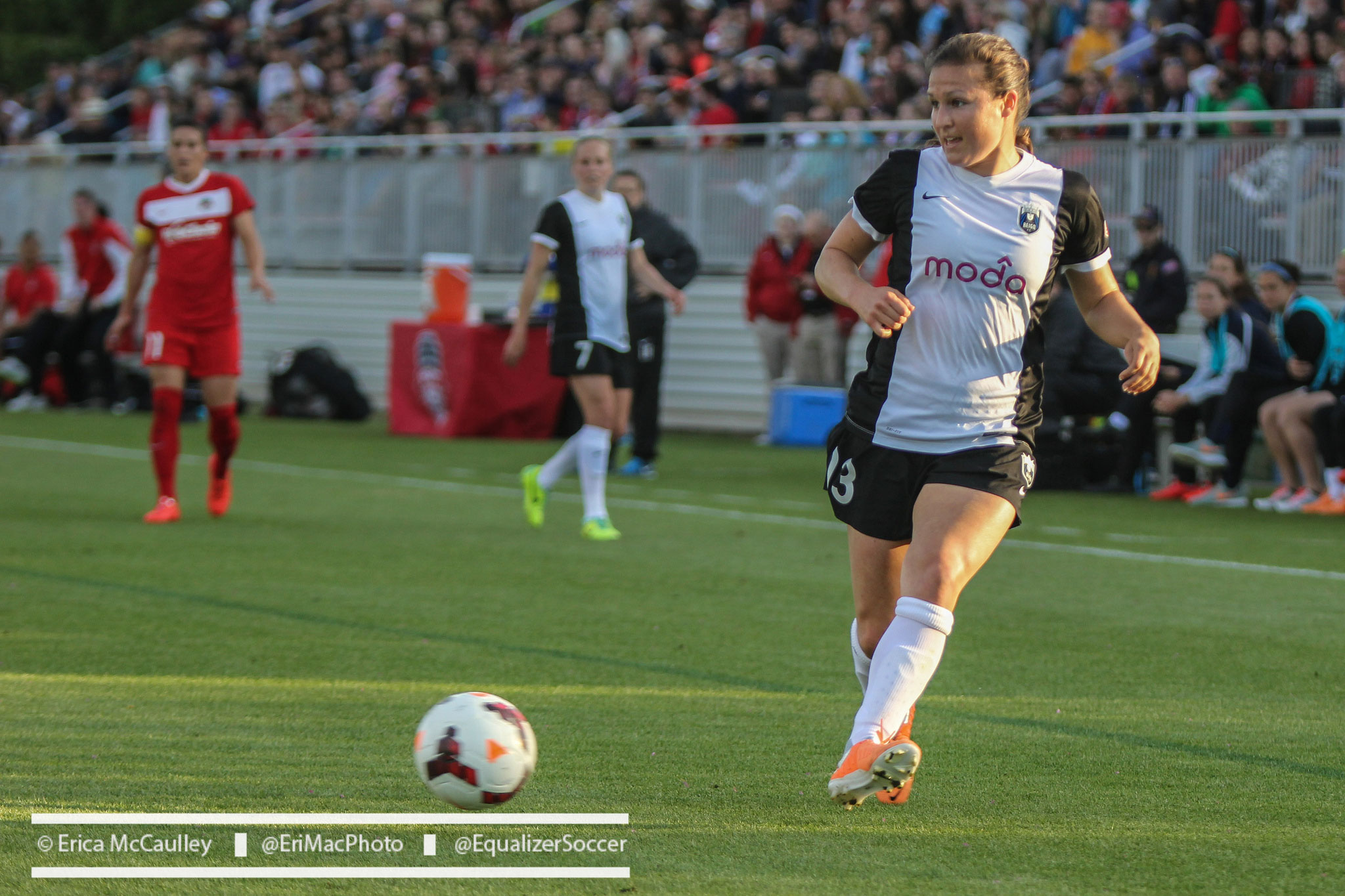 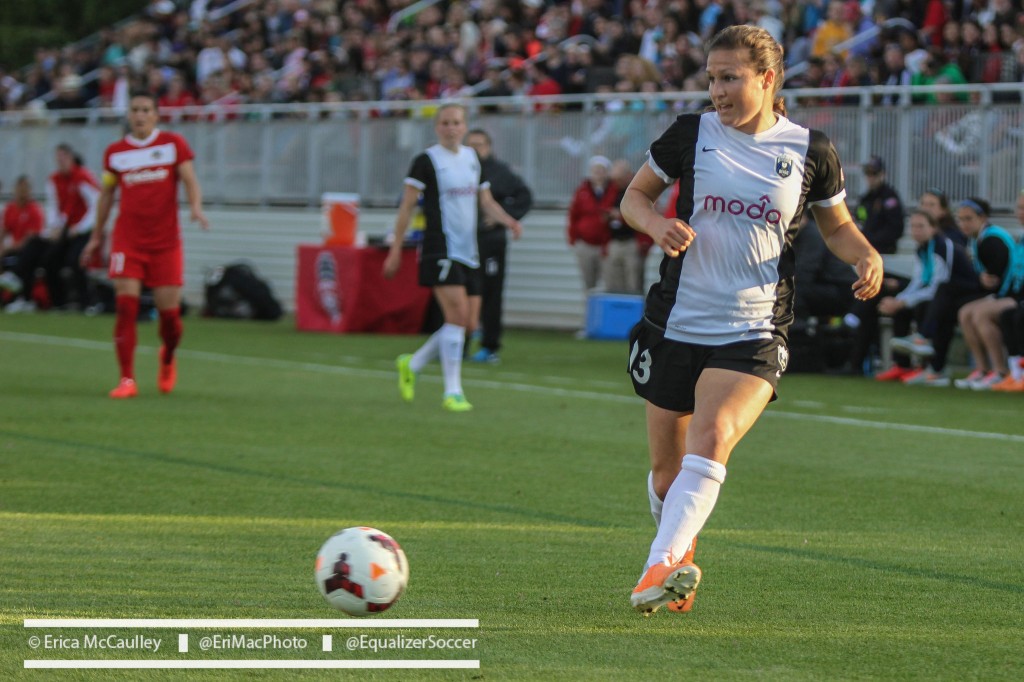 Kendall Fletcher has been a key addition to a league-best Seattle Reign FC defense. (Photo Copyright Erica McCaulley for The Equalizer)

TUKWILA, Wash. – From second-from-bottom, unremarkable team in 2013 to far and away league-leaders and most dominant team this season, Seattle Reign FC’s transformation has been nothing short of incredible.

Kim Little’s insertion into the side has drawn the headlines. The 24-year-old Scotswoman took the league by storm this season, scoring a league-high 16 goals en route to an obvious MVP selection.

Seattle’s front six – which is interchangeable with about eight players – is in large part why the Reign lost only two of 24 regular season games and are hosting Sunday’s NWSL final against FC Kansas City. But somewhat lost in the glamour of the goals and the fluent buildup play from the Reign is a defense whose personnel hardly changed, but whose performance morphed into the league’s best.

[MORE: Complete coverage of the 2014 NWSL final  |  Deines, Kopmeyer make most of chances]

The addition of center back Kendall Fletcher and the inclusion of Hope Solo for the full season after an injury to start 2013 are the only big changes. Elli Reed still mans the right side, Stephanie Cox the left and Lauren Barnes in the center of the defense.

But unlike last season’s disjointed effort and revolving door at center back – Kaylyn Kyle, Emily Zurrer, Kate Dienes, Kiersten Dallstream – collectively, the back four has turned into the league’s best, giving up 20 goals in 24 matches and never conceding more than twice in a single match, in a league where scoring increased dramatically in year two.

“I think a lot of the work that they did last year has paid off this year,” says Fletcher, who spent time in Australia and Sweden since WPS folded, before coming back to the United States. “I know a couple of us have come in, but you can see the work that they did and the environment that they tried to create and the way that they tried to play. It doesn’t just come together in one season. They did a lot of the work last year and then obviously we’ve come in and been able to jump into that really well.”

Fletcher earned Best XI honors and was arguably the best center back in the league in 2014 (with her primary competitor being Becky Sauerbrunn, the two-time NWSL Defender of the Year, lining up on the other side of the field on Sunday). Barnes and Cox were voted into the second XI, and the absence of Reed from either is a curious omission.

“This is a wonderful back line to play with,” Fletcher said. “It’s hard to speak about any one of us individually, because I think as a back line, as a group we are one of the best if not best defenses in the league. That’s a credit to all of us, but collectively not individually.”

Fletcher’s deflection of praise aside, she’s been nothing short of brilliant all season for the league’s best defense.

“I think Kendall has been one of our unsung heroes,” Reign coach Laura Harvey said. “We got a lot of media attention last year and in the buildup to this season about our back line and how it hasn’t changed that much. I think if you look at our back line from last year to this year, she’s the only real addition to that. And I think she’s been a huge addition.”

Reed, who says the MCL sprain in her left knee that held her out of last weekend’s semifinal is “feeling good” and “getting better every day,” has seen the changes first hand. Fletcher has brought a comfort to Reed’s game, and Hope Solo’s 0.90 goals against average in net – plus Haley Kopmeyer’s 0.50 GAA in four games – has completed the defensive puzzle in the Emerald City.

“I think Hope is the best goalkeeper in the world, so she saves us here and there, absolutely,” Reed says with a laugh, acknowledging the help. “It’s just a confidence knowing that you have that behind you. With Kendall, I think that we’ve had a really good partnership over this season. I’ve never played with her before, so we’ve gotten to learn how each other plays throughout the season and I trust her 100 percent. I know where she’ll be and when I can play her the ball. It’s been a really good partnership for us.”

On Sunday, Seattle takes on FC Kansas City in the league final (“the right final,” as Fishlock and many others have called it). The Blues were long a lock for the No. 2 seed in the league, much like the Reign’s place atop the NWSL all season. Amy Rodriguez scored 13 goals in the regular season – second only to Little – and 2013 MVP Lauren Holiday had seven assists in her playmaking role.

The Blues could line up in their customary 4-2-3-1 formation, where Rodriguez is a focal point up top, Holiday plays creator, Erika Tymrak works her magic on the wing and Jen Buczkowski and Jenna Richmond destroy and create from deeper roles.

“I think both teams have similar styles. We both pride ourselves on having good shape,” Reed said.

Kansas City has given the Reign some trouble this season. Seattle beat the Blues in their first meeting, but tied them twice. Kansas City led in both of the latter matches, forcing Seattle to find equalizers.

“They keep the ball against us better than most teams do, which is something that we don’t like because we like to high pressure,” Fletcher said. “When we get impatient with that, when we get frustrated with that, they tend to have a bit more success. When we are able to impose what we do well and keep our shape well and make it hard for them, then I think it shifts back in our direction. But I think they do every similar things that we do to them, and so it’s just a chess match.”

Practices often can’t emulate matches, but in Seattle’s case, the best preparation for a potent FC Kansas City attack is, by the numbers, an even better offense: Seattle’s own.

“As a back line, we go against our attack every day in training,” Fletcher said. “If you want to get prepared for a game, that’s a pretty good way to do it.”