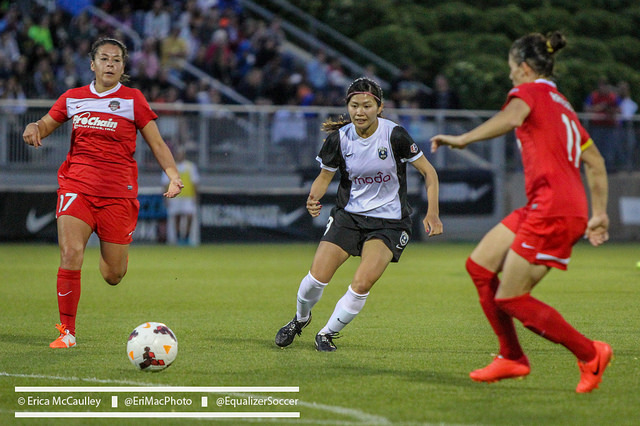 Nahomi Kawasumi made the jump from Japan to Seattle and quickly blended her game with the Reign’s. (Photo Copyright Erica McCaulley for The Equalizer)

TUKWILA, Wash., — Ask anyone to click off the names of the most important Seattle Reign FC players and it could be awhile before the name Nahomi Kawasumi comes up. But the player known simply as “Naho” has been vital in the club’s turnaround that now stands one win from a championship.

“Just love her,” Megan Rapinoe said of her Japanese teammate, who was named to the NWSL Best XI this week. “First and foremost she’s just a great person. She’s come right in…knowing how difficult it is to go overseas, if you know the language or not, it’s still difficult. It’s far from home and you have to adjust to so many different things. Just a huge credit to her to be able to come and really fit seamlessly right in. We accepted her right away.”

Naho was a regular player on the Japan teams that upset the United States in the 2011 World Cup final and nearly again before settling for the silver at the Olympic Games a year later. But she never considered playing club soccer anywhere besides Japan until this summer.

“Last year at the beginning of the season I just felt I wanted to come here,” Kawasumi said through a translator. “If something comes to my mind I just do it. And this was something I decided.”

Her decision has yielded great things for the Reign. Kawasumi plays the game with an astute, tactical awareness and can cross the ball on a dime with either foot.

“She’s unbelievable. She can pick anyone out with both feet, which is brilliant,” Rapinoe said. “It’s always nice being on the far post, I know that if I’m open she can find me. It’s been a pleasure to play with her.”

Rapinoe stopped short of calling herself and Kawasumi the two best crossers of the ball in the world—“You can’t say that about yourself”—but their coach Laura Harvey said, “For me they are.

“Naho is an exceptional crosser of the ball. And Pinoe is one of those players that’s just so unorthodox in the way that she does things, but the end product is always good. So you get quality from both sides of the field.”

Asked where she learned how to cross, Naho said it was mostly out of necessity. “I didn’t learn, but since I can’t finish the cross that comes my way so I just realized that if I put a good cross then somebody else can finish.”

Kim Little, in a separate interview, also threw left back Stephanie Cox into the discussion for best crosser of the ball on the planet. That debate aside, the Reign use their precision passing to make up for their decided lack of height all over the pitch.

“Oh my God I think so,” Rapinoe said when asked if she was the tallest Reign attacker. “This is so bizarre. I’m having to go in and be a marker on corners. I don’t really see myself as a tall player.”

Harvey said the lack of a traditional target player was not a factor in building the team over the winter. “I think we’re a team that can score from many different angles. You look at Syd (Leroux) and Bev (Goebel), they add a little bit of height to that. But yes our wide players are short. Jess (Fishlock) is surprisingly very dominant in the air for someone who’s so small. But we brought them in because of the talent that they have with their feet. It’s proven to be successful so far and hopefully it will be (in the final.)”

Rapinoe reminded everyone that, “Even Naho scored this year with her head.” (July 27 against the Thorns.)

Naho is not only good with her feet, but with her ideas.

“For someone who doesn’t speak the same language as what we do, she’s very vocal inside the locker room in terms of things that she thinks we need to be better at,” Harvey said. “At half times she gets the tactics board out and shows the players what she thinks should be happening. Nine times out of 10 they’re exactly what I was thinking myself.”

Everyone around the Reign agrees that she has helped make the club better by blending parts of her Japanese soccer heritage with the Reign’s style.

“As a player she’s just fantastic,” Rapinoe added. “She’s not the biggest or the fastest, but she finds space wherever whether that’s wide or coming in. She can score goals, she can set up. (She brings) that style from the Japanese national team into this team.”

Kawasumi leaves after the final to return to INAC Kobe in Japan. She has been telling anyone who has asked that she would like to be back with the Reign in 2015, but adds, “I don’t promise.”