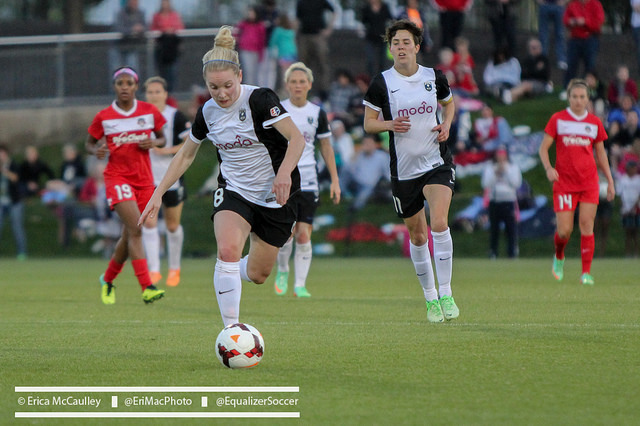 Harvey said she had “no doubt that [Little’s] creativity and goal-scoring ability will prove an exciting proposition for the NWSL.”

Man, did Harvey undersell that.

Fast-forward and Little is the MVP, having put together the most dominant season-long performance in the National Women’s Soccer League’s two-year history. She scored 16 goals – six from the penalty spot – and added seven assists en route to leading Seattle to Sunday’s NWSL Championship against FC Kansas City.

Little is, quite simply, the focal point of the Reign.

The 24-year-old, 5-foot-4-inch Scotswoman started her career with Hibernian in Scotland before a 2008 move to Arsenal, where she played under now Seattle Reign coach Laura Harvey. 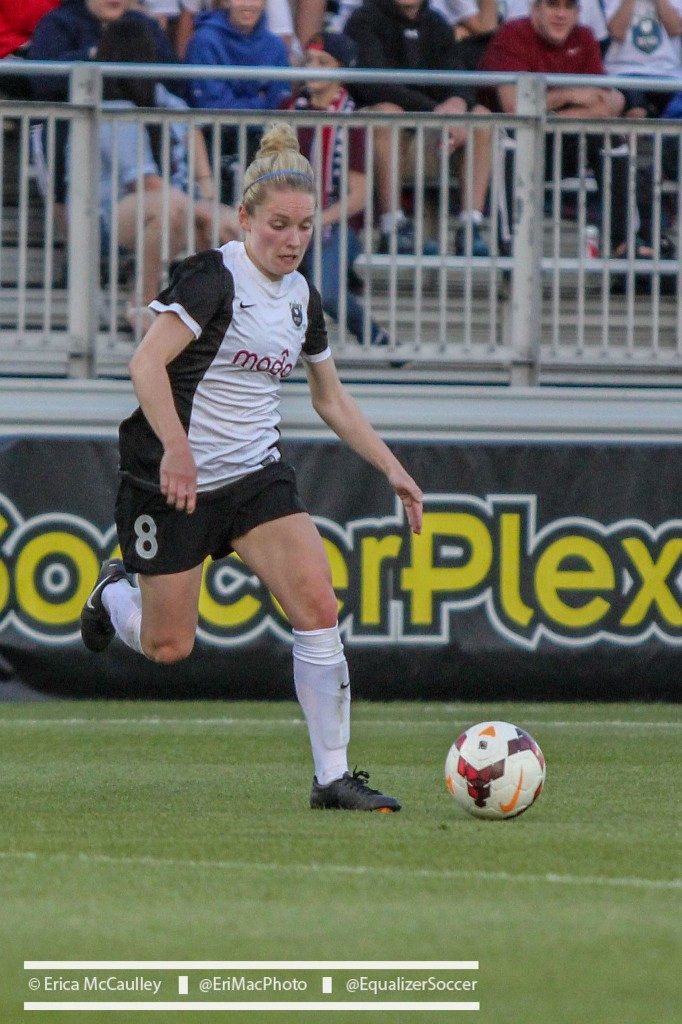 Kim Little said she had no expectations when coming into the NWSL, where she has thrived. (Photo Copyright Erica McCaulley for The Equalizer)

Harvey took over the Reign from its inception, guiding the team through a rough first season in 2013. In her first offseason, Harvey called her old player, Little, to discuss the idea of playing in the NWSL. Harvey says she told Little that it would be a challenge, and the midfielder has risen to the occasion and then some.

“She’s gone to a different level then when I coached her at Arsenal,” Harvey said. “Her game’s just gone two or three steps higher up, and I always believed she had the potential to be one of the best players in the world and I think she’s proven it in this league that she is.”

Little was up for the challenge of playing in the NWSL, but humbly said Saturday that she entered the league with no expectations.

“When I played with Laura at Arsenal, I occasionally played the No. 9 position at different stages of the season,” Little said. “But my favorite role, I think when I’m at my best, is when I play at the 10. I enjoy going forward in the No. 9 position. I feel like I can find spaces where I can get a shot or a goal later in the game.”

What followed was a season of highlight reel goals and assists, as well as a vision for the field few – if any – have across the league. FC Kansas City coach Vlatko Andonovski’s side — and particularly holding midfielders Jen Buczkowski and rookie Jenna Richmond — is tasked with stopping Little , much like Portland’s Veronica Boquete in the semifinal.

“The thing is with Little, is she does everything that Vero does, but also she adds a little more offense individually, and we are going to have to bring numbers around her a lot quicker than what we did last game. Otherwise, I think she’ll destroy us. She’s good.”

Among Little’s 16 goals were critical, headline moments that kept the Reign unbeaten through the first 16 games of the season.

Little’s first seminal moment came on May 10, when she scored an 89th minute goal away against rival Portland to lift Seattle past the Thorns in the biggest match of the franchise’s short history.

She scored another crucial goal on May 25, a 92nd minute equalizer against the Western New York Flash. And Little would strike again on August 9, finding an 89th minute equalizer vs. the Washington Spirit. Whether it was clutch timing or a world-class goal from the run of play, Little came through when Seattle needed her, and Seattle ran through Little. In last weekend’s semifinal the Spirit mostly contained Little in midfield, but when it came time to level the match from the spot, Little calmly accepted and conquered the challenge — twice as it turned out after an encroachment call forced a retake.

“You kind of take for granted sometimes when you play and train and play in games with these players, and they have these incredible, special moments where it just kind of hits you and you feel really lucky to be able to play together,” Rapinoe said.

Little has produced plenty of those special moments all year. On Sunday, she’ll be looking for one more.