The Lowdown: My 2014 NWSL Awards Ballot 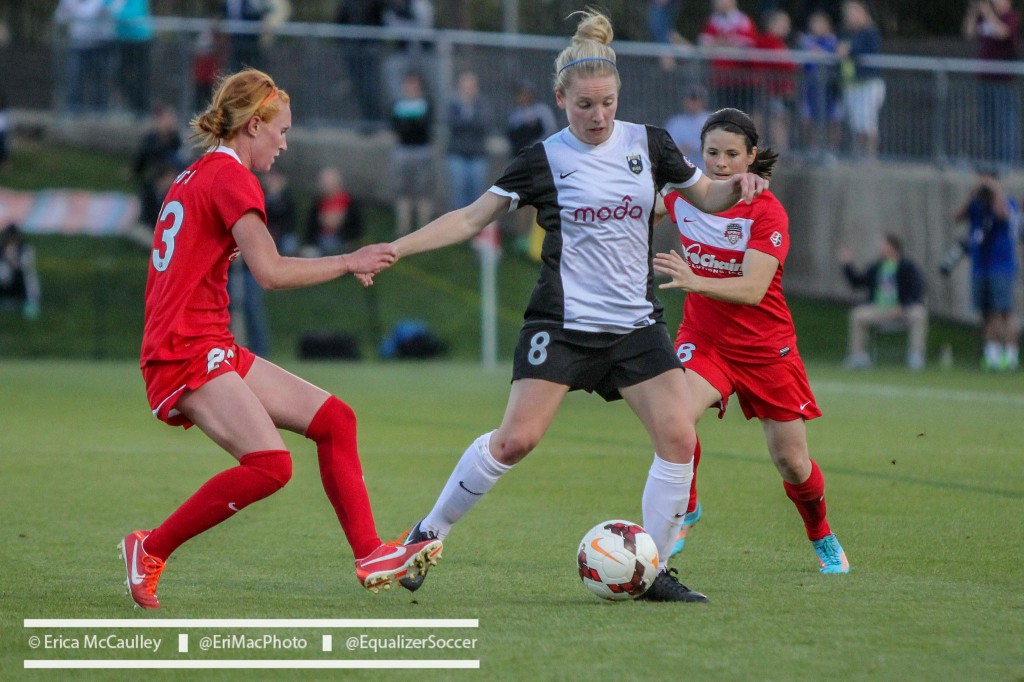 Kim Little will likely be named the 2014 NWSL MVP. She earned the votes of Dan Lauletta and Jeff Kassouf. (Photo Copyright Erica McCaulley for The Equalizer)

Here is my 2014 NWSL awards ballot. Votes were due prior to the start of the semifinal matches, and performances in those matches have no bearing on these picks or anyone else’s who had a ballot.

Most Valuable Player
Winner – Kim Little, Seattle Reign FC: Quite simply, Little was the best player on the best team. She easily won the Golden Boot with 16 goals but more importantly put her stamp on just about every game with her deft touches and vision in midfield. On occasion, when needed, she shifted up top late, where she was able to find goals from a higher spot on the field.

ALSO CONSIDERED:
Allie Long, Thorns – Thorns’ best midfielder and most consistent player, kept club afloat early while Alex Morgan rehabbed and Christine Sinclair struggled.
Carli Lloyd, Flash – Quietly had another outstanding season, was much of the reason a surprisingly bad Flash team stayed in contention as long as they did.

Defensive Player of the Year
Winner – Elli Reed, Seattle Reign FC: Enjoyed a breakout season at 24 (she turned 25 on August 10) dominating the right side for the Reign each week. Reed closed off the opponents’ left as a viable attacking option and supplemented her team’s attack with frequent and intelligent overlapping runs.

ALSO CONSIDERED:
Becky Sauerbrunn, Kansas City – Another masterful season in charge of a back line that hardly missed a beat despite two new faces.
Kendall Fletcher, Reign – The glue in the middle of a Reign defensive unit that began the season with question marks and finished it as a strength.

Goalkeeper of the Year
Winner – Hope Solo, Seattle Reign FC: Rebounded with a beautiful season keeping the back line organized and playing the steadiest, most consistent goalkeeper if any keeper in the league.

ALSO CONSIDERED:
Alyssa Naeher, Breakers – Played wonderfully while under siege much of the season, but hard to justify the top spot with such gaudy goals against numbers.
Nicole Barnhart, Kansas City – Led the league in shutouts for second straight year but was somewhat average on the bookends of six clean sheets in a row.

Rookie of the Year
Winner – Julie Johnston, Chicago Red Stars: Her coach Rory Dames told her when she reported to training camp that the back line was hers to lead, and she thrived in the role. From the moment she stepped on the field opening night Johnston never looked out of place.

ALSO CONSIDERED:
Jenna Richmond, Kansas City – Stepped into a challenging role and quickly made Blues’ fans forget the loss of Desiree Scott to England. Defensively sound and comfortable on the ball.
Crystal Dunn, Spirit – Battled injuries and moved in and out of various roles, but added something to the side no matter where she wound up.

Coach of the Year
Winner – Mark Parsons, Washington Spirit: Took a team that won three games all of 2013, made some tweaks, and then went about instilling in them the needed mentality to grind out results even on nights when they were not at their best. Along the way he steadfastly refused to get sucked into any controversy whether it be about poor refereeing or scheduling inequities.

ALSO CONSIDERED:
Laura Harvey, Reign – Got a talented group of mostly new players to gel quickly and keep the petal to the metal through the entirety of an extraordinary season.
Vlatko Andonovski, Kansas City – Stayed patient through early struggles and eventually unlocked the riddle of the 2014 version of tika taka soccer, NWSL style.

Best XI (no commentary for players listed above)

ALSO CONSIDERED:
Stephanie Cox, Reign – A year ago she was up in the air about resuming her career after having a baby; now she’s the favorite to start at left back at the World Cup.
Cat Whitehill, Breakers – Another solid season playing next to a revolving door of center back partners
Christie Rampone, Sky Blue – Foot injury hampered her early in the season, but still as tactically and fundamentally sound as any defender in the world.

ALSO CONSIDERED:
Becky Edwards, Dash – Returned from ACL surgery to play every minute before season finale and restored her position as one of, if not the, best defensive midfielders in the U.S.
Lori Chalupny, Red Stars – Always active and involved in the attack, she’s the engine that made the Red Stars’ midfield run.
Lauren Holiday, Kansas City – Numbers were down mostly due to the arrival of Amy Rodriguez but still controlled many matches for only side to host a semifinal in both seasons.
Jess Fishlock, Reign – Addition of Little did wonders for her game allowing her to sit back and start counters while being more selective about when to join the rush.
Jen Buczkowski, Kansas City – Does this generation have a more underrated player?

Forwards
Nahomi Kawasumi, Seattle Reign FC – Rare forward who can finish and distribute with world class precision. No one in the league sends in a more well meant or well struck cross. Her instant connection to Little got the Reign off and running from the get go.
Jodie Taylor, Washington Spirit – Overcame a slow start to carry the scoring load for a playoff team, and did it under pressure as the Spirit did not have much scoring depth on the roster.
Heather O’Reilly, Boston Breakers – Always one of the hardest workers on the field, that work resulted in her best club season and made her a shining light during a season to forget in Boston.

ALSO CONSIDERED:
Amy Rodriguez, Kansas City – Scored a ton but in bunches and had too many games where she failed to capitalize to get her in the first team.
Nadia Nadim, Sky Blue – Her six-match run was something to behold but can’t justify putting a player on the Best XI who played a quarter of the season.

Jeff Kassouf’s Best XI (so you can hate on two people, not just one)

Reasoning in brief: Good defending was somewhat hard to come by outside of Seattle and Kansas City this season (and a hat tip to Chicago), so I went with the three defenders who were very much a cut above the rest this season. Midfield candidates were loaded this year, and as tough as it was to not include Lori Chalupny — who does so much off the ball and not on the stats sheet — the five in there were all phenomenal. Amy Rodriguez carried FC Kansas City at times up front, and Jodie Taylor did the same. As a full-season starter, Jess McDonald probably makes the Best XI, but I’m not sure she made many ballots (though she deserves to).

The final regular season match, hosted last Wednesday by Sky Blue, drew 1,328. The playoff match in Kansas City attracted 2,997 and there were 4,540 on hand for the Reign’s Sunday night semifinal. Here are the final numbers for all nine NWSL teams.

Here are a few soccer-related takeaways from Week 20:

— The Reign-Spirit match was a fascinating one, partially because I think Mark Parsons offered a bit of a blueprint as to how to contain the Reign. By playing balls over the top throughout the night, the Spirit stayed away from giveaways in dangerous areas—see the game-winning goal when the opposite happened—and made it difficult for Jessica Fishlock and Keelin Winters to quarterback counterattacks. And that helped Tori Huster close down Kim Little more often than not. Still it was not enough as a bevy of missed chances and the never-panic mentality of the Reign decided it for the home side.

— In Kansas City, the Blues flipped the script from 2013 by gradually bringing the game to the way they wanted to play it. And once they got the lead and had the bulk of the possession, the Thorns were halfway back to Portland already. Rarely has a team played such a fully disciplined, defensive match the entire 90 minutes of a playoff match. It was spearheaded by Jen Buczkowski who shadowed Veronica Boquete all afternoon. And one has to wonder if Christine Sinclair was ever 100 percent physically this season.

— Credit to Sky Blue and the Dash for putting on a good show in Wednesday’s makeup game that no one could have been too enthused to play.

— Cheryl Bailey said the likelihood is that NWSL will play a 20-match schedule in 2015 with a short break around the World Cup in June. There are other whispers of a September finish—something WPS players were apoplectic about in 2010—but no confirmed news in terms of the start and end dates.

— Veronica Boquete has signed with FFC Frankfurt for the 2014-2015 season. A release from the Thorns had something of a good-bye tone, but Boquete’s quote made it seem like the door was open for a return to Portland.