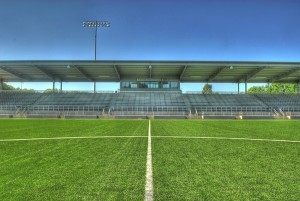 Sunday’s NWSL championship match will be played at Starfire Soccer Complex in Tukwila, Wash., since Seattle Reign FC’s usual venue in downtown Seattle, Memorial Stadium, is being used all weekend for a music festival called Bumbershoot.

CenturyLink Field wasn’t an option on Sunday due to preparations for the Seahawks’ Thursday opener, and the Reign couldn’t book a Saturday doubleheader with the Sounders because the ESPN time slot was locked in.

So instead, the final between FC Kansas City and Seattle will be at the Reign’s 2013 home, and it appears the match will sell out. The venue only holds around 4,500 fans, although the exact capacity for Sunday has not been revealed, as of Tuesday afternoon, there were only standing room tickets left on sale.

Only standing room tickets remain for the NWSL Championship Match. Get yours at http://t.co/B2CR7De7G3

Creating that sort of demand actually makes Sunday a hot ticket. But one has to think that there’s a missed opportunity here to bring in a crowd two or three times larger than that for a final.

But hey, at least there is this:

Check back with The Equalizer for on-site NWSL final coverage beginning on Thursday.