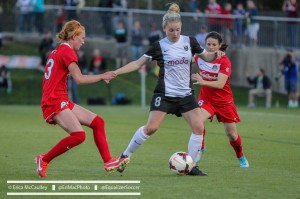 Kim Little scored from the spot vs. Washington to help send the Reign through to the final. (Photo Copyright Erica McCaulley for The Equalizer)

Seattle Reign FC are set to host the 2014 NWSL Championship after rallying for a 2-1 victory over the Washington Spirit in Sunday night’s semifinal at Memorial Stadium.  Megan Rapinoe scored the game-winner in the 82nd minute after Kim Little had gotten the Reign level from the penalty spot.  Earlier, Veronica Perez came off the bench and put the Spirit ahead 1-0.  But a series of early misses and a Hope Solo save of a Diana Matheson penalty kick that would have put the visitors back on top ultimately did in the feisty Spirit.

The Reign trotted out a lineup that did not include right back Elli Reed.  In her place was Lauren Barnes with Kate Deines in the starting lineup taking Barnes’ spot in central defense.  And the Spirit came out with some early chances, two of which were on the foot of Kerstin Garefrekes.  She got in on a direct, switching ball from Tori Huster in the 3rd minute but did not get enough on the shot to make it difficult for Hope Solo.  Jodie Taylor had a shot off the ensuing scrum, another easy straightforward save for Solo.  Three minutes later, Nahomi Kawasumi got off a hard shot that Ashlyn Harris dove to knock away for a corner kick.  Off the corner, Kim Little got a shot on goal forcing Harris into another save.

All of that happened before seven minutes were played and yet most of the talking points on this one came after halftime.  The Reign gradually took control of the possession towards halftime but were left with nothing but zeroes on the scoreboard.  The same 22 reappeared for the 2nd half until Spirit coach Mark Parsons brought in Veronica Perez for Yael Averbuch, who struggled on the night.  Less than three minutes later, Perez made good on the decision.

The play began with Christine Nairn driving a long ball to Diana Matheson in the left corner.  Alex Singer came over to help as did Nairn and they knocked it around, eventually drawing an extra defender to Matheson while Perez snuck unmarked into the box.  Matheson found her and the Mexican international took a touch with her right and then beat Solo with her left to give the Spirit the lead.

[MORE: Parsons proud of Spirit’s strides made despite loss]

The Spirit held onto the lead as Huster continued to bottle up Little in midfield and the tactic of playing over the top neutralized Jess Fishlock and Keelin Winters’ ability to run counters.  The Reign did push forward in the 70th minute with Rapinoe driving a ball into the box for Sydney Leroux.  The ball was a bit long and Leroux had to reach out to try and work some magic but Toni Pressley came over to block it.  The referee judged Pressley to have blocked it with her hand and whistled for the Reign to go to the spot.  Little had to make the kick twice, as Jess Fishlock was deemed to have encroached the area, but either way the NWSL Golden Boot winner’s spot kick evened the match.

The moments immediately following Little’s penalty saw the Reign go on the front foot in pursuit of the match-winner.  But in an instant the Spirit had a chance to go back in front.  Nairn drove a long free kick into the 18 and Kendall Fletcher flicked it right off Deines’ hand for a penalty.  Solo read Matheson all the way and made a two-handed save, pushing it up off the crossbar and out of danger.  Taylor had one more quality chance but had her shot blocked.  And that was about all the Spirit had left offensively.

Rapinoe put the match on her shoulders in the 82nd minute.  The Spirit had the ball along their backline and Rapinoe moved in to challenge a ball played to Pressley.  Instead of booting upfield, Pressley elected to take a touch and Rapinoe swooped in to take it away.  With left back Alex Singer caught helplessly up-field, Rapinoe had all the space she needed to dribble into the box and crack a near post shot with her right foot.

The Reign will now get ready for FC Kansas City, Sunday at Starfire Stadium (Memorial is unavailable next weekend).  They were 9-0-4 at Memorial Stadium including a 3-2 victory over FCKC on May 14.  The clubs drew both matches in Kansas City.

Here is a quick look at Rapinoe’s goal: