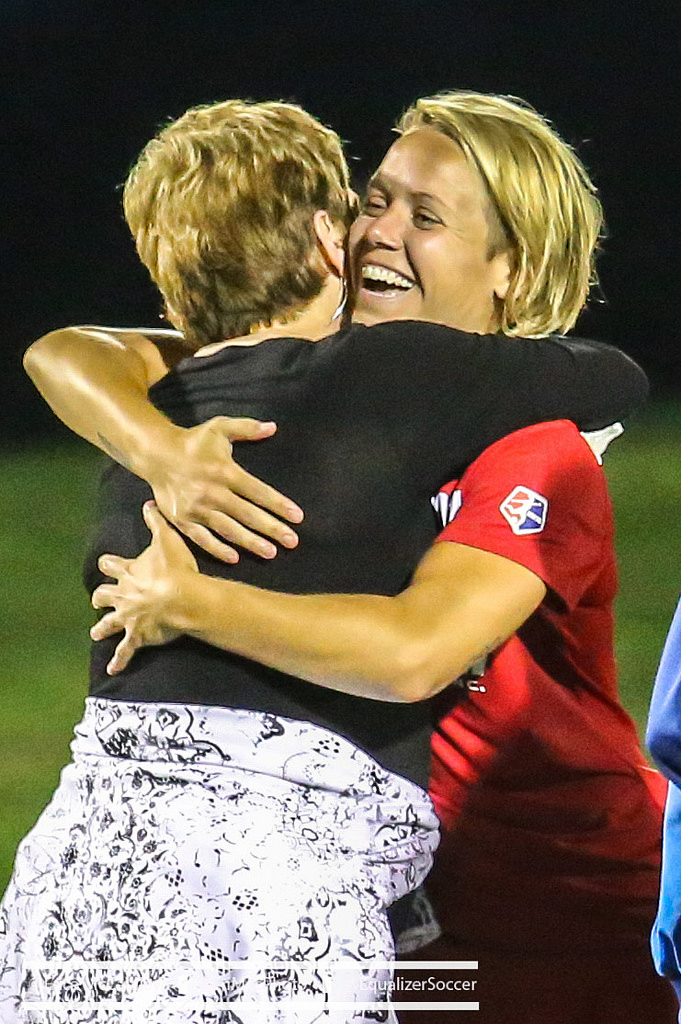 Too often people look at easily quantifiable statistics when discussing professional athletes and what distinguishes the noteworthy ones.

Lori Lindsey’s 31 caps and one goal with the U.S. women’s national team do not seem particularly remarkable at first glance. Those statistics however, are truly a testament to the midfielder’s unparalleled persistence and dedication to achieving her professional goals.

“I think to have the perseverance to push through and keep working at it especially with all the younger players that had come through says so much about who she is,” said Steve Swanson, Lindsey’s college coach at the University of Virginia. “She never doubted herself. She’s worked extremely hard. She’s always looked at her game and said ‘how can I get better, how can I get better’. She made herself a national team player over the course of time after she graduated. I think she deserves a lot of credit for that. I wish more people would take that attitude…Some would tend to make excuses or quit or not persevere like she did.”

Lindsey, whose Washington Spirit play at Seattle on Sunday in an NWSL semifinal, will retire at the end of the calendar year.

She graduated from Virginia in 2001 after receiving the ACC Player of Year award in both her junior and senior seasons. She then moved in the professional ranks in WUSA playing at first with the San Diego Spirit and then with the Washington Freedom. Although she had been featured on several youth national teams, Lindsey hadn’t cracked the full team yet.

After her team won the league championship 2003, WUSA closed up shop leaving Lindsey, like so many others, with no place to play. She could have called it quits and moved on in her life like most of her teammates who weren’t on the national team did. Instead, Lindsey continued to work hard at improving her game. She suited up for the Washington Freedom W-League side for large portion of the period between leagues and was part of the Freedom W-League championship side in 2007.

During the time between the folding of WUSA and the beginning of WPS, Lindsey did earn a cap with the full team in 2005, but it wasn’t until four years later that she earned her second. But 2010 was a breakthrough year for Lindsey when she earned 13 caps with the U.S. national team. The following year she was named to the 2011 Women’s World Cup roster. She also reached the WPS final in consecutive years with the Philadelphia Independence in 2010 and 2011. For the past two seasons, she’s plied her trade with the Washington Spirit in the NWSL.

On the field, Lindsey is known for her high soccer IQ and her ability to send teammates perfectly-placed passes in the final third. Her current head coach, Mark Parsons, called the midfielder, “one of the most intelligent soccer brains out there.”

It’s nearly impossible to talk about Lindsey’s career without discussing her sharp wit and gregarious personality. Lori “Lightning” Lindsey and her “roomies for life” cohort Megan Rapinoe have made some of the best lighthearted U.S. national team videos to date, providing an avenue for fans to connect with their sports heroes.

And Lindsey’s shenanigans pre-date those videos. Last Saturday, Swanson recalled a trip to Brazil when Lindsey was an graduate assistant at Virginia. She was charged with the task of recording a game. Before the match, Lindsey relayed word to him that she was having trouble with the camera. Swanson looked up in the rafters only to find his assistant in a bathing suit trying to catch some rays.

For U.S. defender Becky Sauerbrunn — who also played with Lindsey in Washington — Lindsey’s sense of humor and personality are exemplified by her nickname.

“Calling herself ‘Lightning’ is just like really ironic because she’s always talking about how fast she is not.” Sauerbrunn explained. “She just embraced Lori ‘the Lightning’ Lindsey so much it was kind of the epitome of Lori, just completely embracing everything she’s not, but loving it anyway.”

What those outside of teammates might not realize is how important Lindsey’s personality has been to the teams she played on. Her current coach, Mark Parsons, called her the “heartbeat” of his team. He admitted that it was Lindsey’s hijinks and jokes that helped get the team through a very tough inaugural season.

“A lot of her role last year was keeping everyone smiling and alive because it was a tough season and she did that,” he said. “She dragged this team through last year on the field and off the field.”

Similarly, Sauerbrunn talked about how important Lindsey was to the Freedom 2008 W-League team they both played on. “She’s just someone that’s like a glue for a team. She just keeps everyone together.”

After her final home game last week, Lindsey reflected on her career: “I feel like I am leaving women’s soccer in a better place,” she said alluding to the growth of women’s soccer during the course of her career.

In truth, Lindsey’s impact goes far beyond the soccer pitch. In September 2012, she came out publicly in an Autostraddle article and added her voice to ever growing group of athletes advocating for an equal playing field. She’s lent her voice and image to both Athlete Ally and the Human Rights Campaign. Notably, Lindsey and Rapinoe appeared in a campaign by the Human Rights Campaign in protest of Russia’s anti-homosexuality laws ahead of the 2014 Sochi Olympics.

Lindsey’s Athlete Ally profile reads in part, “if I can reach one person or be someone’s support system then I’ll feel as if I’ve made a difference.” Undoubtedly, the midfielder has achieved this goal as well.

Luckily for fans, Lindsey’s post-collegiate career has been the antithesis of lightning, spanning over a decade. Perhaps Lindsey’s U.S. career can end with a flash though as her plucky NWSL team is the fight for the league’s championship. No matter how this chapter ends, Lindsey’s career has been impressive. She serves as a powerful reminder that with a lot hard work and perseverance and a healthy dose of laughter, it’s possible to achieve dreams both on and off the pitch.