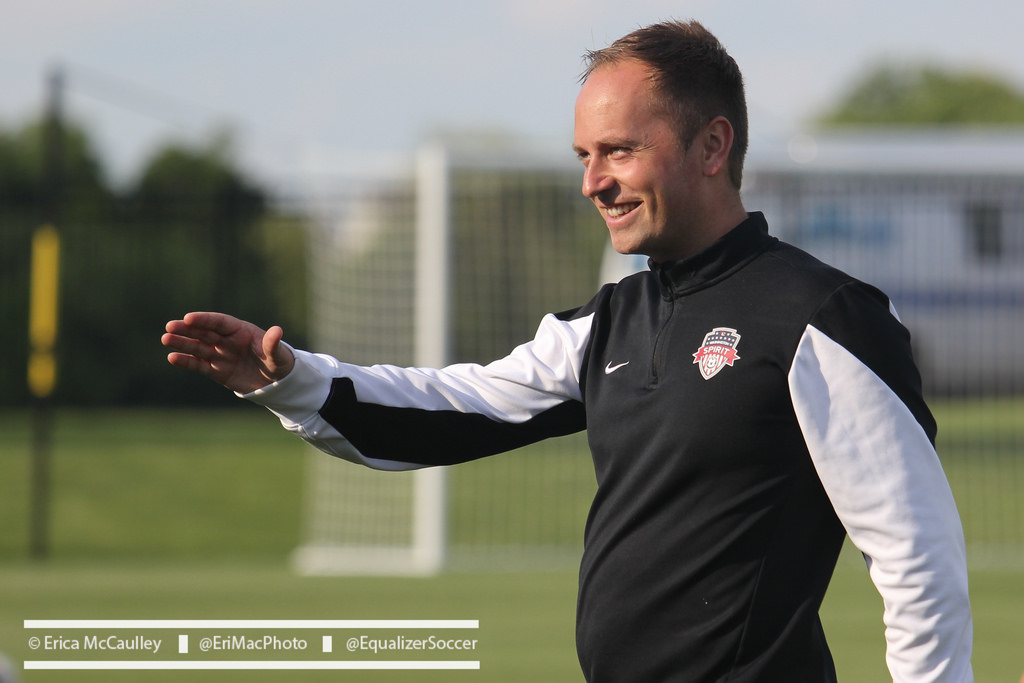 Mark Parsons and the Spirit hope for a big upset on Sunday against Seattle. (Photo Copyright Erica McCaulley for The Equalizer)

The Washington Spirit are in the 2014 NWSL playoffs. That’s not a sentence many expected to be a true statement heading into the season.

Here they are, though, preparing to take on the one team that everyone expected to be in the playoffs. It’s a classic David vs. Goliath situation. What does Washington need to do in order to have a chance to slay the proverbial giant that is Seattle Reign FC in the semifinals on Sunday?

For starters, the Spirit would do well to keep the scoreline low as the team can ill-afford a shootout. They’ve averaged a goal per game against their opponent. The team’s best offensive presence, Jodie Taylor, recently returned from a World Cup Qualifying game with the English national team on Thursday. Given the nearly 5,000-mile trek she had to make to reach Seattle, Taylor may look a little lethargic Sunday night, especially given the late start time.

Although Seattle’s Jess Fishlock made the arduous trek to play in the same game for the Welsh national team, Fishlock is one arrow in a deadly quiver of weapons for the Reign.

For Washington, the need to stay out of a shootout is further compounded by a surprise announcement by head coach Mark Parsons Wednesday that forward Lisa De Vanna would not travel with the team to Seattle.

“She wants the ball every second of the game, which is obviously a great attribute and sometimes can be frustrating. Frustrating for herself and her teammates,” Parsons commented on his decision. De Vanna’s frustration was often palpable at the SoccerPlex. Her frustration was most evident in a game against Portland on July 23 in which she removed her jersey and went to the locker room after being subbed out.

Lisa De Vanna won’t travel with Washington for the NWSL semifinal in Seattle, for reasons unclear. (Photo Copyright Erica McCaulley for The Equalizer)

Although behavioral issues have long plagued the Australian international, there’s no denying her speed added another dimension to the Spirit attack. It was De Vanna who stepped up in a big way for the club while Taylor was previously away on international duty.

Another key to Sunday’s game for the Spirit, is not allowing emotions to overcome them. Last Saturday, Parsons admitted that the occasion got to them, talking about the ability to win and control their own playoff destiny. The Spirit lost to Sky Blue 0-1 and, true to their nail-biting ways, had to wait on others’ results to learn their playoff fate. Parsons revisited this issue during Thursday’s press conference.

“Everyone was just a bit too desperate. I cannot question the physical work and the mentality,” he said. “I thought in both of those aspects everyone gave everything. We just needed to catch our breath and realize and reminder ourselves what we’re great at,” he said adding that he felt the team had an opportunity to do that this week.

For the Spirit, there are no more second chances. After allowing an equalizer in the waning moments against Seattle that would have clinched a playoff berth, and last week’s loss to Sky Blue that would have done the same, it’s now simply win or go home.

“I feel it wasn’t the end for us because what they had achieved this year and what they sacrificed and the amount they put into this club,” Parsons commented on his emotions after the Chicago game. “It’s doesn’t feel right that that’s how we go out with a performance like that because we are all capable of far more.”

Although they were confident they’d make the playoffs despite the loss to Sky Blue, the Spirit had to consider the possibility of watching this week’s games rather than playing in one of them. That’s a completely foreign concept to this season’s ever-dominant Seattle Reign (who were in the basement with Washington last season).

It’s said that a person doesn’t realize what they have until it’s almost taken away. Perhaps dealing with that possibility will help the Spirit dig a bit deeper Sunday.

Parsons was also able to announce some positive news for the club on Wednesday. Ashlyn Harris has been cleared to play following a concussion in a game against the Red Stars earlier this month. Although Chantel Jones performed admirably in the last two games, earning a draw in a game against Seattle, no doubt the Spirit defense will benefit from the likely return of their No. 1 keeper.

Regardless of the final scoreline at Memorial Stadium, Washington’s journey from abysmal last-place team in 2013 to playoff bound in 2014 has been one of the most entertaining storylines of the league so far. After all, it took until August last year for the team to record it’s first two-game winning streak. A year later, they’re a two-game winning streak away from being league champions.

The Spirit will take on Seattle on Sunday at 11 p.m. ET. The game will be broadcast on ESPN2.