In U-20 Women’s World Cup final rematch with Germany, Nigeria has chance to join world’s elite 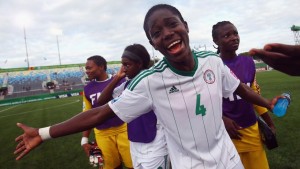 He stood stiffly next to the World Cup trophy for the media photo opportunity, not wanting to get too close to it. Nigeria has been that close before, and failed to touch it.

On Sunday Dedevbo’s team will play Germany in the World Cup final for the second time in three tournaments. Nigeria lost both matches, first in the 2004 quarterfinals – when this was a U-19 competition – and then in the 2010 final on German soil.

Dedevbo describes that 2010 loss as “woeful,” and although he wasn’t the coach then, he wants to avenge that defeat on Sunday at Olympic Stadium.

“We are hungry. We want to try as hard as possible to redeem the image of 2010,” he said on Saturday. “We know Germany is a very good team. We respect them; I want them to respect us, too.”

Dedevbo sounds like a man with a point to prove, but asked to follow-up on his pointed comment about earning respect, he backtracked, saying the final is just like any other match. Clearly, though, Nigeria sees this as a statement match; they could become the first African team to win a Women’s World Cup at any age level.

Germany has been here before, winning it twice (both years in which they faced Nigeria in the knockout stage). This is Maren Meinert’s fifth straight U-20 World Cup in charge of Germany, an anomaly of stability in the youth ranks.

As always, she’s guided her team through a tough path. Success here is nothing new, having led Germany to third in 2008 and second in 2012 in addition to the 2010 triumph.

“I’m extremely satisfied,” she told FIFA.com. “I think we’re having a great tournament. Especially when you look at our path through the competition. In the USA, China, Brazil, hosts Canada and France, who might be the best team in the world at the moment, we’ve played some great teams. Nigeria are another.”

Meinert’s squad is led by a two-headed attacking monster of Pauline Bremer and Sara Daebritz, who have five goals apiece.

But world-class German forwards – on the verge of regular minutes with the senior side – lighting up the U-20 World Cup is nothing new, either. Dzsenifer Marozsan did it in 2012, and Alexandra Popp in 2010.

What Germany must worry about is Nigeria’s big threat, Asisat Oshoala. She leads the all scorers in the tournament with seven goals in five matches.

“In this competition the Germans have faced very strong teams; the Nigerians are one of them,” Meinert said Saturday, sitting next to Dedevbo. “Oshoala, we know that we have a tough match ahead of us and we need our defense to be strong and compact in order to win.”

Oshoala, nicknamed “Seedorf” (after the footballing great Clarence Seedorf) and “Superzee” (SuperGirl), has come up through the ranks thanks to the Nigerian federation’s investment in women’s soccer, Dedevbo says.

Dedevbo says there are academies “in every center in Nigeria,” and that he has been working with some of his current players, including Oshoala for four or five years.

“In Africa, in terms of women’s football development, Nigeria is No. 1, because we have [professional league] and there are three competitions for women’s football,” Dedevbo said. “The teams that play pro in Nigeria, they have academies.”

“In Nigeria, we don’t joke with the women’s football budget.”

On Sunday, they’ll look to finish the job and join Germany, among a select few, as one of the world’s elite.