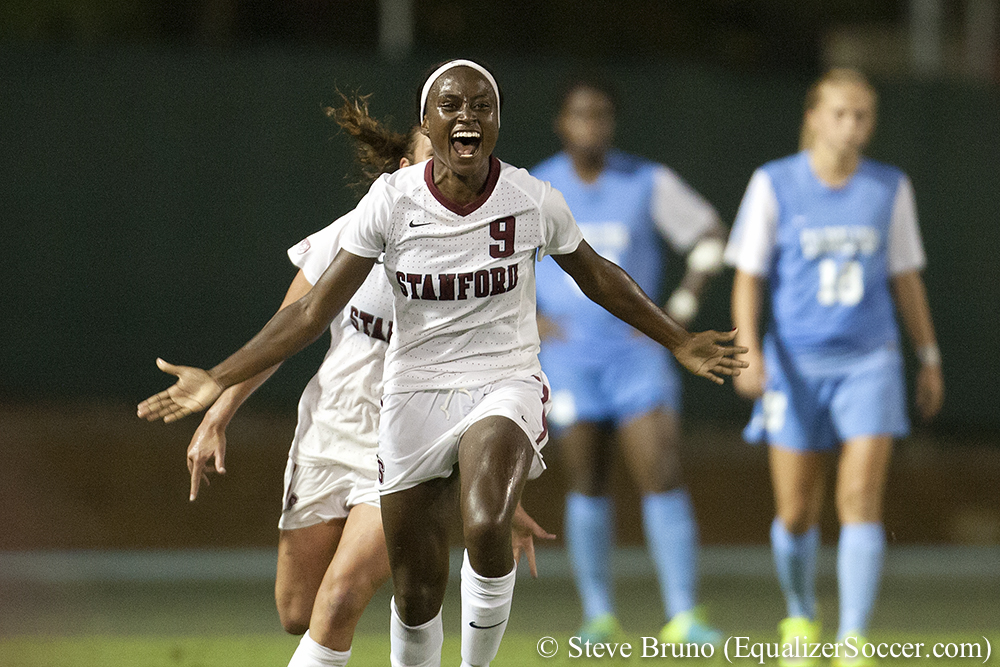 CHAPEL HILL, N.C. – “Let’s make this a night to remember,” Stanford coach Paul Ratcliffe told his players as they broke their huddle before the start of extra time against the fourth-ranked Tar Heels. Nine minutes later, Cardinal senior Chioma Ubogagu made Friday night’s season-opener a night for the record books, breaking a 0-0 deadlock to beat the University of North Carolina for the first time in program history in 13 tries.

Stanford had already had their two best looks on goal earlier in the 10-minute overtime period. With one minute left on the board, against a North Carolina team that had generally looked the better side through the first 90 minutes, the Cardinal forward broke away down the left side, going at goal after taking a feed from fellow senior Alex Doll.

“Alex kinda played me through, I took a touch and I saw a little space near-post,” Ubogagu said of her decisive score. “I thought the keeper thought I was going far-post, (so I) just put a little bend on it and saw it go through. I was really happy,” the Texas native said of her goal, adding, “I’m excited ‘cause it’s my mom’s birthday.”

The goal instantly deflated all but a small minority of the raucous crowd of 4,500 packed into Fetzer Field. The Tar Heel fans had been buzzing from the opening whistle as Carolina started the game with their typical intense, smothering offense. With the visitors unable to settle into their fluid passing game, UNC looked as if they could’ve scored at will, pressing Stanford goalkeeper Jane Campbell into action early and often, as the sophomore made five saves on UNC’s seven first-half shots.

Despite North Carolina’s best efforts, the sophomore handily rejected everything the Tar Heels sent her way. The top-rated goalkeeping recruit in the country going into the 2013 season, Campbell was thrust into Stanford’s No. 1 spot immediately after Emily Oliver’s career-ending injury. It was that baptism by fire which her coach says has given his keeper a steely tenacity in the face of such high-caliber pressure.

“A lot of it is experience,” Ratcliffe said of her big-game poise. “Last year she got thrown in as a freshman, which can be sometimes difficult, and she did well for us, but this year she just exudes confidence, she has more of a presence. She just gained so much experience from last year.” 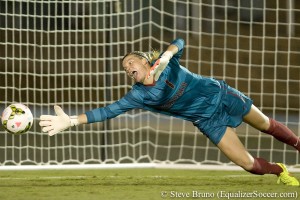 Campbell and Stanford’s experienced back line held strong as the first half drew to a close, with Carolina ratcheting up the pressure in the final minutes and dazzling fans with their deft, tricky footwork and clever combination play. A shot just wide of goal with 15 seconds left in the half ensured the visitors would end the first 45 battered but level.

“I think the first half we were weathering the storm and trying to find our legs,” Ratcliffe said of his team’s performance. “In the second half we grew as the game went on and we got stronger and stronger.”

Stanford, ranked seventh in the preseason poll, got a handle on the game in the second half, gaining more purposeful possession and going toe-to-toe with UNC as the two teams put up eight and nine shots, respectively. Ubogagu credited her team’s ability to adapt and play outside of their trademark rhythmic passing style as the key to getting back in the game after an unbalanced first half:

“Even though that’s what our rep is, we still try to find what’s open, so if keeping the ball in the back isn’t open, we’re not going to do it. We just adjust to each team and Paul had a great game strategy going into this game.”

“We knew Day One of preseason who we were playing and we knew we had UNC first,” the forward said of the team’s mentality and focus leading up to the season opener. “We prepped those two weeks with high pressure. We knew that’s what we were going to get.”

Leading the charge for UNC, Summer Green, Campbell’s teammate on the U.S. U-20 squad that lost in the World Cup quarterfinals just a week prior, put up eight shots in the game, four on target. Campbell was one of three Cardinal starters who also represented the U.S. in the U-20 World Cup. Despite the quick turnover from international play, Ratcliffe had no hesitation in starting all three, Campbell, midfielder Andi Sullivan and fullback Stephanie Amack, against the fourth-ranked Tar Heels:

“We always want to play our best players. We had three at the U-20 World Cup, so it was nice to have them back. They’ve been working hard, they’re rested and wanting to play, so we started off with them.”

Sullivan’s international experience helped her control the midfield for the Cardinal in the second half, despite playing in her first season at the collegiate level. Ratcliffe also highlighted the play of another freshman, substitute Jaye Boissiere, whose tenacious play also helped turn the tide in the center of the pitch. “The future looks really bright for us,” Ratcliffe said of his freshman duo, “because they went in there and played on the big stage and both were exceptional.”

Ubogagu, along with starting centerback Kendall Romine, is one of the few seasoned players left from the 2011 national champions. She says the championship pride handed down from the seniors is what helps motivate the younger players.

“My class are the only ones who got a taste of winning the national championship so I think the confidence level is high ‘cause everyone’s hungry and that’s such a unique presence you can have.”

Last year, eventual national champions UCLA came out east in a preseason matchup against the ‘Heels, losing 0-1 in Durham. For the Cardinal, Friday’s victory in Chapel Hill is an emphatic step in the right direction toward reclaiming their place among the nation’s elite after the Bruins stepped over them twice on the road to the Cup.

Stanford’s win was the second in a pair of underdog victories on Friday as the first match of the Carolina Nike Classic pitted unranked Ohio State against No. 10 Duke in a matchup of the 2010 and 2011 College Cup participants.

Duke came out strong as well, but were unable to capitalize on their chances. An injury to OSU’s first-choice ‘keeper Jillian McVicker gave Megan Geldernick a chance to shine in her first game in goal for OSU and the redshirt freshman’s big gloves capably filled McVicker’s void.

In the second half, Duke nearly tripled their efforts, peppering the OSU goal with 16 shots, but only two required Geldernick’s attention.

The Blue Devils would rue their missed chances midway through the second half when a breakaway in the 66th minute sent the Buckeye’s off to the races. Duke keeper Ali Kershner parried the first powerful shot away, but the ball caromed back out into the danger area where Alexis Degler struck the follow-up into the back of the net.

Although Ohio State had Canadian U-20 Lindsay Agnew in action following the World Cup, the Buckeyes’ centerpiece in attack, dynamic forward Nichelle Prince, did not feature in the match, with coach Walker citing a minor injury in Canada’s loss to Germany as the reason for her delay.

All four teams will be back in action on Sunday as the Buckeyes face UNC while Stanford and Duke can reminisce about 2011 when the two College Cup Finalists face off for the first time since.