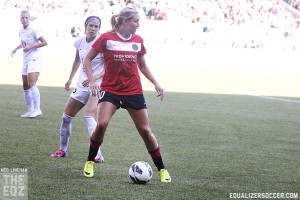 Allie Long scored the game-winner in extra time last season to put the Thorns in the final. (Photo copyright Meg Linehan for The Equalizer)

The first semifinal of 2014 is the same as it was in 2013 and the similarities are eerie.  Like last season the Thorns landed in the No. 3 spot after sputtering through a summer of discontent that had their fan base questioning club leadership.  Like last year FC Kansas City thrived over the summer but carried spotty form into the playoffs.  Like last year the Thorns are riddled with injury issues—this year’s suspects are Stephanie Catley (questionable with foot sprain) and Nikki Marshall (out with ACL tear) plus Courtney Niemiec and Kat Tarr who have been out for awhile.  Another similarity to last year is the heat.  The forecast calls for 90 degrees at game time with a high of 99.

What to watch for:  Thorns coach Paul Riley said he does not expect or want a slugfest.  Trouble is, the best way for the Thorns to control midfield is to pressure high and keep Kansas City off its short passing game.  That has the ability to be an effective tactic for the Thorns, but it could also open up their back line for counterattacks—something the Blues execute very well.

The bottom two sides from 2013 will meet for the right to play in the 2014 championship match.  The Reign just completed an extraordinary regular season that saw them play their first 16 matches without losing and later clinch the league outright before anyone else had secured a playoff spot.  The Spirit had a slower build to the top four overcoming a dodgy opener and a sluggish final week to claim the final playoff spot on a tiebreaker over the Red Stars.  The spirit are set to get goalkeeper Ashlyn Harris back after a concussion cost her the last two regular season contests.  And a troubling name on the injury report for the heavily favored Reign is Elli Reed.  The stalwart right back is listed as probable with an LCL sprain.

What to watch for:  The Spirit came within minutes of beating the Reign at Memorial two Wednesdays ago and can draw on that performance as a blue print for keeping this one close.  But the Reign were already locked into the top seed at that point so a drop in motivation was inevitable.  They figure to be back on song although due to their quick start, this will be the first time all season the Reign play with any real pressure on them.  The Spirit will require a flawless defensive effort and will be looking to stop the Reign midfield from distributing the ball wide to Nahomi Kawasumi who can break down defenses with her wicked crosses.