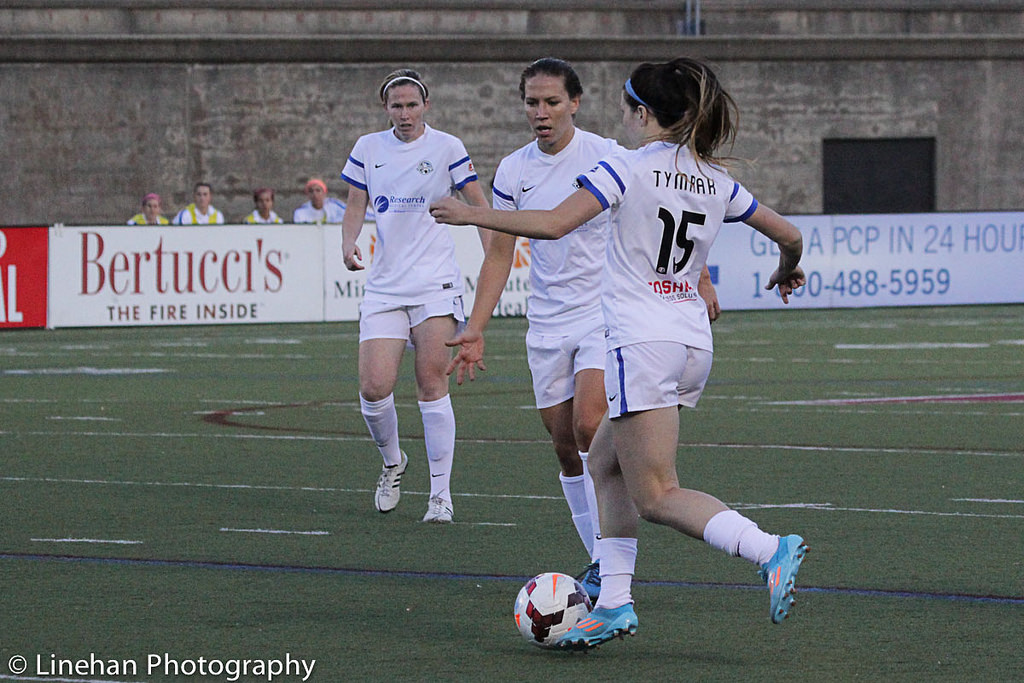 KANSAS CITY, Mo. — For the second straight year, FC Kansas City will host Portland Thorns FC in the opening round of the National Women’s Soccer League playoffs. And once again, these two teams will battle in extreme conditions for the chance to play in the NWSL Championship. While this year’s match looks set to be just as exciting as last, the teams have taken different paths to the postseason in 2014.

Too often in the league’s inaugural season, Vlatko Andonovski’s Kansas City squad gave up late goals, which cost the team points, playoff positioning, and ultimately their season. Since losing 3-2 in overtime of the 2013 NWSL semifinals, Andonovski has taken a business-first approach to the season. While his team has worked to once again secure the 2nd seed in the postseason, he has played multiple formations, several starting lineup variations, and rotated his players into different positions all over the field.

“Last year we experienced a lot of fatigue and tired heavy legs,” said Andonovski. “This year we’re trying to avoid that and at the same time we’re a little deeper and can rotate 17-18 players instead of 12-13 and I think that helped a lot as we get ready for the playoffs.”

The depth of the roster is key to the team’s success and extremely valuable in preparation for the playoffs, especially with U.S. women’s national team players Rodriguez, Lauren Holiday and Becky Sauerbrunn attending to international duty this week for Wednesday’s U.S. win over Switzerland, in North Carolina. Despite missing the 2013 MVP (Holiday), defender of the year (Sauerbrunn) and the league’s second-leading scorer (Rodriguez) for the week, Andonovski feels the team hasn’t missed a beat in training.

“We train the same way with or without them,” Andonovski said. “We have great leaders, you know, Leigh Ann Robinson, Jen Buczkowski, Nikki (Phillips) are players that stepped up and kept the level of training at a level that it’s supposed to be. They have been in this situation before, getting ready for the playoffs, and they know what it takes.”

Midfielder Erika Tymrak, feels better about this year’s playoffs with another season under her belt.

“Everything needs to be just that much sharper,” she said. “It’s towards the end, it’s easy to be burnt out but we have to make sure each pass is harder, have one less turnover than last week and we just focus on everybody bringing out the best in each other.”

Adding to the team’s confidence is the two-week break they received through at the end of the NWSL regular season schedule. They haven’t played a competitive match since August 9th, allowing the bumps and bruises that accumulate in the long NWSL season a short chance to heal.

To keep his team competitive, Andonovski gave the squad a few days off, but brought them back to a scrimmage against his other team, the MISL (indoor, now MASL) defending champion Missouri Comets.

“We had a chance to bring some of the professional men’s players from the Comets in and played an inter-squad scrimmage and it worked very well, Andonovski said. “Gave us a little different dynamics, a little different speed, a little more aggressiveness and I think the girls enjoyed it.”

Tymrak was thankful for the rest, but she is itching for a return to NWSL action.

“It’s good,” said the 2013 NWSL Rookie of the Year. “It gives a little time to refresh and we’re just excited to play a game. We haven’t played an actual game in two weeks…we played the guys which is obviously challenging but it helped us work on a lot of things we needed to. Going in, I think we’re excited more than anything”

While FC Kansas City is set to begin the postseason this week, Portland has essentially been in playoff mode for much of the past month. The Thorns needed a win in the final week of the season to secure their place in this week’s match.

Andonovski is mindful of the Thorns, despite their struggles at times. He is confident in his side, but understands the danger that his team faces.

“I think Portland has a stronger roster than last year,” he said. “You know looking at the names on their roster it would be silly to not be afraid of those names. When it comes down to it though…one game, 90 minutes in front of our own crowd; I think we’re capable of getting the win.”

While the Cascadia rivalry between the Thorns and the Reign has grown in significance with Seattle’s success this season, this matchup was the league’s original rivalry. Between the two teams, they boast 19 players who have represented their country at the highest levels. Portland has FIFA World Player of the Year Nadine Angerer in addition to a bevy of taking stars, while Kansas City features every NWSL 2013 award winner. Whether it is regular season or playoffs, these two teams pull out all the stops to beat each other.

Early indications are that Kansas City is close to selling out this match and will have the biggest crowd of the season on hand while ESPN broadcasts this game to a national audience. With temperatures expected to be over 95 degrees, both teams will be tested and fans are sure to be treated to another great match between the NWSL’s original rivals.

Thorns hope they’re peaking at right time as they head to Kansas City
Grainey: Coaches must take some responsibility for New Mexico hazing