The Lowdown: One down, one to go for Reign

Laura Harvey’s plethora of off season moves vaulted the Reign to the top of the NWSL table in 2014. (Photo Copyright Erica McCaulley for The Equalizer)

If you told Laura Harvey in January that her team would win the NWSL regular season comfortably and win 16 of their 24 games, she gladly would have taken it. But now that it has happened, she wants more.

“With the season that we’ve had and how it’s played, I think now it’s about trying to achieve that one last target,” she said.

The Reign will be heavily favored to beat the Washington Spirit in their NWSL semifinal match on Sunday night. If they win they will be favored again seven days later in the Championship match against either FC Kansas City or Portland Thorns FC. But before the playoffs begin, a brief look back on the regular season shows a side exceeded even the highest expectations and earned results from numerous matches when the odds were stacked against them.

The Reign were so good from so early, it can be difficult to remember how poor they were in 2013. They began with a decent allocation but started the 2013 season without any of their three U.S. players. Amy Rodriguez took the year off to have a baby, Hope Solo had surgery, and Megan Rapinoe had to finish the season at Lyon. Harvey countered by trading a 1st Round pick to Chicago for another allocated player, Keelin Winters. In the short run, that ranked as another blow for the Reign. In the long run it was a gem. Winters, playing as a non-allocated player in 2014, was brilliant playing alongside Jess Fishlock. That pair combined with Kim Little to form the best midfield in NWSL.

Beyond talent, and beyond the specter of their best performances, the 2014 Reign were more about the days they did not play their best than the days they did. On May 10 they took a 5-0-0 record into Providence Park and went toe-to-toe with the Thorns over 89 scoreless minutes. It looked as if the Thorns were gradually gaining control of the match until Little scored in the 90th minute to give the Reign a 1-0 win.

“That first Portland game probably gave us a platform to push on and become what we probably look like right now,” Harvey said. “And we needed things like that, we needed games where we were not necessarily the best team all game. Because last year we were the best team in some games and we never got the reward for that.”

Other matches stand out as well. The Reign played at Sky Blue in April, their first away match after three straight home wins. The match was played in a veritable monsoon. The Reign won 2-0. “We made sure that the weather was never an issue for us.”

And then there were the three games against Western New York Flash, who the Reign succeeded as Shield winners. At 80 minutes the Reign were behind twice and level once. All three times they flipped the result in the last 10 minutes, emerging from the season series with two wins and a draw.

“Every game we played against the Flash this year has been the same,” Harvey said. “Last year that probably would have been a defeat whereas this year we managed to turn it around into a victory late or snatch that last-gasp equalizer (May 25) to keep that unbeaten run going at the time.” 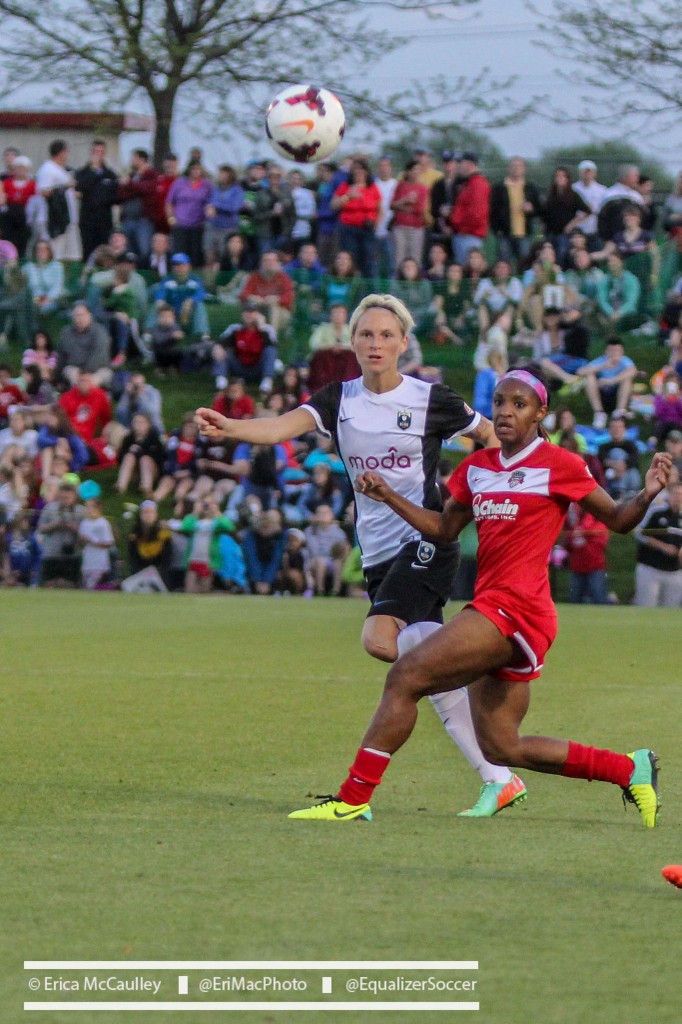 Jess Fishlock and Crystal Dunn are set to square off again in the NWSL semifinals on Sunday. (Photo Copyright Erica McCaulley for The Equalizer)

Harvey said that nothing about her team this season surprised her, but added that she was most pleased with how difficult it was to break down the defense. It was a theme she spoke about during preseason after the Reign went through all of 2013 without a clean sheet. “Everyone will talk about our attacking talent. That’s definitely enabled us to score a lot of goals. But making sure that we were hard to beat is something that we focused on in preseason this year. I think that was a crucial element in us being able to have that mentality through all the games.”

Indeed the Reign shutout the Breakers on opening day and never looked back. They were 2-0-1 when allowing two goals. They never allowed three.

The final weekend of the season was wrought with playoff drama. The Reign were involved insomuch as they lost to the Thorns where a win or draw would have knocked their Pacific Northwest rivals out. But there was little drama to the Reign season in terms of staying in first place. They won their first seven, and made it through 16 without losing before finally being cut down by the Red Stars. A hotly anticipated visit to 2nd-place Kansas City on August 2 was somewhat anticlimactic after the Reign clinched the Shield three days prior.

It seems routine now, but one of the big stories early in the season was how quickly the Reign gelled after bringing in so many new faces and having minimal preseason sessions with the entire team in tow. “We knew we had a good side. We felt it might take time. I think that was the biggest things we exceeded on. We hit the ground running really quickly and put points on the board early, which took the pressure off us a little bit. It was nice to be able to get the regular season and top finish sorted nice and quickly and then we can go from there.

“It definitely exceeded expectations, but it wasn’t hugely surprising. We felt we had a real chance of doing well because of the players that we had.”

Now it is on to the playoffs, where the Reign will try and do what last year’s Flash could not—win twice at home to make it a double. Harvey said the season is already a success, but the clear goal looking ahead is to finish the job and be league champions.

“I don’t think we can ever look back on this season as a failure,” she said, “but I think we would be definitely disappointed if we didn’t go on and get to that next stage.”

Note: we will post a full analysis for the season after Sky Blue’s final home match on Wednesday night

Here are a few soccer-related takeaways from Week 19:

— The Thorns-Reign match was loaded with interesting nuggets. Among them, Nadine Angerer authored a stunning and timely return to form. Angerer’s stout play in the 1st half kept the Thorns in the match until Alex Morgan’s 68th minute match-winner. The Thorns also looked more comfortable defending their lead than at any point this season.

— The Flash’s 3-3 draw in Chicago was a microcosm of their season. They looked spectacular for stretches, as if they and not the Red Stars should have been playing for a playoff berth (the draw put the Red Stars on the ledge; they fell off a day later when the Thorns won.) At others they looked every bit the team that lost four more times than they won. Check out the defending on the Christen Press goal in the 60th minute. Multiple players gave up on the play and thus no one was back for a potential clearance off the line after debutante keeper DiDi Haracic did her part to hold off Press.

— It was quite an admission from Mark Parsons when he said the occasion got to the Spirit Saturday in a 1-0 loss to Sky Blue FC. Three days earlier they gave up a late lead in Seattle meaning they failed to convert on two matches that would have put them in the playoffs. Less than two hours after the final whistle they were in thanks for the Red Stars dropping points to the Flash. They’ll have to make sure nothing gets to them in Seattle where it will likely take the best Spirit performance of the season to push through to the final.

— The playoff matches are: Portland at Kansas City (Saturday, 1pm EDT); and Washington at Seattle (Sunday, 11pm EDT). That’s a bad break for Spirit fans, especially if there is extra time that will push the finish past 1:30 local time. Both matches will be broadcast live on ESPN2.

— The regular season wraps up with Wednesday’s makeup in New Jersey and there could be some odd dynamics between Sky Blue and the Dash. For starters, Sky Blue’s Christie Rampone and Nadia Nadim are on national team duty. So is Meghan Klingenberg for the Dash. And Becky Edwards has already left to start her loan deal in Sweden. But odder still is the teams are basically playing for the No. 1 pick (barring changes via expansion) since the Dash are currently in last and a win would leave the Breakers in last, giving Sky Blue the top pick thanks to a preseason trade.

— The makeup will cost Edwards a chance to play every minute of the season for the Dash. She started the team’s first 23 match and played all 2,070 minutes. Not bad for a hard-working midfielder who had ACL surgery last summer.

— Edwards’s absence Wednesday means Brittany Taylor is the only player in the league to be on the field for all 2,160 minutes. Alyssa Naeher also played every minute for the Breakers but topped out at 2,115 thanks to the weather-shortened match in Kansas City.

— Laura Harvey expects Fishlock to return to Seattle immediately following Wales’ World Cup Qualifier against England on Thursday. The Spirit’s Jodie Taylor is on the England roster for that match.

— It took an injury, but Alyssa Naeher is in national team camp for Wednesday’s friendly against Switzerland. Naeher replaced Ashlyn Harris who has been battling concussion symptoms. With much attention on Hope Solo’s chance to stand alone as the U.S. leader in shutouts, it looks as if U.S. coach Jill Ellis has her sights set on getting 90 minutes from Solo.

— Harris’s status for Sunday’s semifinal is up in the air.

— Likewise the Thorns have not made any statements about the status of Nikki Marshall, who was on cruches with her knee wrapped late Sunday after going down and being stretchered off early in Sunday’s playoff clinching win over the Thorns.

— If the Red Stars had found the ability to bunch goals together before their last three games, they would probably be getting ready for the playoffs instead of cleaning out for the long offseason.

— Expect Sky Blue to make a big bid to bring Nadia Nadim back in 2015.