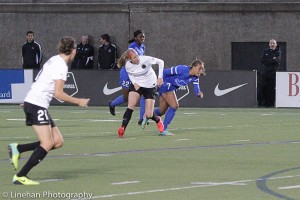 Nikki Marshall (center) has been diagnosed with a torn right ACL. (Photo Copyright Clark Linehan for The Equalizer)

Portland Thorns FC defender Nikki Marshall has been diagnosed with a torn right a torn anterior cruciate ligament (ACL) and will undergo surgery.

Marshall went down on a non-contact injury early in Portland’s 1-0 win over Seattle Reign FC on Sunday, a victory that clinched Portland a place in the playoffs. An MRI reveled the tear in Marshall’s knee, as first reported by the Oregonian’s Jamie Goldberg.

Marshall has started all 46 matches in Thorns history thus far, but will miss Saturday’s NWSL semifinal against Kansas City and the foreseeable future.

“We miss Nikki,” Thorns coach Paul Riley said Wednesday. “The incentive now is for Nikki as well as us. She’s part of us and she’s going through surgery. I think I speak for the whole team that, our hats [are[ off to her and our prayers are with her; we hope everything goes well.

“We will miss her for sure. She’s super athletic. She brings a kind of passion to the locker room, and you talk about ‘give everything,’ everybody else coming in now, a lot of the other players — she’s been there every game and she has taken some heat, and that went away and she’s still there.”

Riley added that the Thorns will most miss Marshall’s athleticism and her role as an “emotional leader.”