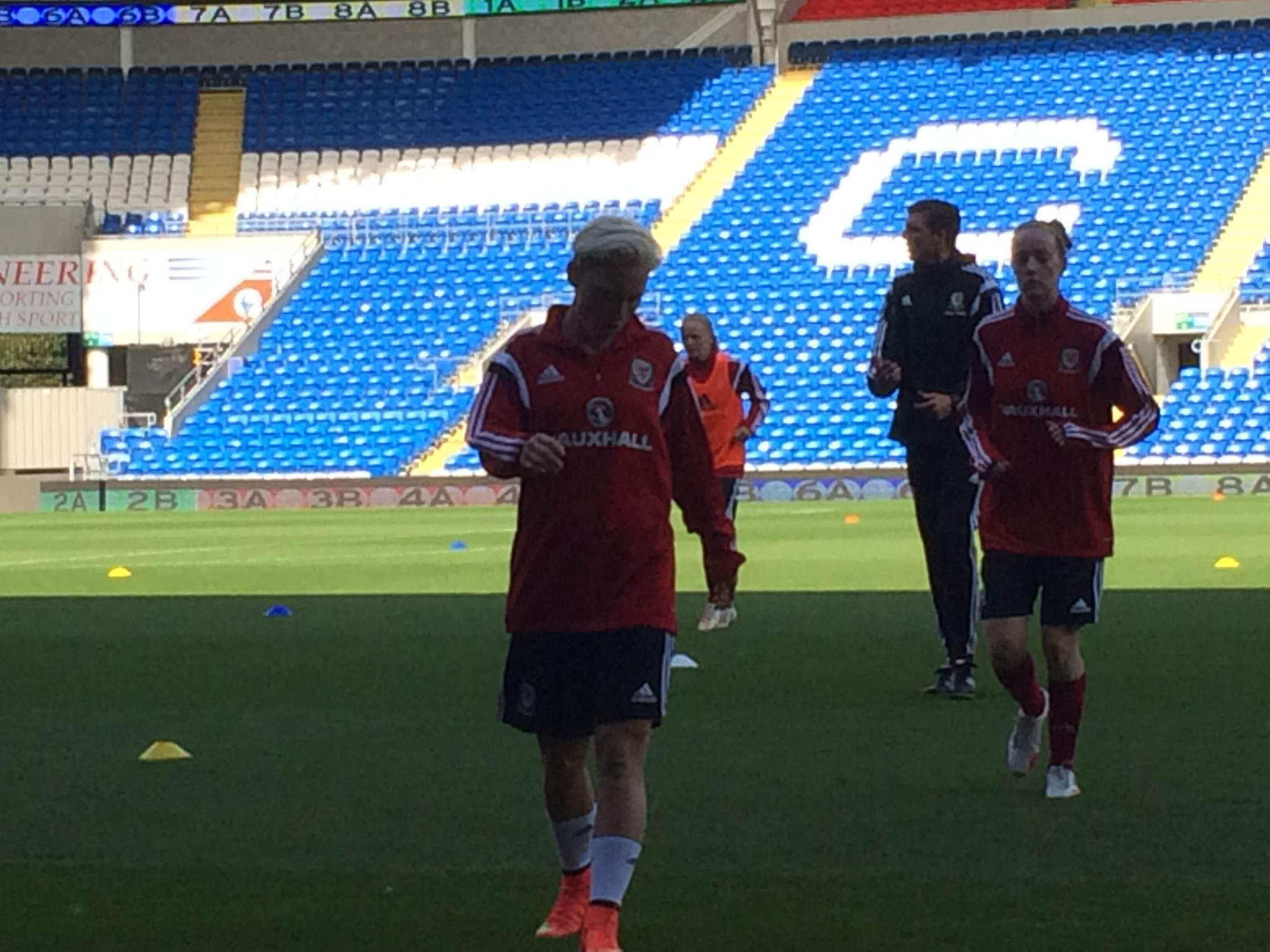 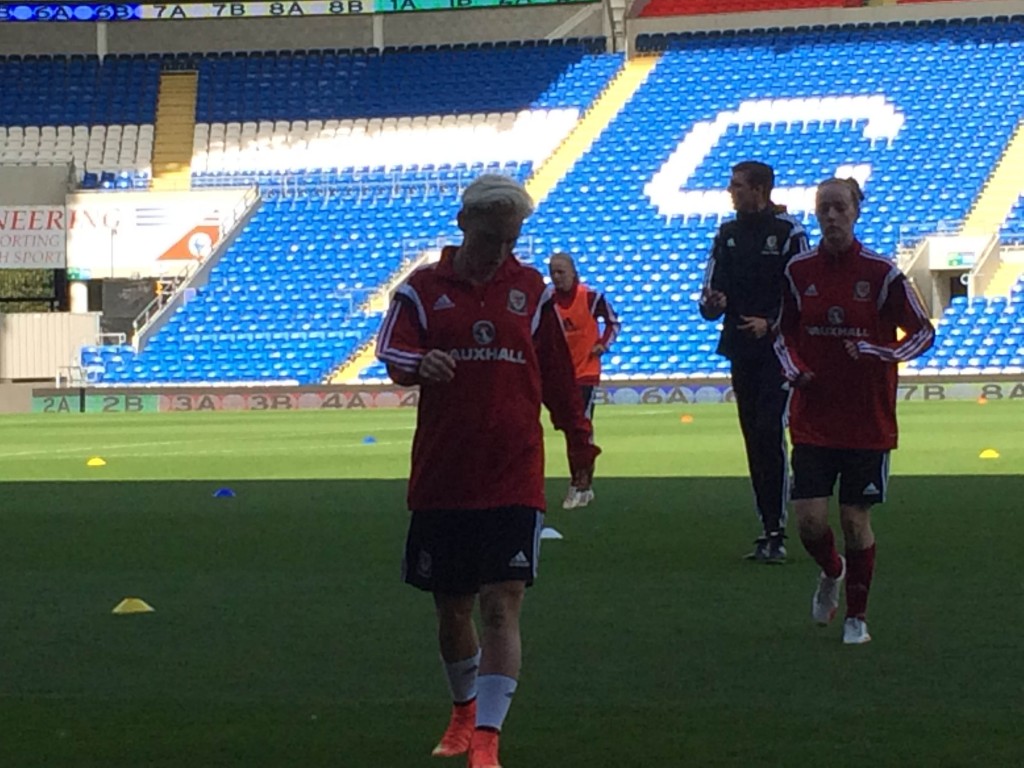 Jess Fishlock and Wales hope to pull an upset vs. England on Thursday, but they are being realistic. (Photo Copyright Harjeet Johal for The Equalizer)

CARDIFF, WALES — UEFA qualification for the 2015 World Cup in Canada resumes this week with a crucial fixture taking place at Cardiff City Stadium on Thursday evening. Wales will host England in Group 6 action, with the visitors needing only one point from two remaining matches to secure a spot at next year’s competition.

Wales sit second in the group with 19 points from eight matches and they’ve come to the realization that focusing on earning one of the four playoff spots is a more likely route that could possibly lead them to qualification.

Wales captain and Seattle Reign FC midfielder Jess Fishlock is hoping to lead her team to a positive result that will help them improve their chances of becoming one of the best second-placed teams in UEFA World Cup qualification for Canada. Fishlock would still like to earn all three points, but she is realistically looking at the bigger picture for Wales.

”I think they (England) need a draw between us an Montenegro to go through, so I think that we can safely say that first place is gone,” Fishlock said. “For us I think it is for second place and it is the playoff. We’re going into this game knowing that perhaps if we get a result, and if we get one point, that will really make our playoff chances huge. That’s what we’re looking to do. We don’t need to go out and win, that’s not what we need to do. It’d be great if we did, but it’s not necessary. We have to be very humble when it comes to that. We don’t want to go out there and throw everything away in the first 20 minutes. We want to be in a good position to get the point that we need and a good result.”

Fishlock has been a critical player for Seattle this season in the NWSL, but she is more important and crucial to the success of her national team. The 27-year-old has scored one-third of the 18 goals that Wales have scored in qualification. Not to be outdone, her teammate, Natasha Harding, has scored five goals for Wales. Both players will be an integral part of the offensive game plan for Wales Manager Jarmo Matikainen.

The 54-year-old Finnish gaffer is not jumping ahead to what could unfold if his side don’t get a result against England. Instead he has adopted a one-game-at-a-time approach. If Wales don’t get a result they would face almost a must-win situation in their final qualification match on September 17 in hostile Ukraine.

“We can play only one game at a time and that’s the thing that we have to focus on tomorrow and not think about the points,” Matikainen said. “If we perform and if we play well usually the results will look after themselves. We go towards that game (England) with a positive mindset and everything we can get from the game is going to be a bonus.”

England will have a different mindset as they only require one out of a possible six points to head to Canada. Despite this match not being a must win situation the players aren’t taking Wales lightly as they would like to quality for Canada with maximum points. England and Arsenal Ladies right back Alex Scott is excited about playing in the Welsh capital and she’s quite looking forward to what will unfold on the pitch come Thursday.

In their earlier group stage meeting in London on Oct. 26, 2013, Wales held England scoreless during the opening 45 minutes before falling 2-0 thanks to second half goals from Jordan Nobbs and Toni Duggan. England have only conceded one goal in qualification and have a goal differential of plus-37. According to Scott, the Lionesses aren’t planning to take Wales lightly once kickoff arrives. 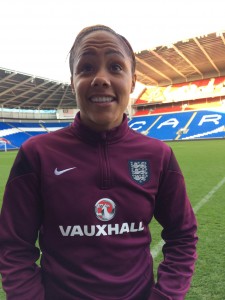 “We are going into this game like it’s a cup final or a World Cup final. We know we want to come out here and get three points so it’s never about underestimating the other team.”

England manager Mark Sampson is not taking Wales lightly and he expects his team to put forth a big performance.

“It’s obviously going to be an important game for us, it’s a World Cup qualifier,” he said. “We’re in a position where we only need one more point to qualify so we want to come here, put on a big performance and get that result that will allow us to qualify for the World Cup. We’re treating Wales not lightly and we’re treating them just as we treated the Swedish team. We’ve got to be at our best to get the result that we want. That’s our focus, to come here, be at our best and as close to our best as we can be.”

Since being named manager of England on Dec. 6, 2013, Sampson has put his stamp on the team and they look completely rejuvenated, and different from the team that crashed out at the 2013 European Championships in Sweden. The Wales-born manager has provided an enthusiastic, positive, and relaxed but focused atmosphere that was much-needed after the departure of previous manager Hope Powell. Sampson is pleased with how things have gone in such a short time since his promotion to England manager.

“In terms of the team development we are really pleased with where we are taking the team,” he said. “We feel there is a really good energy, and a really good vibe around the group at the moment, it’s a fun place to be and when it’s a fun place to be and learning is taking place, talented people only thrive. We’ve got those type of things involved in our environment and the players are enjoying it. You can see on the pitch that the players have smiles on their faces. They’re playing with a huge work ethic and when that’s the case as a group you give yourself a chance to win a football matches. We can’t get carried away, we want to make sure we get to the tournament in Canada and when we do get there we’re going to be in a place to be competitive with every single team there.”

Following the match, the England players will go back to England to compete in the FAWSL on the weekend. The player with the longest travel schedule is of course Fishlock. She will embark on a massive flight path that will take her to Seattle, Wash., for the Reign’s playoff match against the Washington Spirit on Sunday night. This is not something new for her as she has often had to travel back and forth between her national and club teams. Fishlock is used to the long travel and she is hoping to have plenty of snacks that will boost her energy for her time in the air.

“I think I’ll find away, whether it’s a lot of sugar or a song,” she said. “I think I have 36 hours to refuel my body. I’ve done it enough to understand what I need to do and how I need to do it.”

Matikainen isn’t concerned about Fishlock’s tremendous travel schedule and he is certain that his captain will give everything she can as she looks to test herself against England when he calls her number.

“Jess has been an outstanding leader on and off the pitch and obviously she’s cherishing that possibility to test herself and leading the team against one of the top teams in the world. I’m sure she will be ready,” Matikainen said.

When and if either Wales or England qualify for the 2015 FIFA Women’s World Cup, they will have to play on artificial turf. While players from many footballing nations have been quite vocal against the impending turf that’s something that each player, coach and team will have to adjust to should they make it to Canada.

Fishlock has heard plenty about the turf tug of war and she doesn’t agree with the standards and playing surface that the tournament will be played on.

Matikainen wasn’t willing to discuss his overall thoughts on the tournament or what could lie ahead if Wales qualify, but he did offer up this familiar stance that should become the norm for managers who want to adapt and get more comfortable with playing on artificial turf.

“If the games are going to be played on artificial turf it’s going to be the same for all the teams and every team has time to prepare for them.”

Sampson recently returned from Canada, where he watched the England U-20 team compete in the 2014 FIFA U-20 World Cup. Besides getting accustom to the long travel time and vast land size of Canada, Sampson enjoyed his time in the host country for next year’s women’s football crown jewel competition. He does not see turf as an obstacle or problem to the overall success for his team should they end up in Canada.

“We’ve got to play the cards we’ve been dealt. If the tournament is going to be played on 4G (turf) then we’ll be ready to play on 4G (turf), but from us you’ll just get a team that will be there, fully prepared and ready to face any circumstance that we face,” he said.

Alex Scott is taking life in one easy stride and she isn’t bothered by the turf debate that has made waves in North America. For Scott she is just happy, and thankful to still be alive and playing the game she loves after her car was completely totaled in a motorway crash in July.

“I’m in a good place, I think it’s opened up my eyes to life and I’m just enjoying every moment of it,” Scott said. “After surviving that and knowing that they told me that I shouldn’t have walked out alive, I’m just living each day and I’m excited and I’m glad I’m still here.”

The former WPS and Boston Breakers player is certainly aware of the turf drama, but she is not focused on this situation which is out of her hands. Canada Soccer and FIFA are the ones making the tough decisions and Scott would prefer to leave those decisions to the people in charge.

“I think it’s a hard one to comment on. Obviously it’s in FIFA’s hands and they’ll do what they feel is necessary. I think for us as players we just need to focus on getting there first and then worry about them situations after. I was in Boston for three years so I played on turf then. If you’re asking me: Do I prefer it? No. Can I deal with it? yes.”

Of note for Thursday’s match, all-time England scorer Kelly Smith will miss this match due to a leg injury.