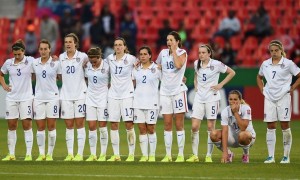 The U.S. women have a long way to go in technical development. (Getty Images)

It’s a phrase Tony DiCicco, now a commentator for ESPN, has used often throughout this FIFA 2014 U-20 Women’s World Cup. To win the increasingly competitive tournament, it’s about not only creating those flashes of brilliance, but sustaining them.

As the United States U-20 women wake up on Sunday, they know their tournament is over after losing, 3-1 on penalty kicks to Korea DPR on Saturday. And looking back, it’s hard to find many of those ‘championship moments’ from the U.S., to quote DiCicco (who knows plenty about them, guiding the U-20s to a World Cup title in 2008, and the senior team to its last, famous World Cup win in 1999).

They were there in the final group stage match against China, when a 15-pass buildup led to Lindsey Horan’s opening goal, and then the third goal was the result of a precise, 16-second counterattack.

That form spilled over into Saturday’s opening moments for the U.S. against the North Koreans. Makenzy Doniak scored in the 6th minute on a goal that looked nearly identical to Tuesday’s opener: a patient build-up that developed down the right flank before a low cross found the goal-scorer.

But after that, there was much left to be desired. North Korea dominated meaningful possession throughout the second half and extra time, as the Americans could frequently only clear their lines and prepare for another attack.

There was technical inferiority that stood out like a sore thumb on Saturday, and it wasn’t because of the slick, wet grass in Toronto. Korea DPR played on that same surface and moved the ball with ease as the Americans scrambled defensively and failed to piece together passes.

Penalty kicks were even somewhat fortunate for the U.S., but they were only a continuation of the struggles as Kim Chol-Ok saved the three very tame attempts.

Most interestingly, the U.S. was often out-hustled and fought off the ball by Korea DPR. Physicality, fitness – for better or worse, those are American trademarks.

Nigeria handed the U.S. U-20s the same fate in the 2010 U-20 World Cup – a quarterfinal exit on penalty kicks. Jill Ellis, now the senior team manager, coached the team then.

So is the U-20 World Cup triumph from 2012 an anomaly? It remains to be seen. Part of this year’s struggles includes finishing second in a group that had no business being assembled the way it was in the draw. Germany, Brazil and China joined the U.S. in that Group of Death.

There were bright spots in the tournament: Lindsey Horan scoring three goals, Rose Lavelle creating in the midfield, and 16-year-old Mallory Pugh getting significant time in what could be her first of three appearances in this tournament.

Saturday, however, offered little evidence that the Americans would have been any better off on the other side of the bracket against Canada, which played well and had its chances before eventually losing to Germany, 2-0.

What’s clear is that the Americans – at all ages – must figure out a way to win in these sort of scenarios as the rest of the world continues to improve, especially at the youth level. And what’s even more obvious is that said solution is not the tradition, physical, determined American way, but one that includes further tactical and technical development.