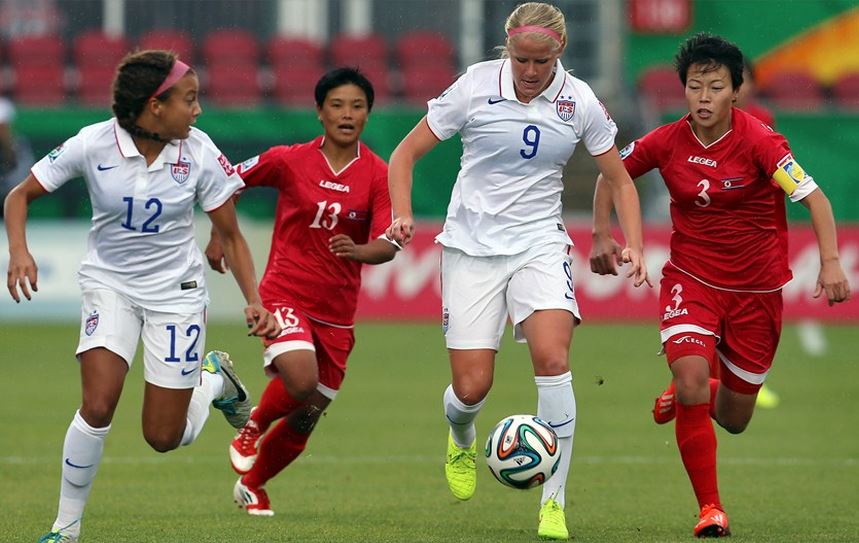 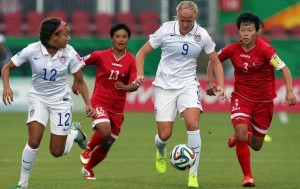 North Korea eliminated the United States in the quarterfinals of the 2014 U-20 Women’s World Cup. (Getty Images)

The United States will not repeat as U-20 Women’s World Cup champions after losing to Korea DPR, 3-1 in penalty kicks on Saturday in the quarterfinals in Toronto after a 1-1 draw through extra time.

Kim Chol Ok saved the first three American penalties in the shootout as Jon, Choe Yun Gyong and Ri Kyong Hyang converted to provide the support. Savannah Jordan, Lindsey Horan and Rose Lavelle were all denied by Kim on weak efforts from the spot.

North Korea dominated much of the match, but could only create an equalizer from the penalty spot in the 54th minute. Jon So Yon finished the PK, leveling the match after Makenzy Doniak put the Americans ahead in the 6th minute.

Doniak opened the scoring after the U.S. built possession down the right flank, similar to the buildup to the Americans’ first goal on Tuesday vs. China. Mallory Pugh turned on her defender and sent a low cross toward Doniak, who eventually collected the ball after a deflection following her initial shot.

Jon nearly equalized for North Korea the 18th minute, skipping her free kick off the top of the cross bar. Eight minutes later, it was Ri Un Sim who put her shot just over the crossbar in a 1-v-1 with U.S. goalkeeper Katelyn Rowland.

Korea DPR dominated much of the second half from there as the United States struggled to piece together more than two passes in a row on the slick Toronto pitch. The United States’ best chance after halftime came in the 83rd minute, when Horan collected the rebound of her own free kick and just missed the upper corner of the net.

The United States won the 2012 U-20 Women’s World Cup, beating Korea DPR in extra time in the quarterfinals. Korea DPR has won the competition once previously, in 2006. Next up for the North Koreans will be the winner of Sunday’s Nigeria-New Zealand match.