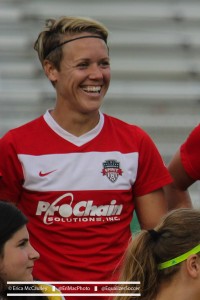 Lori Lindsey will retire at the end of 2014. (Photo Copyright Erica McCaulley for The Equalizer)

Washington Spirit midfielder Lori Lindsey has announced she will retire at the end of the year.

Her NWSL team, the Washington Spirit, is in position to make the NWSL playoffs heading into the final weekend of the regular season. Lindsey will play out the final months of her career in Australia, for Canberra United.

Lindsey played for the United States national team 31 times, scoring once and appearing in the 2011 World Cup. She played in the Washington, D.C. market for the Freedom and the Spirit in four different leagues. Her professional career began in 2002 with the WUSA’s San Diego Spirit, and a year later she made her way to the nation’s capital the final season of the first women’s professional league in the U.S.

From there, Lindsey stayed with the Freedom through its W-League years and its first season in WPS, before making her way to Philadelphia for two season. She has played the first two NWSL seasons for the Washington Spirit.

Lindsey announced her retirement in an open letter, an idea inspired by the one Michael Jordan wrote. Speaking about soccer, Lindsey wrote:

The W-League season begins in mid-September and ends on Dec. 21, with the grand final.

Washington ends its regular season at home on Saturday against Sky Blue FC at 6:30 p.m. ET.