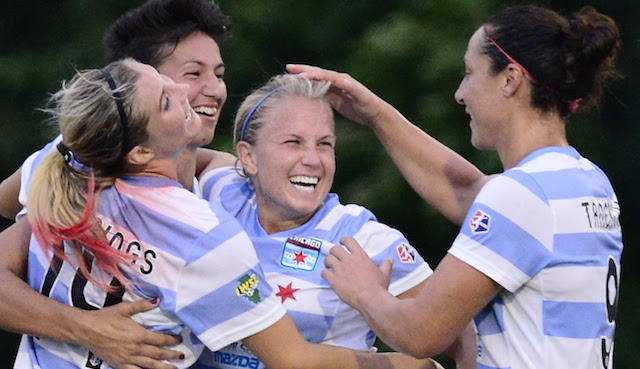 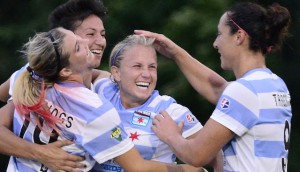 Lisle, Ill. – A couple of set pieces led the way for the Chicago Red Stars, keeping their playoff push going with a 2-0 win over the Boston Breakers on Wednesday at Benedictine Sports Complex. Alyssa Mautz and Melissa Tancredi each scored, while Red Stars goalkeeper Karina Leblanc had her fifth clean sheet of the season.

“We have a little bit of box organization so we have people cover spots,” said Chicago Red Stars coach Rory Dames after the match. “We haven’t scored on corners in a long time. It’s nice to see them score on the corners. They do have set runs and it’s nice to see them so disciplined.”

The Red Stars with the victory have moved into a playoff position in the fourth spot at 9-7-7 (34 pts.) with one game remaining, in which they host the Western New York Flash on Saturday. Western New York was eliminated from the playoff race with a 3-2 loss to Sky Blue FC on Wednesday.

As it stands, Washington (10-8-5, 35 pts.) sits in third place with a match left Saturday at home against Sky Blue FC (7-8-7, 28 pts.). Portland Thorns FC (9-8-6, 33 pts.) has one game left hosting league-leading Seattle on Sunday. Sky Blue FC is in the sixth spot and has one other match to make up at Houston Dash if needed, which was a postponed match last month.

“We just need to play the last game and get the three points,” Dames said. “We set a goal to get nine points over the last three games and that’s all we’re interested in doing. The other games and the other results are what they are.”

Boston (5-16-2, 17 points) had its first good look in the 11th minute of play, when Julie King kicked a low, lined ball through traffic. LeBlanc made the one-hop save at the back post.

A minute later, Red Stars forward Christen Press sent a cross from the right side of the box towards the far post, wher Lori Chalupny hit a shot from close range, which Breakers keeper Alyssa Naeher saved with a two-handed parry.

Chicago nearly had the opening goal in the 15th minute, when Melissa Tancredi fired a shot from 18 yards off the crossbar and in front of the goal line. Press followed it up on the rebound on a header back to Naeher.

Boston’s Lianne Sanderson found an opening for a shot at the top of the box in the 25th minute, but she sent it up and over the bar.

Press forced the issue with a move to the right outside the box, made a move and fired a shot that Naeher made a one-handed push over the bar in the 29th minute. Then on the Red Stars corner kick, Vanessa DiBernardo sent the ball into the box, Jackie Santacaterina touched it with a headball to the near post. Julie Johnston head-flicked it back across the goal, where Mautz finished it with a header of her own for a 1-0 Chicago lead.

“I was just sitting by the back post for the redirect,” Mautz said. “It’s something that we do work on in practice.”

In the second half, off a DiBernardo corner kick in the 50th minute, Chalupny drilled a 40-yard shot that was saved by Naeher. DiBernardo was there on the rebound but put it wide of the post. Then, in the 62nd minute, Taryn Hemmings made a couple of moves and let go a shot up top, but once again Naeher made a diving stop.

Two minutes later, Chicago cleared out a corner kick, but Bianca D’Agostino drilled a 35-yard shot at the near post for Boston. Red Stars’ keeper LeBlanc made a leaping stop to her right. Then, on the counter attack, DiBernardo kicked a low 15-yard shot past the far post in the 65th minute.

In trying to tie, Boston’s reserve Courtney Jones hit a short-range shot near-post that LeBlanc pushed over the end line in the 71st minute.

The Red Stars found their second goal off another corner kick. DiBernardo sent the ball into the box, Santacaterina touched it to Abby Erceg, who got a shot on goal. Naeher made the save, but Tancredi scored on the rebound for the 2-0 lead in 82nd minute.

“For the moments that we were playing well, we didn’t get anything out of it,” Boston Breakers head coach Tom Durkin said. “I can’t fault my girls; they had a lot of pride. We’ve had eight one-goal games. I don’t think the score was any indication of the game we played. It’s not an easy field to navigate, it’s a busy field out there. But give credit to Chicago, their defense was at their best.”

If Chicago wins its regular season finale on Saturday at home against the Western New York Flash — eliminated from contention with Wednesday’s 3-2 loss to Sky Blue FC — then the Red Stars will clinch a playoff berth.

Chicago can still qualify for the playoffs with a loss against the Flash on Saturday, combined with a Thorns loss (or draw, if Chicago maintains superior goal difference) on Sunday and a Sky Blue draw or loss on Saturday. If Chicago loses, Portland draws and Sky Blue wins, Sky Blue would then need to make up a postponed match with Houston July 2nd.

The NWSL table heading into the final weekend: