The Lowdown: Wild final week ahead in NWSL 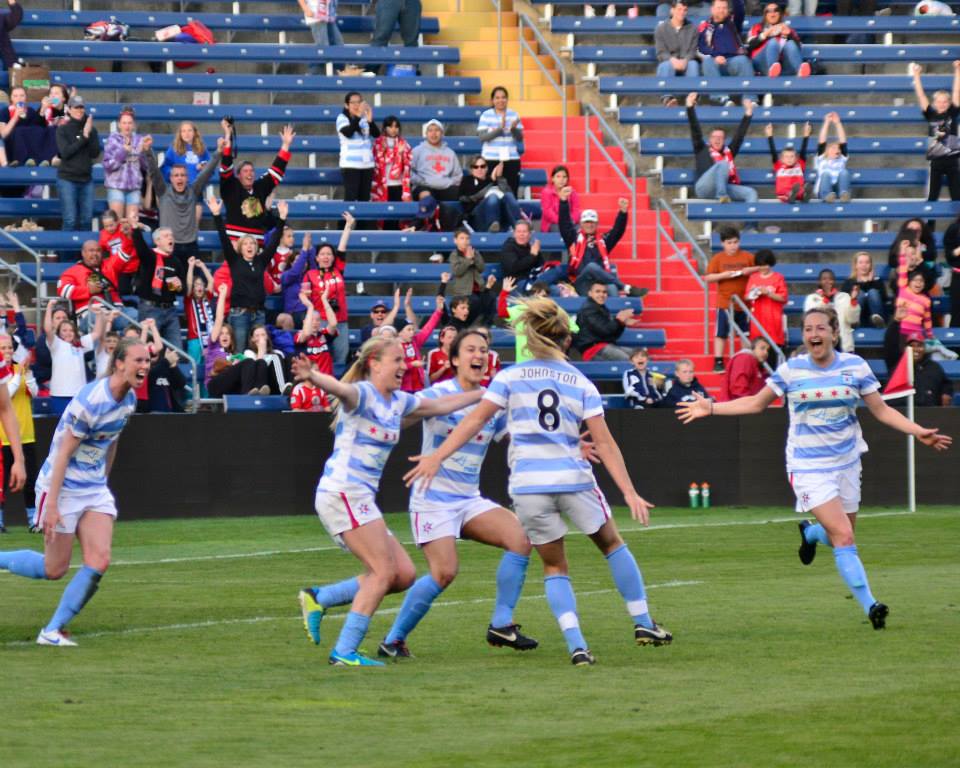 The Chicago Red Stars are one of five teams fighting for the final two playoff spots. (Photo Copyright Clark Linehan for The Equalizer)

Week 18 was a wild one in the NWSL, setting up what could be an equally wild finale to the league’s second regular season. There were several clinching and elimination scenarios last week, but the only one that came to pass was FC Kansas City securing 2nd place and the right to host a semifinal.

No one was eliminated and so seven of the nine teams remain alive heading to the final week. Wednesday’s Flash-Sky Blue match is effectively a playoff game, but instead of extra time, a draw knocks out both teams. If Sky Blue win they live to the weekend while the Flash need a win and a Red Stars loss to remain in with a chance. Here is where each team stands heading to Week 19.

The Reign fell behind yet again Saturday night, but even in a match with nothing to play for they stormed back and pulled out a 1-1 draw to finish the regular season undefeated at Memorial Stadium. The draw also prevented the Spirit from wrapping up a playoff berth. A remarkable regular season concludes Sunday in Portland where the possibility exists the Reign could knock the Thorns out of the playoffs. A win also gives the Reign the best points-per-game number in the eight seasons of women’s professional soccer (2011 Flash, .778; Reign win would give them .791). They’ll host the semifinal match August 24 at 11pm EDT.

The Blues came down the stretch 2-3-2 and get the Week 19 bye before hosting their semifinal on August 23 at 1 p.m. EDT. The game that clinched 2nd was one to remember. They beat the Breakers 2-1 in a match that was delayed two hours and then delayed again at halftime, never to be resumed. League rules call for a match to be official after 45 minutes and so it was a win for FC Kansas City and 2nd place. After that they lost to the Red Stars. Last year they stumbled to the finish and then blew a 2-0 lead to the Thorns in the playoffs. Again it looks like they left their best form in July so they’ll have to make the most of their two weeks heading to this year’s playoffs.

This is where things get interesting. The Spirit were minutes from the playoffs when three defenders let Kim Little get into the box, where she scored an 89th minute equalizer that kept the playoff clinching at bay. They will finish Saturday at home against Sky Blue, who has given them fits this season. A win gets them in the playoffs—but they might not need it. If the Red Stars lose or draw Wednesday then the Spirit are in. A win also assures them 3rd place and a trip to Kansas City. So does a Thorns draw or loss against the Reign and anything but two wins for the Red Stars. The only way the Spirit won’t make it is if they lose to Sky Blue and the Red Stars and Thorns both win all available matches. A draw acts the same as a loss.

Saturday’s 2-1 win over Kansas City—the first time since May 28 the Red Stars scored multiple goals in a win—got things on track in the nick of time. When the Thorns lost in Boston a day later it set up the Red Stars to control their own path to the playoffs. It won’t be easy as they will have to win twice more this week—Wednesday against the Breakers and Saturday against the Flash. They can get in without winning both games but will need help. A win and draw are good enough if the Thorns don’t beat the Reign. A win and a loss or two draws will be enough if the Thorns lose. And a win and loss plus a Thorns draw will also work providing the Red Stars come out even or better on aggregate goals over their two matches.

It’s not over for the ousted Shield winners and last year’s runner-ups. Yet. Their path is straightforward, if not simple. First, they must beat Sky Blue at home and then the Red Stars on the road. They also need the Breakers to at least hold the Red Stars to a draw on Wednesday and for the Thorns to lose on Sunday. It’s not likely, but it’s not impossible.

The Nadia Nadim phenomenon continued Saturday with a hat trick in Houston that kept Sky Blue mathematically alive. They’ll have to beat the Flash midweek and the Spirit on the weekend. They will also need the Thorns to do no better than draw and for the Red Stars to gain less than three points, or for the Red Stars to get three points and the Thorns to draw–but not lose. But all that does for is a rescheduling of the postponed game against the Dash. That would likely be August 20. If everything already mentioned happens and Sky Blue also wins the makeup match, they go to the playoffs.

The Dash are eliminated from contention and finish the season in Boston in what will be a meaningless finale in terms of the playoff race. A loss will mean the Dash finish last unless they have to play the makeup against Sky Blue and get points out of it.

The Breakers played spoiler by beating the Thorns and throwing them into havoc. Now they can do the same to the Red Stars who pounded them twice in the spring. A poor finish does them no good since Sky Blue owns their highest pick in the 2015 draft.

Here are a few soccer-related takeaways from Week 18:

— Chantel Jones held up fairly well for the Spirit on Saturday, and her goal allowed can be pinned more on her defense and Kim Little than goalkeeper error. The Spirit have not said whether Ashlyn Harris will be ready for the weekend or if Jones will get another start.

— Nadia Nadim continues to be a find for Sky Blue. Saturday she became the first player in club history to score a hat trick as the team kept hope alive for a miracle run to the playoffs. Bringing back Nadim in 2015 will be a big step towards a return to the playoffs.

— Last week here it was suggested that Alyssa Naeher could be the Goalkeeper of the Year. Sunday’s performance against the Thorns only added to that possibility.

— Three players have played every minute this season, but among them only Brittany Taylor (Flash) is in line for a complete season of 2,160 minutes. The other field player in Becky Edwards (Dash), but barring a rescheduling of the postponed match with Sky Blue, Edwards will be capped at 2,070. The keeper is Alyssa Naeher, who lost 45 minutes when the Breakers match in Kansas City was cut short by rain. The Breakers will play 2,115 minutes this season.

— That Edwards has played every minute is remarkable considering she had ACL surgery last summer.

— With nine teams someone was always going to have to sit out the last weekend. But as NWSL strives to gain better scheduling integrity it would be nice in these situations if the stray team at least played midweek.

— Kim Little has effectively locked up the Golden Boot with 16 goals. Jess McDonald and Jodie Taylor have 11 and would need historic performances this weekend to tie Little. Amy Rodriguez is second with 13 but FC Kansas City’s regular season is over.

— Taylor’s availability for this weekend is unknown after she was called in for England ahead of next week’s World Cup qualifier against Wales. The game could have Spirit fans rooting for a 4th-place finish which would give Taylor an extra 34 hours to recover and travel back for a playoff game.

— This is the second year in a row a weather-shortened game has held high importance. Last season the Red Stars were officially eliminated when rain and curfew cut short a 1-0 loss in Washington after 81 minutes. This time FC Kansas City’s 45-minute win over the Breakers clinched them a home playoff date.

Ellis names USWNT roster for match vs. Swiss
US, Germany advance to quarterfinals with wins