Fishlock signs with Frankfurt, back to Seattle in ’15 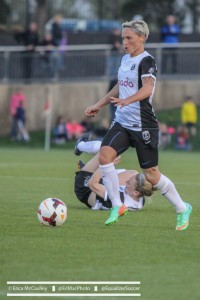 Jess Fishlock is headed to Germany. (Photo Copyright Erica McCaulley for The Equalizer)

Seattle Reign FC and Wales midfielder Jessica Fishlock has signed with Frauen-Bundesliga side 1. FFC Frankfurt. Seattle says Fishlock will return prior to the start of the 2015 NWSL season.

“I am very happy to play the 2014/15 season for 1. FFC Frankfurt,” Fishlock said. “It is a club with a high reputation and a long tradition. I feel honored to embark on this challenge and hope I can contribute to a successful season.”

Fishlock has four goals and seven assists in 22 games this season for Seattle, which clinched the NWSL regular season title. She will join Frankfurt at the conclusion of the NWSL postseason, which could go until August 31 for the Reign if they make the final.

Fishlock has previously played for Cardiff City LFC, Bristol Academy WFC and AZ Alkmaar, as well as winning titles with Glasgow City and Melbourne Victory in the last year.