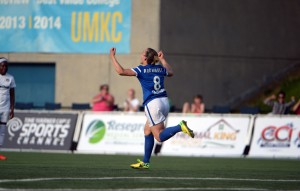 FC Kansas City clinched a home playoff game in an unlikely way on Wednesday, defeating the Boston Breakers, 2-1, in a match that last only 45 minutes.

After two hours of severe weather delays, Kansas City and Boston kicked off just past 10 p.m. ET. The two played 45 minutes and headed to halftime to a sky that saw nearby lightning return. Match officials postponed the start of the second half several times to wait out the storm. But the severe weather never cleared, and match officials called off the game.

According to NWSL rules, a game– from results to statics — can be considered official if it is played until at least halftime. FC Kansas City officially beat Boston, therefore, locking up the No. 2 seed in the NWSL playoffs later this morning.

Jen Buczkowski played a ball in behind Boston’s high defensive line, and Rodriguez went in alone toward goal, dribbling around Breakers goalkeeper Alyssa Naeher for a tap-in finish.

Rodriguez would break the trap again in the 20th minute, but this time her touch around Naeher took Rodriguez too far wide of goal. The Blues striker did, however, play provider in the 26th minute. Rodriguez played a through ball that beat all four Breakers defenders at the same time, putting forward Sarah Hagen into a 1-v-1 with Naeher. Hagen opened up her hips and curled a shot into the far side netting.

In between the home team’s two goals, Boston got one back. Kassey Kallman brought down Lianne Sanderson in the box, and Heather O’Reilly stepped up to score from the spot for the Breakers in the 16th minute.