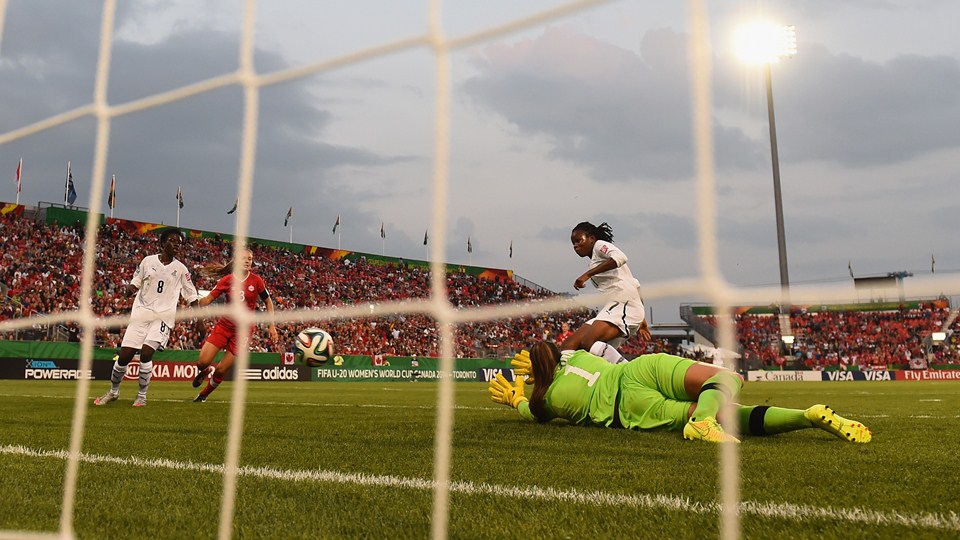 Toronto had a good showing on the opening day of the U-20 Women’s World Cup. (Getty Images)

TORONTO – Drums, drama, perfect weather – Tuesday brought almost everything FIFA 2014 U-20 Women’s World Cup organizers could have wanted. Except a win for Canada.

Set in the shadows of a city skyline dominated by the CN Tower and just off of Lake Ontario’s shore, the National Soccer Stadium played host to Canada and Ghana on opening night. Ghana won, 1-0, upsetting the hosts. But as the national team flags on the poles at the stadium better known as BMO Field sat still on the spring-like August evening, the atmosphere had the buzz and feel of a World Cup opener, dominated by Canadian fans in numbers and Ghanaian fans in noise. There was even the pomp and circumstance beforehand, as a choir of young girls lip synced and danced to a pop tune, and the Royal Canadian Mounted Police took the field.

Ghana scored in the 22nd minute, sending the African team’s fans – in large pockets around the stadium but concentrated in the Southwest corner – into an uproar. And afterward, the players danced to and with their raucous supporters.

But Canadians made up the majority of the 14,834 fans in attendance on Tuesday, and the moment wasn’t lost on Canada coach Andrew Olivieri.

“This, 10 years ago, would have been possibly a crowd in favor of Ghana,” he said, with an unintended hint of irony in light of the noise made by Ghanaians in attendance. “Just how many Canadians showed up tonight and how loud they were, that’s impressive for the progress in this country and the support we have for Canadian soccer.”

The 2014 FIFA U-20 Women’s World Cup puts on display the world’s best players of tomorrow. But it’s also very clearly a test event for the senior World Cup, which will take place next summer across six Canadian cities. (Toronto won’t be one of those cities due to hosting the Pan-American Games next summer – not because there’s real grass at the National Soccer Stadium, instead of turf, which was thrust into the spotlight Tuesday with players threatening legal action to not play on the fake stuff.)

On the field, Canada failed on Tuesday, putting itself into must-win scenarios in its final two group games. But in the stands, there was a genuine World Cup buzz. It can be seen around Toronto, too. U-20 Women’s World Cup host signs welcome passengers to the city as they exit the Toronto Pearson airport. Signs adorn the flagpoles on the sides of those quaint, waterside streets.

That is Canada’s off-field challenge in 2015 – to make the Women’s World Cup an in-demand event. On the field, they want to win their first World Cup title on home soil; the two goals are not mutually exclusive.

Germany, a country rich in soccer and specifically women’s soccer history, set the bar high in 2011. And, for the most part, fans turned out for matches that didn’t involve their German team, which shockingly crashed out in the quarterfinals.

In Canada next year, that could be more of a challenge, especially if the other city to kick off its U-20 hosting duties on Tuesday is any indication. Germany and the United States played in Edmonton, where the crowd of 10,101 was swallowed up by the cavernous green and yellow seats set back far behind the pitch. Edmonton’s Commonwealth Stadium can hold over 56,000 people.

There were hardly a few thousand fans at the Finland-Korea DPR match that preceded Canada vs. Ghana, but the official attendance for both matches is the same since they are doubleheaders.

The U-20 Women’s World Cup certainly does not have the drawing power of the senior edition, but the next three weeks may well foreshadow how crowds for matches not featuring Canada next year could look.

And of course, don’t count out that Ghanaian support in The Great White North.

“Canada is our home,” Ghana U-20 women’s coach Bashir Hayford said, with a big grin, after his team’s win Tuesday. “We have so many Ghanaians here, and they assured us of letting us feel at home. And I think we have felt it. When we advance, or when we progress, the number will be quadruple.”

USWNT drops U-20 World Cup opener to Germany
The Lowdown: sorting the NWSL with 2 weeks to play