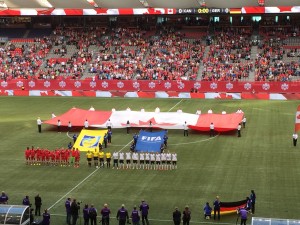 BC Place in Vancouver will host the 2015 Women’s World Cup final. It is one of six venues that will be used, all featuring artificial turf. (Photo Copyright Harjeet Johal for The Equalizer)

A group of top international soccer players has retained legal counsel in the fight to have the playing surfaces of the 2015 FIFA Women’s World Cup changed from artificial turf to natural grass.

Headlined by the last two FIFA Women’s World Players of the Year – American Abby Wambach and German Nadine Angerer – the group consists of approximately 40 national team players from around the world.

No senior women’s or men’s World Cup has ever been played on artificial turf. All six venues for next year’s Women’s World Cup in Canada are slated to feature artificial turf. The group’s lawyers – Boies, Schiller & Flexner LLP of the United States, and Canadian firm of Osler, Hoskin & Harcourt LLP – sent a letter to Canada Soccer and FIFA officials on July 28, stating that the use of an “inferior” surface for the Women’s World Cup “is discriminatory and violates Canadian law.”

In the letter, obtained by The Equalizer and confirmed to have been delivered to FIFA and Canada Soccer, the players’ lawyers argue that the use of “a second-class surface is gender discrimination that violates European charters and numerous provisions of Canadian law, including human rights codes and the Canadian Charter of Rights and Freedoms.”

The letter was addressed to Canada Soccer president Victor Montagliani and CEO Peter Montopoli, as well as FIFA president Joseph S. Blatter and Lydia Nsekera, Deputy Chairwoman of the Organising Committee for the FIFA U-20 Women’s World Cup and FIFA Vice-President and FIFA Executive Committee member.

Youth World Cups have previously been played on artificial turf, and the 2014 FIFA U-20 Women’s World Cup that begins on Tuesday in Canada will be played partly on turf in some of the same venues as next year’s Women’s World Cup.

All 2015 Women’s World Cup matches will be played on FIFA Recommended 2 Star, considered “the highest playing performance for professional-level football.” FIFA has a 103-page document detailing its turf standards.

Canada earned the right to host the 2015 Women’s World Cup in March 2011, running unopposed after Zimbabwe pulled its bid prior to the voting process. Early in 2013, players became aware that the tournament would be played on artificial turf, and a petition featuring over 40 of some of the world’s best international players was started.

Wambach first voiced her opposition publicly in March 2013, telling The Equalizer: “We’ve worked so hard as female athletes – not only here in the United States, but internationally – to grow the game and in my opinion I think this is taking a step back. All of the men’s international players around the world would argue the same point. A lot of these guys will not play on an artificial surface because it is an injury-prone surface and I don’t blame them.”’

In a Monday press conference in Toronto to inaugurate the 2014 U-20 Women’s World Cup, Blatter said that turf is here to stay.

“There was a time that playing on so-called artificial turf, grass – it was a nightmare,” Blatter said. “It was a nightmare because there was not the quality; it was just a carpet put on concrete, as they played at a certain time in the North American Soccer League in the ‘80’s. But now the quality of the turf, or the artificial grass, has improved very much, and it is definitely – it is the future.”

Blatter cited spacing issues and climate concerns as reasons for the use of turf around the world. He said that the younger generation has now grown up on artificial turf, making them potentially more accepting.

“This is for the future,” he said. “If now there is a category of players or coaches, they are not used to this new technology, which is this turf. They say at the first instance, they say it’s not good. But it’s good.”

Last year, Germany coach Silvia Neid said her team is against the use of artificial turf: “A World Cup on artificial turf is a no-go. It’s just not possible. We’ll be turned into guinea pigs. It’s a completely different game on that surface. FIFA has to make sure that we play on proper fields. Or what would you say, if our men’s team would have to play on sand in Brazil?”

The contingent of players considering legal action also includes Alex Morgan, Verónica Boquete and Heather O’Reilly. None of the players involved are Canadian.  Representing the group from Boies, Schiller & Flexner is Hampton Dellinger, along with Rocky Collis, Tristman Mallet and Catherine Gleason-Mercier from Osler, Hoskin & Harcourt..

Boies, Schiller & Flexner LLP was recently involved in the Ed O’Bannon vs. NCAA lawsuit arguing for reform of NCAA rules that prevent college players from sharing in revenues from broadcasts and licensing such as video games.