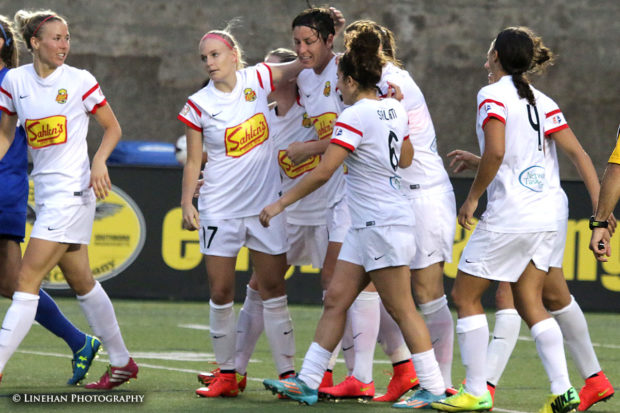 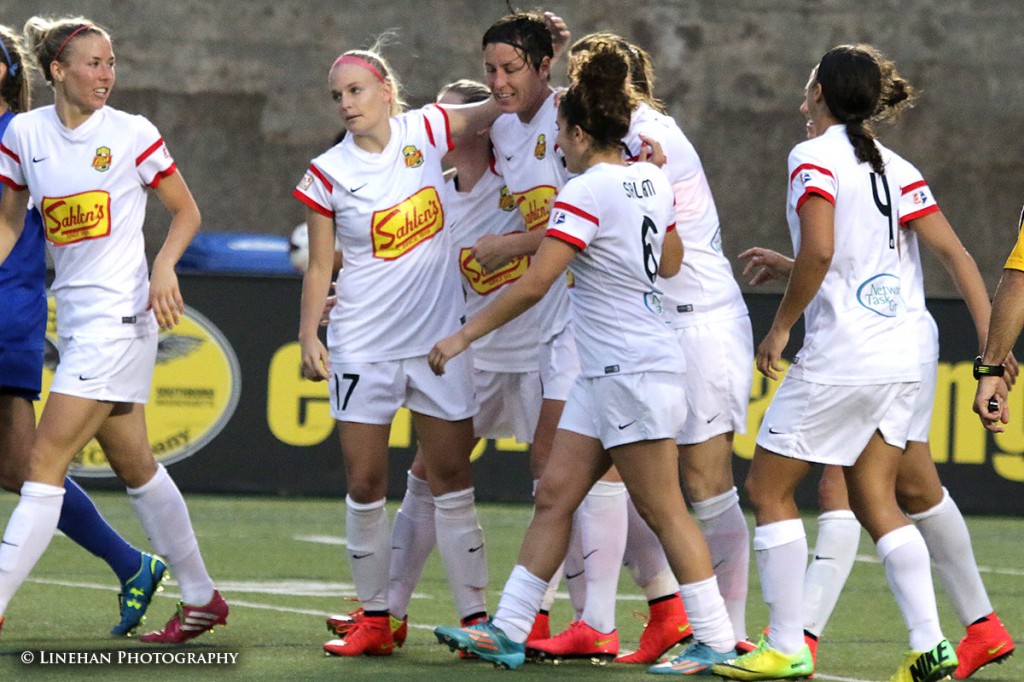 Abby Wambach scored her first two goals since May 25 and the Western New York Flash kept slim playoff hopes alive with a 4-3 win over the Boston Breakers on Sunday at Harvard Stadium.

Kristie Mewis scored her first two goals of the season for the Breakers and looked to have earned her team a share of the points, but Western New York’s second-half substitute Sonia Bermudez tapped in the game-winner in second-half stoppage time on a feed from Sam Kerr.

Wambach finished a tap-in early in the first half and a much more difficult shot just after halftime to lead her team to victory. She returned from a two-month injury layoff on Thursday, when the Flash lost 1-0 on the road to Sky Blue FC. After Thursday’s loss, Wambach accepted much of the blame for the loss that seemingly ended the Flash’s playoff hopes. 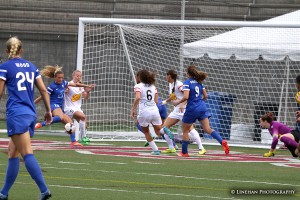 Kristie Mewis scored twice for the Breakers on Sunday in a loss to the Flash. (Photo Copyright Clark Linehan for The Equalizer)

On Sunday, she put her team ahead in just the 8th minute, tapping in a loose ball that opportunely found her feet. After missing on her attempt to tap-in the initial cross, Wambach got a second chance following a deflection of Breakers defender Cat Whitehill that sent the ball right back to Wambach for the easy finish.

Boston responded with spurts of pressure, and the Breakers were rewarded in the 28th minute when Mewis scored her first goal of the night and the season. Breakers defender Bianca Sierra fought to keep the ball alive on the right side of the 18-yard box and sent a low cross in toward the back post, where Mewis beat the Flash defenders to the ball and roofed her shot for the equalizer.

A flurry of five second-half goals followed the break. Wambach chipped Naeher in the 49th minute to give the visitors the lead, and Western New York made it 3-1 in the 66th minute when Kerr finished off an extended sequence. After Adriana Martin and Wambach played the ball between themselves on the left flank, Martin sent a cross to the back post for Lloyd, who headed it straight back across the goal to Kerr. The Australian finished the ball with a diving header for her team-leading eighth goal of the season.

Jazmine Reeves cut the Flash’s lead to 3-2 when the rookie forward finished an unmarked header from six yards out in the 74th minute. Two minutes later, the last-place Breakers were level after Mewis gained separation and smashed a left-footed shot past Flash goalkeeper Kesley Wys and into the top of the net.

But on the brink of near-elimination from the playoffs, Western New York found a way to stay alive for another week. Whitehill coughed up the ball in her own half and Kerr dribbled in alone down the right side, crossing the ball to an unmarked Bermudez for the tap-in in stoppage time. Bermudez entered the match in the 83rd minute.

Western New York next plays on August 13 at home against Sky Blue FC. By then, the Flash will better understand where their shot at the playoffs after Portland and Chicago — currently No. 4 and No. 5, respectively — have played more matches. The Flash end the season at Chicago on August 16.