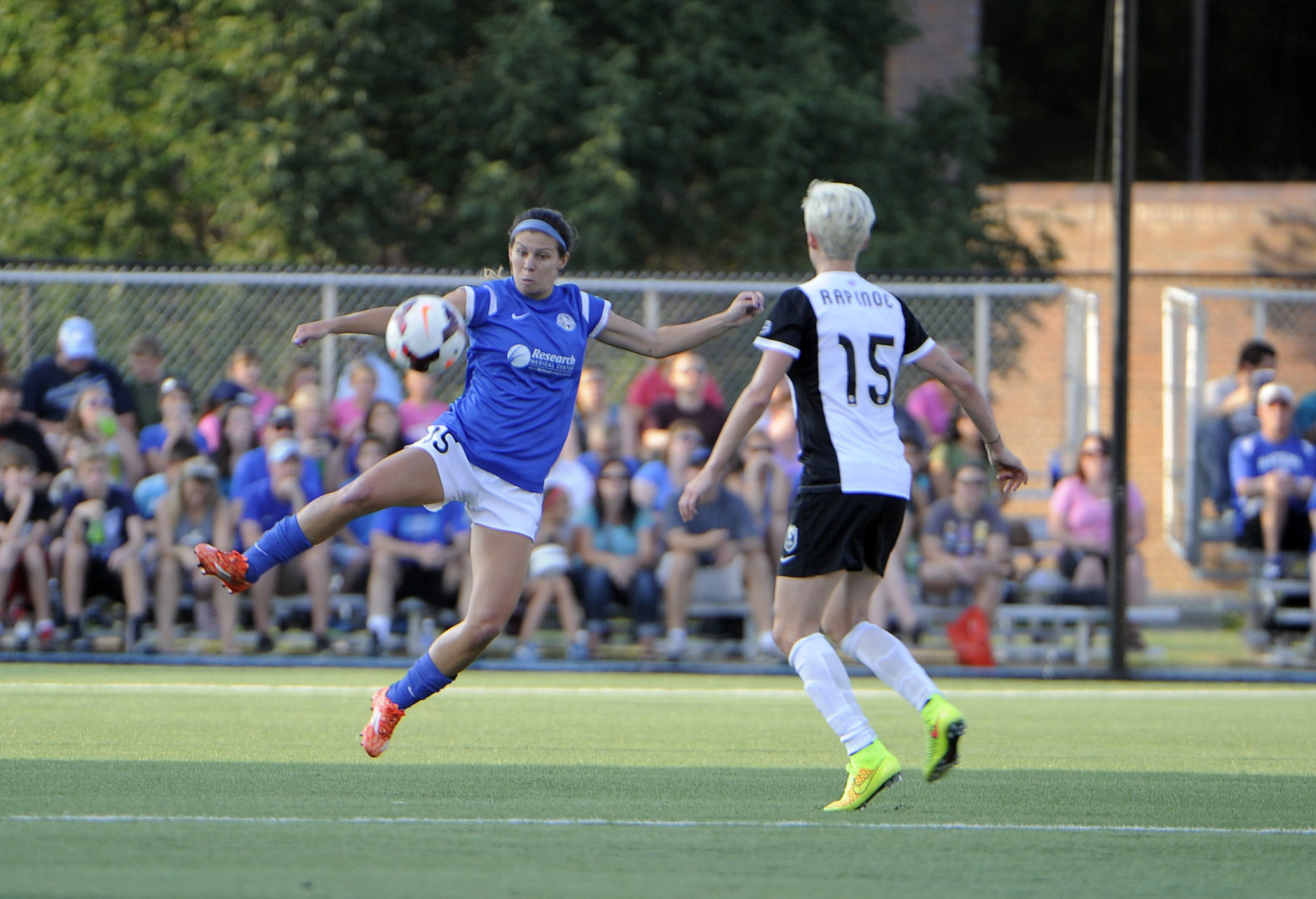 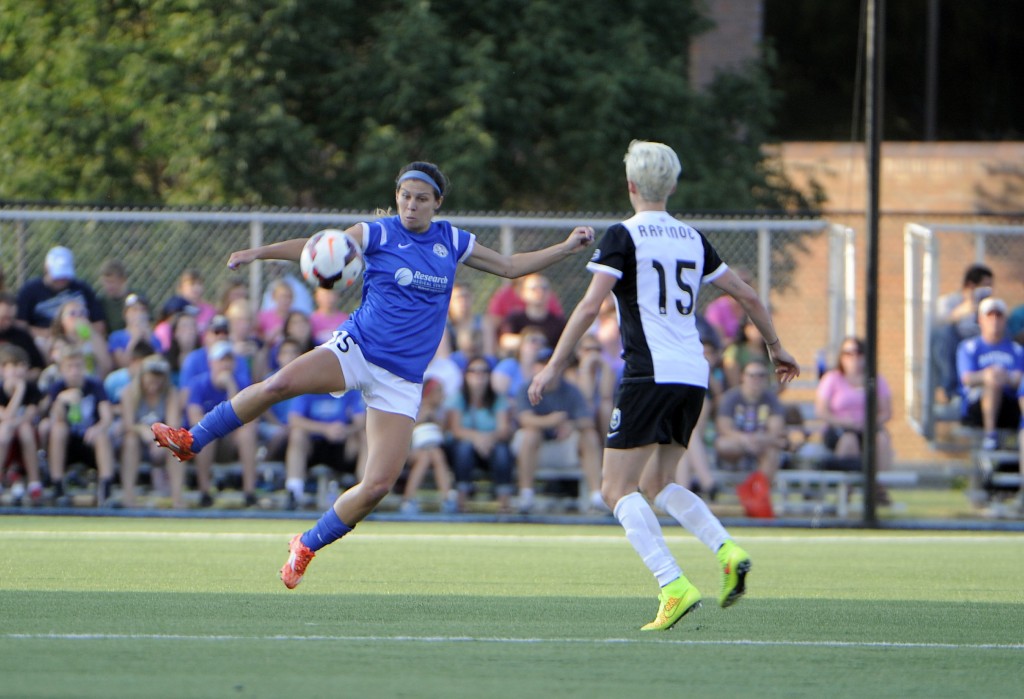 Kansas City’s second-largest crowd of the season saw each team show off their strengths. The Blues dominated the first half of action, with Amy Rodriguez scoring early in the match. But Seattle came out in the second half with the same offensive flash that has made them the NWSL’s best team all season, and Megan Rapinoe scored the second-half equalizer.

FC Kansas City started their fifth different lineup in six games tonight with Amy LePeilbet getting the start on the right side of the back line. Leigh Ann Robinson missed the match to attend a friend’s wedding. Once again, the new lineup gelled right away for the Blues as they only needed six minutes to score.

The play started with Lauren Holiday crossed the center line towards the Reign goal. Seattle’s defense allowed her the space to dribble all the way into their defensive third. As she approached the penalty box, she lobbed an easy chip over the back line where Rodriguez could run on to it, giving her a 1-v-1 opportunity against Reign goalkeeper Hope Solo. Rodriguez faked her shot right, but curled it into the left side of the net, giving her 12 goals this season.

[MORE: Reign would host NWSL final at Starfire Stadium, if they advance]

Solo was tested several times in 1-v-1 situations throughout the night. After the initial goal, the U.S. national team goalkeeper stood tall and made excellent saves against both Rodriguez and Sarah Hagen on second-half breakaways.

The first half was completely dominated by Kansas City. At the break, the Blues held an 8-1 shot advantage, 5-0 on goal. The Reign’s only shot in the opening period came in the 33rd minute, when Noguiera headed a cross from Little wide of the net. Kansas City held the bulk of the possession for the half and played like a team who was still looking to clinch their spot in the postseason.

Reign FC is 15-1-5 (50 pts.) this season, with many of those points were earned with come-from-behind efforts. Saturday was no exception. Seattle’s increased pressure on the Blues’ defense forced Kansas City head coach Vlatko Andonovski to go to a one-forward system, leaving Sarah Hagen to run the top line and dropping Amy Rodriguez back to help in the midfield.

By the 60th minute, Seattle had cut the shots deficit to 10-7. The pressure finally broke through in the 68th minute. when Kim Little successfully dribbled up the end line and tried for a cross to Sydney Leroux inside the six yard box. While Leroux was able to get her head on it, Nicole Barnhart was right there for the save. Fortunately for Leroux, her teammate, Megan Rapinoe, was in the perfect position to put away the rebound and tie the match.

Play evened out following the score as each team tried to find the go-ahead goal. Kansas City came close late in the match when Hagen broke free along the right side of the goal box. The Reign defensive player slid in from behind, taking out Hagen, but also punching the ball along to KC forward Katrina Gorry. The referee allowed play to continue, even though Gorry was unable to create any kind of advantage from the play.

“I thought it was a clear foul,” said Hagen. “Erika (Tymrak) played a ball in with a lot of pace and I got to the ball first. My touch was into space and she came in late.”

Andonovski was not satisfied with the lack of a call in that situation. He was careful to stay away from saying anything that would bring down league fines, but he implied that the team would seek league review on the play.

Ultimately, the teams had to settle for another draw, even following five minutes of stoppage time due to a cooling break. Both teams play at home on Wednesday night, FC Kansas City against Boston and Seattle against Houston. A win on Wednesday would lock up the No. 2 seed for Kansas City, who already clinched a playoff spot earlier in the night by way of the Washington Spirit beating the Chicago Red Stars.