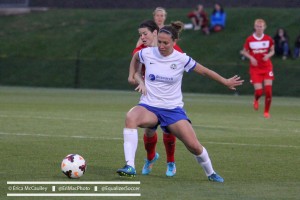 A few weeks ago this looked like a pivotal match for both sides, but FC Kansas City has hidden from the pack a bit in 2nd place while the Spirit are trying to finish on a high to stay in the top four. And they will have to do it without Jodie Taylor, who will be trying to crack the England squad ahead of a Sunday match against Sweden. Mark Parsons has been mum as to who will replace Taylor on the field, but the bigger issue for the Spirit of late has been in back. And the Blues can attack with various weapons with Amy Rodriguez and Sarah Hagen up top and Lauren Holiday and Erika Tymrak out of midfield. A win will clinch a playoff berth for FC Kansas City.

What to watch for: The recent tweak to the Blues’ shape means that Leigh Ann Robinson has been assigned duties that include more running and covering more ground. The Spirit can stick Diana Matheson on Robinson’s side in an effort to keep her pinned into a defensive role and open it up for the Spirit to control the midfield. Without Taylor up top it will be difficult for them to make a positive impression without controlling Kansas City’s crisp ball movement through midfield.

If FC Kansas City does not beat Washington the Reign will have a chance to wrap up the regular season championship in this match. It will take a win and a Blues draw or worse or a draw and a Blues loss. And they’re fresh off what may have been their sharpest performance of the season, a 5-0 win over the Thorns on Sunday. The Dash are all but out of playoff contention mathematically so they are finishing up for pride and the continued development of Randy Waldrum’s system. And Dash fans have enjoyed the improvements of their 1st franchise draft pick, Kealia Ohai.

What to watch for: Elli Reed and Stephanie Cox have turned into the best outside back tandem in NWSL and both do their part to get forward throughout the match. Containing them will be a difficult proposition for the Dash who are not particularly efficient in possession. However if the Dash can use the speed of Ella Masar and find seems for Ohai to run at they stand a chance at breaching the league’s most stingy defense.

The Flash, four points out of a playoff stretch as of Wednesday, play their first match since Aaran Lines declared them finished and playing for next season. Since then Spirit coach Mark Parsons has accused Lines of using that comment as gamesmanship, and they have gotten more than one favorable result. They also get a favorable opponent, Sky Blue, who they have banged around and beaten routinely since losing at Yurcak on opening weekend of the league in April 2013. The Flash might not be mathematically done but they likely do need all of their remaining points. Katherine Reynolds won’t play due to the high ankle sprain she suffered last week. Neither Christie Rampone nor Abby Wambach were mentioned on the injury report.

What to watch for: One of the issues with the Flash this season has been lack of attention to detail. They have been great defensively at times but porous at others. Enter Nadia Nadim. Sky Blue’s recently signed Dabish forward has been a find and her high work rate allows her to punish opposing defenses for the slightest misstep. She has also clicked with Kelley O’Hara and just made Sky Blue look overall better. They’re probably not going to the playoffs, but a decent consolation prize would be putting one of the final nails in the Flash’s coffin.