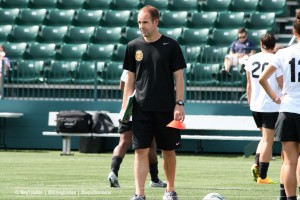 The Flash are only 4 points out of a playoff spot, but coach Aaran Lines says winning out won’t be enough. (Photo copyright Meg Linehan for The Equalizer.)

It was a rough week for the 2013 finalists.  The Flash’s home loss to the Breakers on Friday night led their coach, Aaran Lines, to raise the verbal white flag and start talking about 2015.  Two days later the Thorns’ blowout loss in Seattle moved their coach to call the performance unacceptable.

“It’s not going to happen for the Flash,” Lines said after Friday’s loss to the Breakers in comments published by Jeff DiVeronica in the Democrat & Chronicle.  “At this point it’s about finishing up the season with a bit of pride, players playing for jobs next year.”

Those are bold words from the coach who is as measured with his words than any in NWSL, especially because the Flash are far from mathematically eliminated despite their gaudy, 7-10-3 record.  Pressed about whether he thought winning out would do the trick, Lines said, “I don’t think 12 points does it.  It’s between Washington and Chicago.”

Lines, who has three championships and a runner-up in his last four seasons with the Flash, looked perturbed in his postgame media session.  And who knows if he was speaking from the heart or attempting some last-ditch motivation ahead of the final four games.  The Flash also received help the next two days, first when the Red Stars were held to a scoreless draw at home by the Dash, and then when the Reign routed the Thorns, 5-0 on Sunday.

In fact a closer look shows the Flash are very much in the race if they can win out.  In fact if the Spirit beat the Red Stars on Saturday it will give restore control to the Flash, who would then surpass the Red Stars by beating them on the final day of the season and assuming similar results in between.  Even the Thorns, six points ahead, need to lose only once for the Flash to catch them.  And their crushing loss to the Reign dropped their goal difference to +4 while the Flash are +5 despite being under .500.  The Thorns and Flash split their season series so if they finish tied on points, goal difference will be the first tiebreaker.  And while the Thorns have played to the wildest score lines of the season in both wins and losses, an additional loss would reduce their goal difference at least for that match.

The bigger question for the Flash is whether can are good enough to earn their final dozen points.  They have owned Sky Blue and play them in two of their final four games.  They also visit Boston where the Breakers are in last place but just won 4-2 in Rochester in the match that convinced Lines the playoff chase was futile.

“It’s just a shame because we’ve got a really, really good team,” Carli Lloyd said.  “We’ve got quality players, but sometimes that’s not enough.  It’s whoever wants it most on every game day.”

The opening minutes of Friday’s match saw the Flash grab an early lead and it looked for all the world they would win safely against the league’s bottom side, playing its seventh consecutive away match.  They’ll be looking for a four-match winning streak, but in 20 games so far their only consecutive wins were May 7-11 over FC Kansas City and Sky Blue.  That ended a stretch of three straight without a loss, and in the 15 matches since they have not played two straight without losing.

Over in Portland, Ore., the Thorns are licking their wounds after being drubbed by the Reign.  Nadine Angerer let an early goal slip through on the near post, poor defending allowed Kim Little to score in second-half stoppage time, and there were three other goals in between.  The Thorns did have some chances to get the match to halftime level, but every time the stakes were raised it was the Reign that responded.

The first-year coach of the Thorns was particularly displeased with the lack of effort near the end of the match.  “I think (the midfield) have done a good job for us so far this season, but I think it’s the first time this season they really threw the towel in and you can’t throw the towel in.  I don’t care if it’s 8-0, 9-0, you keep going, you keep playing.”

The Thorns have already finished their season series against the Flash and Red Stars and they split with both.  That means it will come down to goal difference if they finish level on points with either team.  The lopsided loss dropped the Thorns’ goal difference to +4, same as the Red Stars and one behind the Flash.  And that is one of two reasons why it particularly bugged Riley that the 5th and final Reign goal came without much defensive resistance.

“That last goal was just unacceptable,” he said.  “You’ve got Nikki Marshall and Emily (Menges) holding a player off and everyone else just standing there watching.  That could be the goal, 5-0 instead of 4-0 could be the difference between getting in and not getting in the playoffs.  So you keep playing til the end.”

Riley also mentioned the large group of fans who made the trip north from Portland to be part of the Seattle women’s soccer record, 5,957 at Memorial Stadium.  “These fans come all this way and cheer you on and they don’t get the job done? No one wants to tackle, no one wants to fight for that last one.”

Adding to the Thorns’ woes on the weekend was that Rachel Van Hollebeke suffered a concussion that forced her out of the match at halftime.  Still the Thorns sit 3rd—“fighting for our lives,” Riley said—and although the Spirit and Red Stars both have more maximum points than they do, those two play Saturday meaning one or both will fall off that pace.

Here are a few soccer-related takeaways from Week 16:

— Having watched all three variations of professional women’s soccer in the United States I am comfortable saying Nahomi Kawasumi has the best cross I have seen.  She whips them in with a superb combination of pace and placement, and she is adept at getting herself into positions where she is able to gain some space to work with.

— At one point this season Nadine Angerer was easily the most effective goalkeeper in NWSL.  But her performance has tailed off in recent weeks.  Sunday, she let Sydney Leroux’s admittedly well-placed shot from a wild angle slip through a small crevice at the near post, setting the tone for the Reign’s 5-0 win.

— All credit to the Breakers who never stopped playing hard during what longest and most ludicrous stretch of road matches we have seen in women’s pro soccer here.  It was the seventh and final game of the stretch and the team had every excuse to hang its collective head after a bit of ghastly defending put them behind 1-0.  But they were the superior side the rest of the way and finished the road trip 1-4-2 instead of winless.  The Breakers won’t make the playoffs, but they are to be credited for not packing it in.

— That last goal Paul Riley fears could keep the Thorns out of the playoffs may also decide the Golden Boot.  Kim Little scored it to give her 12 on the season and leave Jess McDonald, Jodie Taylor, and Amy Rodriguez behind on 11.  Rodriguez had scored earlier Sunday to join that party.  Of the four, McDonald is at the biggest disadvantage in her current role coming off the bench for the Thorns.

— Christie Rampone missed the weekend with a concussion and Sky Blue dearly missed her in a 2-1 loss to FC Kansas City that saw more breaches in the center of the defense than normal. Rampone is likely to play Thursday against the Flash.

— Renae Cuellar’s season is over due to a partial meniscus tear.  Cuellar was an early star of NWSL, netting the first goal in league history and scoring four times in the first five games.  But she soon fell out of favor and was traded to Seattle, and then to Washington this offseason.  With the Spirit, Cuellar has seen just 408 minutes in 10 matches.

— I’ve been as a big a referee critic as anyone over the last few weeks, but it should also be acknowledged when we get through an entire week and they are not an issue.

— There are times Brittany Taylor looks like the best center back in NWSL.  But she has made too many fatal mistakes for the Flash this season.

— If FC Kansas City beats the Spirit on Wednesday, they clinch a playoff berth. A draw won’t clinch officially but the Spirit would have to overcome 20 goals to avoid losing a tiebreaker. Regardless of Wednesday’s result, FC Kansas City has to beat the Reign on Saturday to stay alive in the battle to finish 1st. The Reign clinch it with a draw. If FCKC loses in Washington they would have to win out and have the Reign lose out while making up at least 17 goals.

— FC Kansas City can clinch a home playoff game with at least four points from their two matches this week or with a win over the Spirit and a Red Stars loss or draw against the Spirit or a win over the Reign and a Spirit-Red Stars draw.