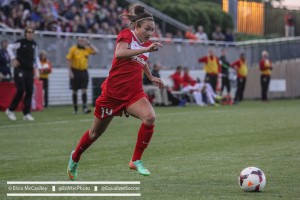 Jodie Taylor leads the Spirit in goals, something they’ll need to beat the Thorns for the first time. (Photo Copyright Erica McCaulley for The Equalizer)

Portland Thorns FC (8-6-5) at Washington Spirit (8-8-3) Maryland SoccerPlex Wednesday, 7 pm EDT Series: Thorns lead, 4-0-0 (2-0-0 in 2014) Big one here. The Spirit exit a tough week when consecutive road trips to Houston and Sky Blue yielded just one point. Suddenly they are clinging to the final playoff spot on the strength of their tiebreaker edge over the Red Stars. On the flip side a win would vault them back over Thorns into 3rd, and it would be their first result against the league champs. Through nearly two seasons the Thorns are 4-0-0 over the Spirit and have a 12-2 aggregate score line. Half those goals came in their last meeting, also at the Plex, and was the first of three Thorns wins that have been by a combined 19-5. The Thorns have five other games sprinkled in there and have no wins and no more than two goals scored. The Thorns won’t have Tobin Heath, Sinead Farrelly, Rebecca Moros, or Courtney Niemiec, all out through injury on what is expected to be a steamy evening at the SoccerPlex. What to watch for: The Thorns have not had a clean sheet since their first meeting against the Spirit this season—June 15. Since then it seems as if keeping them to two goals or less means a great chance at getting a result. But how to do it, especially with the Spirit’s unsteady personnel on the back line? They’re have to be far better than last time they hosted the Thorns, and far better than Sunday when they trailed Sky Blue 4-0 near stoppage time. An early goal could put the Thorns back on their heels and dramatically change the game. Boston Breakers (3-13-2) at Western New York Flash (7-9-3) Sahlen’s Stadium Friday, 7:30 pm EDT Series: Flash lead, 2-1-2 (1-0-0 in 2014) The longest road trip in the league so far comes to an end for the Breakers, and they are still looking for their first win. The Breakers are 0-4-2 so far and winless in seven straight overall. They are on the verge of mathematical elimination—anything but a win will do it and they could be out by kickoff if the Spirit win—but they can see about doing in the Flash who they play in this one and again in their return to Harvard Stadium a week from Sunday. The Flash are 6th but within range and heading into the softest part of their schedule. They also could have Abby Wambach in the fold for this one, but likely won’t make the call until they absolutely have to. What to watch for: The Breakers are back to being messy in the back as evidenced in their 6-3 loss in Portland on the weekend. To have success they’ll have to control the midfield, and even then could be vulnerable to the Flash and their multitude of free kick takers and long ball specialists. Additionally if Wambach returns that gives the Flash a huge aerial target who is willing to not only score but win difficult balls for teammates.