Thorns on a roll: Sinclair, Morgan finding chemistry with Boquete in midfield 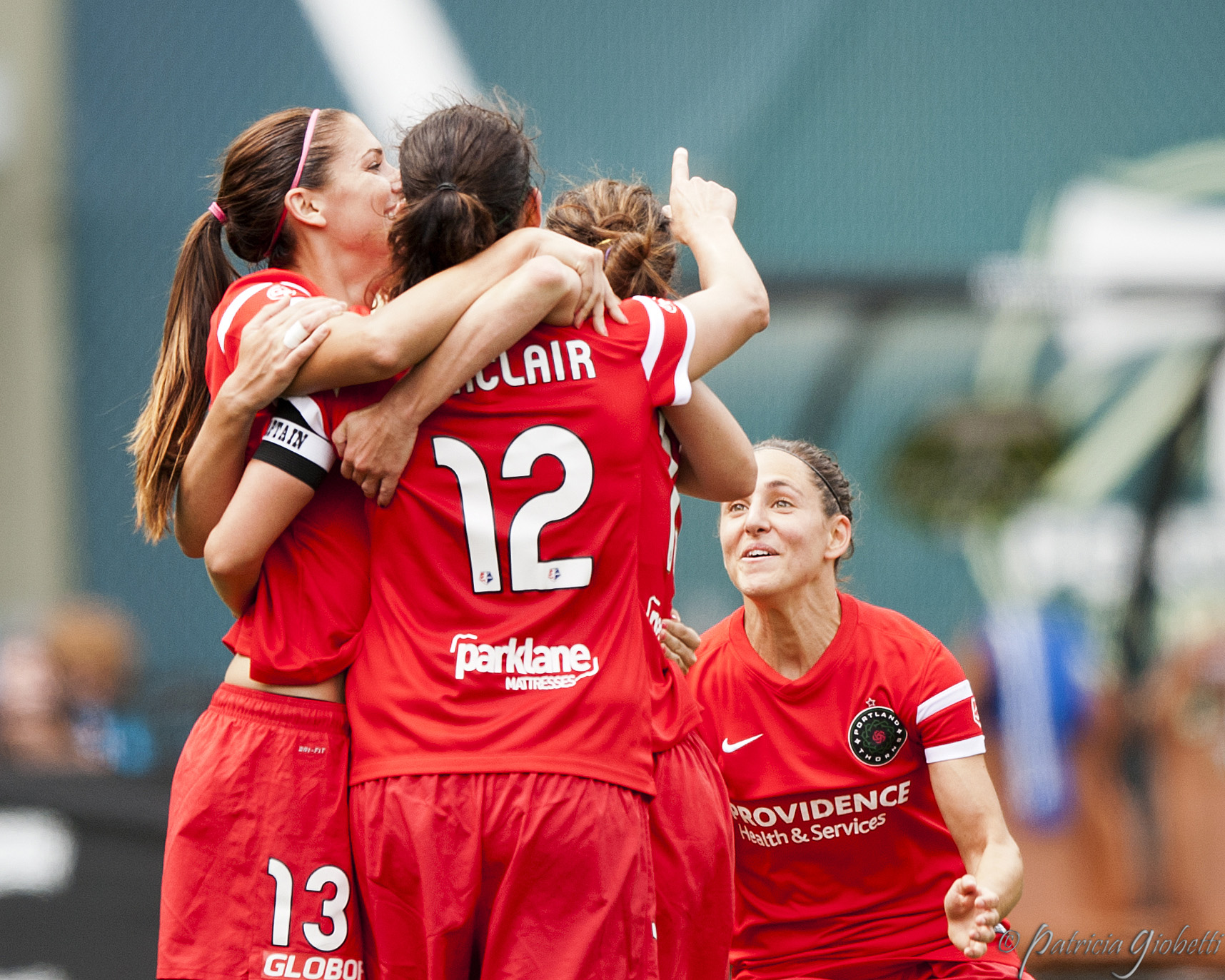 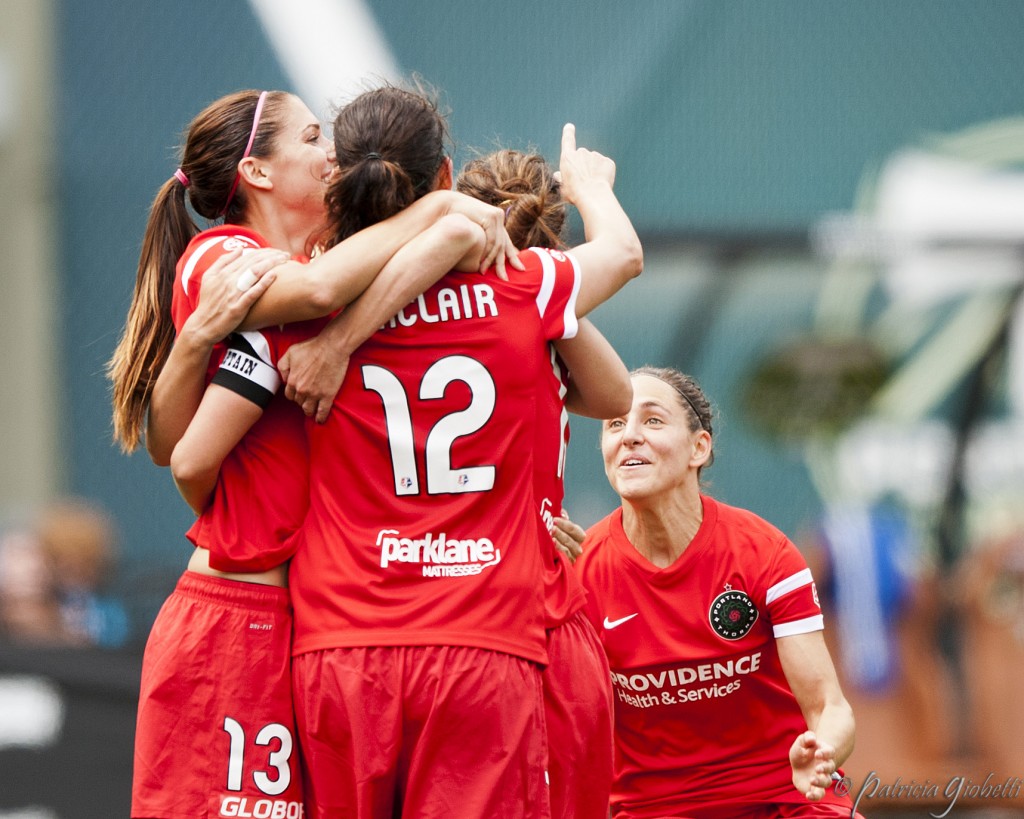 Alex Morgan, Christine Sinclair and Veronica Boquete are on the same page, and the Thorns are on fire. (Photo Copyright Patricia Giobetti for The Equalizer)

When Christine Sinclair and Alex Morgan were allocated to Portland Thorns FC prior to the NWSL’s inaugural season, the collective feelings elsewhere around the league were two-fold: How could two of the world’s best strikers land in the same place in a fair distribution of allocated players?

And how the heck is any team supposed to stop them?

The first question may always be part of the dialogue in retrospect, but the second played out better than expected for opponents in 2013.

Morgan finished last season with eight goals and five assists, while Sinclair scored eight times and added two assists. Both were respectable stat lines, but the pair was never as dangerous as expected, and often failed to click when on the field at the same time. Sinclair’s best matches in 2013 were at the end of the regular season, when Morgan was hurt.

“Last year with Alex and I playing together, it actually didn’t click very well, to be honest,” Sinclair said before the start of the 2014 season. “Part of that was I dropped down into midfield towards the middle of the season.”

On Sunday, however, those struggles were distant memories. Sinclair scored a hat trick — two of the goals assisted by Morgan — and Morgan added a goal of her own in a 6-3 win over the Boston Breakers. In their past two home games, the Thorns have scored 13 goals; Sinclair has four goals and an assist, Morgan two goals and three assists.

Suddenly, over a month after Morgan returned from seven months off due to an ankle injury, the Canadian-American duo is clicking up top.

“We’ve moved very quickly in terms of our chemistry,” Sinclair said after Sunday’s big victory. “I think we’re playing better together in the short time this season, because of her injury, than we did all of last season. Things just seem to be coming together between us, just finding each other. I think this year we’re playing a lot closer together, so it’s easier to find each other, and then you throw someone like Veró [Boquete] into the mix and it just sort of brings everything together.”

Morgan agreed, also noting that Sinclair is now higher up the field with Portland’s full lineup in place.

“Since I’ve been back and Sinc has been playing more as a forward rather than an attacking midfielder, we’ve just developed a better relationship on the field,” she said. “We just anticipate each other’s runs, and I think we always know where each other are, which is important as a two front. It just showed today. It showed the last couple games, and then when [Thorns forward] Jess [McDonald] comes in she makes an impact immediately. I think it’s a good thing the forwards have going right now.”

Both Morgan and Sinclair acknowledge that Boquete’s introduction to the Thorns has been invaluable. Portland coach Paul Riley refers to Boquete as possibly the best No. 10 playmaker in the world, and the Spanish midfielder and 2011 WPS MVP is proving to be the glue that holds Portland together, and the catalyst that ignites the two star Thorns strikers.

With Boquete occupying the attacking midfield role — AND finding the feet of her strikers — Sinclair doesn’t feel a pressing need to drop deeper just to get touches on the ball. And Morgan, who at one point last season said she felt alone up top as Portland struggled, has someone constantly rewarding her for her runs.

Boqeuete had the ball on a string on Sunday, changing direction on a dime and threading nearly impossible needles to beautifully find Sinclair on the Canadians’ first goal.

“All the dictation that comes from Veró though, she’s the one that holds the ball up,” Riley said. “She twists and turns, she changes direction. Everybody thinks she’s going that way and then she’s the other way.”

For Portland, the triangular connection and recent offensive explosion could be enough to cover up what has been a sometimes leaky defense that’s susceptible to the counterattack, as seen again on Sunday against the last-place Breakers.

And it can’t go without being said: Portland’s two leading scorers are in the top five league-wide. McDonald is tied for the league lead with 11 goals, while Allie Long has nine goals. Both players have carried the load for Portland, particularly early in the season when Morgan was hurt and Sinclair was struggling in front of net.

This Thorns team feels a lot like last year’s: Inconsistent but at times world-beaters, always on the verge of turning in a sleeper or an absolute rout, as they have twice in the last week-plus. If they can turn things on in the stretch run as they did in August last year, and Morgan and Sinclair can continue to progress together, Portland won’t be a team anyone wants to play in the postseason.