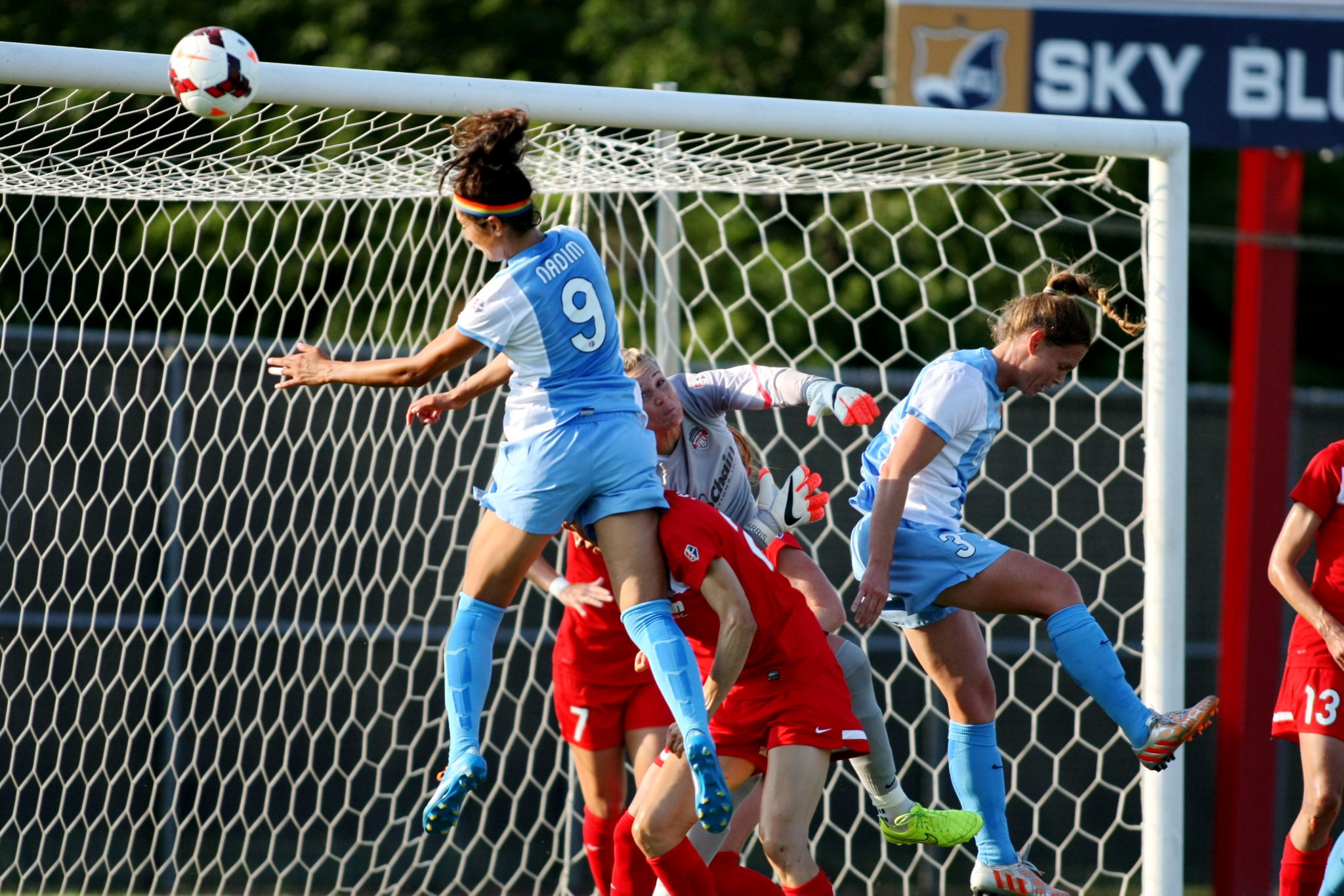 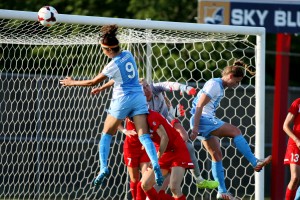 Nadia Nadim (9) scored a goal and added an assist in her first NWSL start, a 4-2 Sky Blue win over the Spirit. (Photo Courtesy Robyn McNeil)

PISCATAWAY, N.J. — Nadia Nadim made good on her first NWSL start with a goal and an assist to lead Sky Blue to a 4-2 victory over the Washington Spirit on Sunday night at Yurcak Field.  Nadim was a thorn in the Spirit’s side throughout the night, which was Sky Blue’s best performance of the season.  Kelley O’Hara had a hand in all four goals with two goals and two assists.

“The biggest difference was we put our chances away,” Sky Blue coach Jim Gabarra said.  “The couple chances they had either Jill (Loyden) made a big save or they didn’t punish us.”

The opening few minutes did look promising for the Spirit and Jodie Taylor had an early chance that was saved nicely by Loyden.  “We talked about that.  There’s moments in the game that we have to really focus and concentrate on,” Gabarra said.  Sky Blue took that focus and went on top in the 21st minute.

Nadim turned and played a ball back to rookie Maya Hayes.  The 1st Round pick waited for the perfect moment to put a return ball through to Nadim.  Kelley O’Hara made the support run and Nadim gave her the ball in front of goal, where an easy tap in made it 1-0.  In the 36th Sky Blue scored off a box-to-box buildup and it ended with O’Hara playing wide to Sophie Schmidt, who snuck around the defense on the right side and beat Ashlyn Harris on the finish.

The second half featured a slower pace to start but the Spirit did not make too much of an impression.  Diana Matheson, trying to catch some rest, came off the bench to spell Christine Nairn and brought some good energy to the proceedings.  Crystal Dunn, nursing a hamstring injury, made her appearance in the 78th.  Shortly thereafter Sky Blue quickly doubled the lead.

Another quality buildup started by Cami Levin wound up with Nadim and O’Hara playing a give and go down the left side.  The final pass was O’Hara putting Nadim through and she easily beat Harris for her first NWSL goal.  “This past week we finally had a full week of practice to work on how we want to attack and to work on our connection and our passes and our rhythm,” O’Hara said.  “Because that’s been lacking all season.  We really had a goal and a game plan and we stuck to it.  It was really fun playing with her.”

In the 85th, a Loyden goal kick led to a Nadim shot that Harris made a save on.  Tori Huster’s clearance went right to Jonelle Filigno who took a few touches and passed it to O’Hara.  Unlike her tap-in goal in the first half, O’Hara upped the degree of difficulty by dribbling around Ali Krieger and blasting a shot between defenders and curling it around Harris to make it 4-0.

“I had time to look up and kind of squared up on Krieger,” O’Hara said.  “I’ve been working on that shot all week so it was nice to put it in.”

The shutout went by the wayside when the Spirit grabbed two late ones.  Taylor scored off a corner kick after a scrum in front of Loyden.  Moments later Robyn Gayle got her head on a Veronica Perez cross to make it 4-2.  But time ran out on the Spirit who finished the week with a single point from games away to the Dash and Sky Blue.