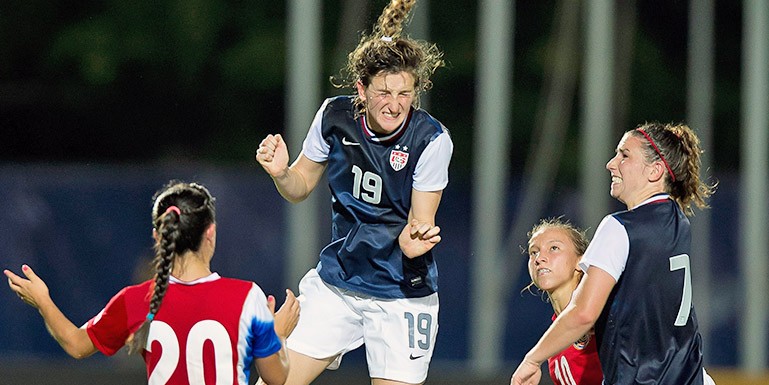 Andi Sullivan (19) will co-captain the U.S. U-20 women at next month’s World Cup. (Photo Courtesy CONCACAF.com)

In a few weeks the 2014 U-20 Women’s World Cup will kick off in Canada. The U.S. is looking to rebound from disappointing results in youth World Cups since winning the last U-20 World Cup in 2012. The U-17 program failed to qualify for the 2014 World Cup that was held in March, while the 2012 U-17 team failed to advance to the knockout round in the World Cup held in Azerbaijan after drawing a difficult group.

Midfielder and co-captain Andi Sullivan will be a key member for the U-20s in Canada next month.

“I learned that every goal counts, every second counts,” she said. “Every minute is so important in the World Cup…There are some tiny moments that are short that end up being huge moments for either team. So I think just being tuned in for every second of every game and lots of energy (is important). We were eliminated by goal difference with 5 points so it was little bit of a heart-breaker because we didn’t lose a game.”

In 2014, the U-20 team once again finds itself in a difficult group having drawn Germany, Brazil, and China. Their first group match is against Germany, the team that the U.S. beat in the U-20 World Cup final in 2012.

Sullivan, the No. 1 recruit in this year’s incoming college freshman class (she’s headed to Stanford) may help reverse the alarming trend. She possesses great technical and tactical skill, which she used to not only provide great service to her teammates during January’s CONCACAF qualifying tournament, but to score herself as well.

She’s also versatile and has played several positions on youth national teams. In January’s qualifiers, Sullivan played right back for the first time. The move turned out okay for her and the U.S. defense as the team held its opponents scoreless throughout the tournament.

Aside from her physical abilities, the role Sullivan has taken on with the team is also quite remarkable. Sullivan, who turned 18 years old last December, was chosen by head coach Michelle French to don the captain’s armband several times during the qualifying tournament, although she was the youngest person on the roster.

“My teammates don’t make me feel so young,” Sullivan said of the experience. “They really bring out the best in me and the most in me so wearing the armband was a privilege for such a great group of girls. Hopefully I get the chance to wear it again sometime soon. If not, it was still a great opportunity for me.”

Sullivan will get another chance to don the armband, as she been named a co-captain for next month’s tournament along with defender Cari Roccaro. Sullivan won’t be the youngest member of the U-20 team next month, however, as some new, younger faces have been introduced since qualifiers, including 16-year-old Mallory Pugh. Sullivan admits that having younger players on the team is nice as she’s no longer the “butt of every joke.”

In truth, the midfielder should be used to teammates bantering her about her age. In July 2012, Sullivan played a handful of games with D.C. United Women. Sullivan, then a rising high school junior, was the youngest player to suit up for the USL W-League side that year. Sullivan found herself playing alongside professionals like Lianne Sanderson, Joanna Lohman and U.S. national team defender Becky Sauerbrunn, who played with D.C. United Women after WPS folded earlier that year.

Sullivan and the U-20 team start their World Cup journey on August 5th against Germany in Edmonton. The game will be televised on ESPNU.