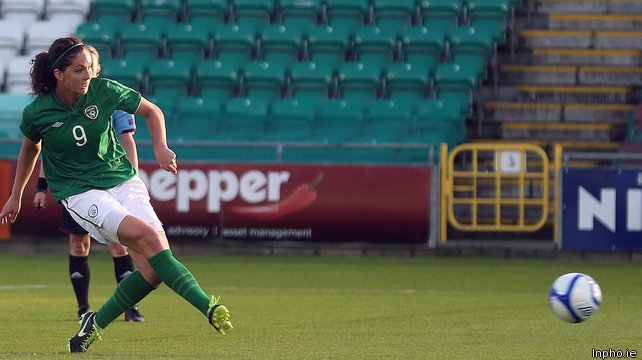 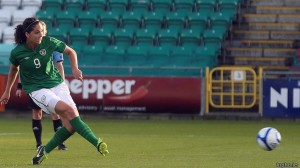 As many Americans have returned home from clubs abroad to play in NWSL this season, including U.S. national team pool members Christen Press, Yael Averbuch, Whitney Engen and Meghan Klingenberg, to name a few, one experienced American abroad comes home only to run her summer soccer camps before returning to Europe, where she has built a successful career, both at the club and international level.

Fiona O’Sullivan grew up in Northern California and played four years at the University of San Francisco. A forward, she was drafted by the Chicago Red Stars in 2010 but went to Europe instead.

“I felt I had better opportunities in Europe—for multiple reasons it was a complete fit,” she said. “I just have seemed to find really good situations so far over in Europe. I really enjoy the culture over there and in terms of playing for my national team; it’s also been a favorable situation—very close. Another thing that has kept me away from the States—one of the main reasons—I have a soccer school that I do in the summer. The U.S. league runs straight through the summer so I’m not really able to do that, but whereas in Sweden, France, England, they have a break where I can go home.”

Since going abroad, the 27-year-old has played professionally for two years in Sweden (AIK and Pitea), then a year in France (ASJ Soyaux) before spending the last two seasons in Germany with Freiburg. Freiburg finished eighth of 12 teams with 7 wins 4 ties and 11 losses in the recently completed 2013-14 Frauen-Bundesliga season. O’Sullivan scored 6 goals with Freiburg, including a hat trick versus BV Cloppenburg in a 7-2 victory. (Also at Freiburg last season were two American defenders: Chioma Igwe, who played collegiately with the University of California and Santa Clara before joining Boston and Chicago in WPS, and Jenista Clark, who played at the University of Minnesota and briefly with Sky Blue FC in WPS before heading to Germany.)

O’Sullivan was happy playing in Germany but will play in her fourth European nation after joining Notts County of the English FAWSL during their summer break.

“It’s been a really great experience, a great city [Freiburg is located in Southwestern Germany, in the legendary Black Forest] and a well-run club,” O’Sullivavn said. “I wish I could have stayed longer but I feel that I got a really good opportunity at Notts County in the English FA.” She signed until the end of the season, “then we’ll discuss after the season is over what I do from there.”

She is joining Notts County this week and will play with Canadian international midfielder Desiree Scott, who last season was such a force with FC Kansas City, and Australian international defender Danielle Brogan, also a mid-season acquisition.

O’Sullivan is involved in the U.S. soccer scene as she returns every summer for her Fiona’s Soccer Camp in Marin County, California, which she started as a 17-year-old, after graduating from high school, and is now in its 11th year. She holds three or four different sessions each summer, with about 60 kids each week.

“I really enjoy spending time with kids, coaching them and sharing what I have learned,” she said. “I feel that I couldn’t have gotten where I am today without my community, who helped coached me, so it’s an element of making sure I continue that teaching environment in the community.”

When asked if she plans on returning to the U.S. to play professionally, O’Sullivan said, “I definitely feel that it could still be an option. It’s a possibility in the future; I’ve stayed in contact with a couple of clubs but we haven’t found a mutually beneficial situation. But I’m not totally ruling it out.”

O’Sullivan is a full international, having joined the Republic of Ireland when former coach Noel King brought the team to Indiana in the summer of 2009 for two months of training ahead of 2011 Women’s World Cup qualifying. She tried out—qualifying through her Irish-born father–and made the team at that time and since then has won over 30 caps with 12 goals.

O’Sullivan has started six of seven 2015 UEFA Women’s World Cup qualifiers to date, with two goals scored. The Irish approach towards their diaspora has been to find a few top quality players rather than to recruit the balance of the team around them (as Greece and Turkey have done in the past): the latter approach would not only break budgets but would take away the focus on developing the youth at home, many of whom play Gaelic football.

Mary Therese McDonald (formerly of the University of Illinois) and Shannon Smyth (formerly of the University of Louisville) are also dual American/Republic of Ireland passport holders who play for Ireland, who sit third in UEFA’s World Cup Qualification Group A with three games left. The Irish are 5 points behind second-place Russia and 13 behind leaders Germany, and have still never qualified for a World Cup. Over the past half-decade, they have been much more competitive than in the past, thanks in part to selective recruitment from their diaspora, such as European league veteran Fiona O’Sullivan.

The Lowdown: Tight races for final playoff spots
Young Sullivan taking on leadership role for U-20 USWNT ahead of World Cup