NWSL officiating: The narrative and the statistics 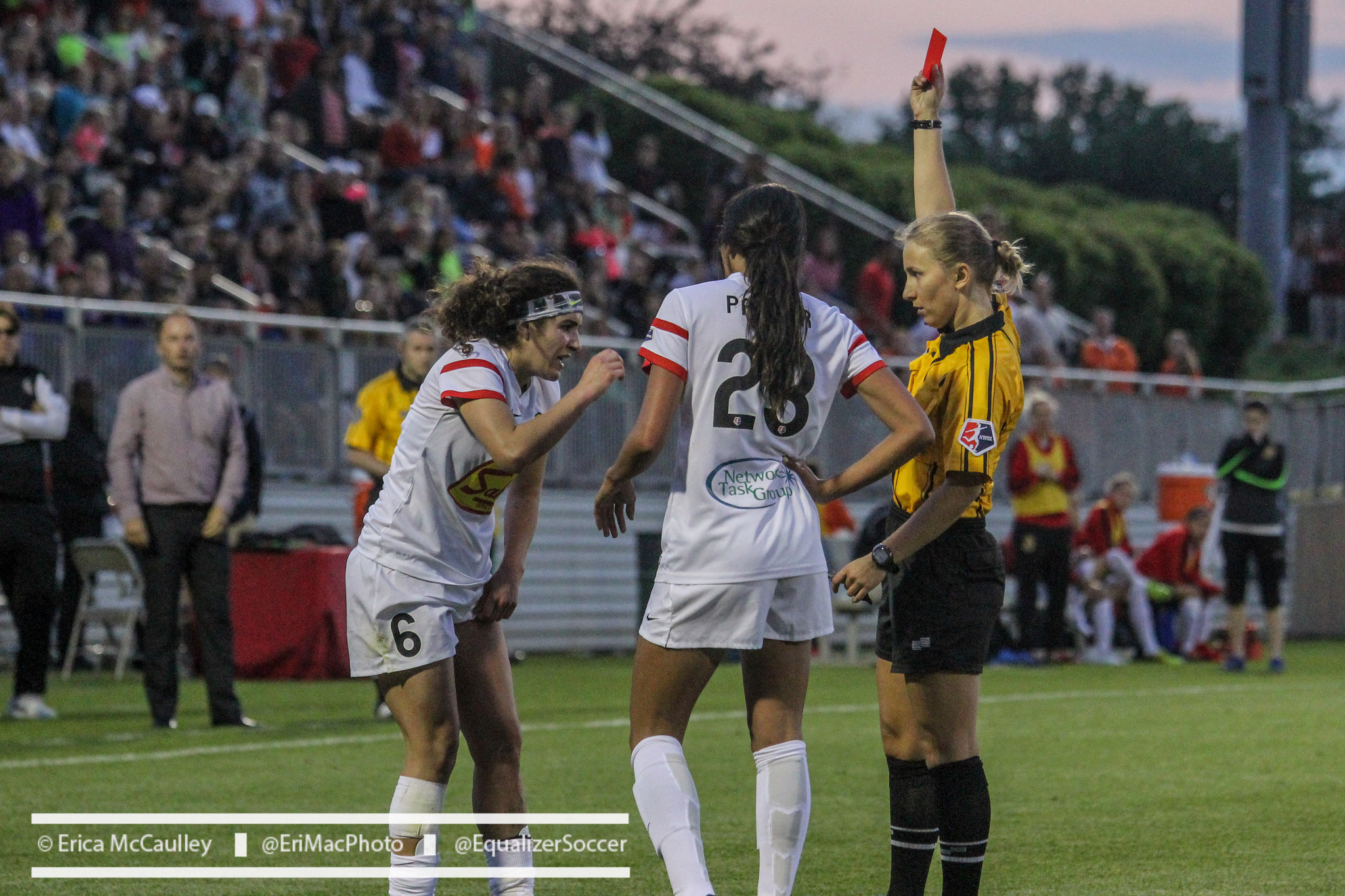 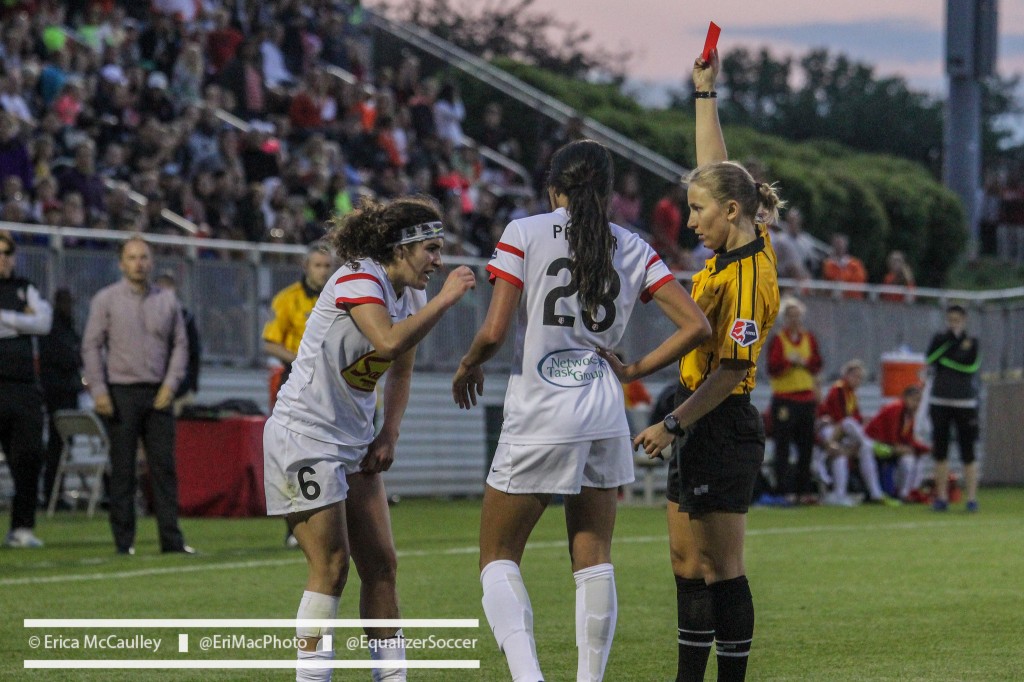 Flash midfielder Angela Salem earns a red card in a May 17 match against the Spirit. (Photo Copyright Erica McCaulley for The Equalizer)

For the second year in a row, refereeing in the National Women’s Soccer League has been a primary topic of discussion. It was a concern in season one, and this year, rightly, wrongly or somewhere in between, it remains at the forefront of conversations amongst those who follow the league.

This should come as no surprise — NWSL executive director Cheryl Bailey was fielding questions about improving referees well before the season kicked off.

“Obviously PRO continuously works to make improvements with the referees,” Bailey said in a season-opening conference call in early April. “Sandra Serafini does a good job when it comes to organizing that group and making sure that they are prepared to enter the NWSL. We have new officials coming in from time-to-time, and we also have some that won’t be returning. So, I guarantee nothing, but I can tell you that coming alongside PRO has been good for the National Women’s Soccer League.”

Bailey was asked the question in light of last year’s inaugural season hiccups. The headlines in year two suggest that there are still improvements to be made. In 77 games to date this season, a total of 35 penalty kicks have been awarded. That equates to one every 198 minutes, or over two full matches. It’s only one statistic, but it’s a sample. There have been 136 yellow cards and eight red cards in those 77 matches, and plenty more that could have been handed out.

But looking beyond the numbers, PKs and cards drastically change matches, and they don’t come without controversy. The Washington Spirit have been involved in several such scenarios, earning a 92nd minute PK on May 21 to tie Sky Blue FC, 3-3, and conceding two penalties in the opening six minutes against Boston on July 2 in the only NWSL match of the season to feature three PKs. In that match, the Spirit earned — you guessed it — another stoppage time penalty kick — this one in the 91st minute — for another 3-3 draw.

“It could very easily be explained that players are fatigued at the end of the game and the challenges become less tidy,” Sandra Serafini, women’s referee coach and NWSL assignor for Professional Referee Organization (PRO), told The Equalizer in an interview in June. Serafini said that a penalty in the 1st minute is also a penalty in the 90th minute.

Six matches thus far this season have seen both teams be called for at least one penalty kick. Three teams have received two PKs in one match. Seattle’s six penalties — all converted by league goal-scoring leader Kim Little — leads the NWSL, while the Western New York Flash have been awarded a single PK this season.

PRO assigns referees to all NWSL and MLS matches. Serafini’s job is to develop the referees and place them at matches each week, something she calls a “big process.” Serafini likens managing referees to coaching a team: There are weekly reviews, film, education, meetings, and, “sometimes, just like players have bad plays, some officials make decisions that are not good.”

Referees work their way up from lower levels of the youth game and the semi-professional ranks of the USL W-League, the WPSL and the NPSL before making it to the center circle of an NWSL match. There is no favoritism toward female officials, Serafini said, but developing top-notch women as refs is part of the goal. (Here is PRO’s full roster of FIFA Women’s Panel referees.)

In NWSL this season and last, the narrative surrounding the refs — from fans, media, and even the few coaches willing to take the fines that they know will follow — has had a decidedly negative tone. Thorns coach Paul Riley was fined for relatively tame comments in mid-June, and Breakers coach Tom Durkin and GM Lee Billiard were fined for more direct criticism of referee Dimitar Chavdarov (who was at the center of the Ashlyn Harris push/no push controversy).

[UPDATE: Washington’s Jordan Angeli received a second yellow card (at the 7:00 mark in these highlights) in a June 15 match for kicking Veronica Boquete, per PRO’s referee report: “Angeli proceeds to kick at the ball after the whistle has stopped play. By coming in to challenge after the whistle is blown, Angeli runs the risk of being sanctioned with a yellow card for Unsporting Behavior, as this action is aggressive.”This article originally classified that as a mistaken identity caution that led to the ejection.]

Adding to the challenges of improving referees is that the NWSL is one of the most physical women’s leagues in the world. A June 7 bloodbath between Chicago and Seattle ended with nine yellow cards and two penalty kicks, but no ejections. Red Stars midfielder Julianne Sitch was retroactively suspended two games for a vicious elbow to Keelin Winters’ face.

So how does the officiating improve? Serafini says the review process is ongoing throughout the season, and the goal is always to minimize errors.

And there are positives: NWSL referee Margaret Domka was selected as one of the 18 referees for next month’s FIFA U-20 Women’s World Cup in Canada, and colleagues Marlene Duffy and Veronica Perez will join her as assistant referees. Christina Unkel has been assigned to the 2014 Summer Youth Olympics.

Improvements will take time to become noticeable, and it can’t go without being said that, given the negative narrative surrounding NWSL officiating, there is a general undertone of disrespect toward officials from some players and coaches, which further leads to issues. That will always be a part of any sport, but the NWSL seems to have reached an impasse as the frustrations of teams have piled up. It will take a collective effort to shift the focus back onto the play, and not the calls.