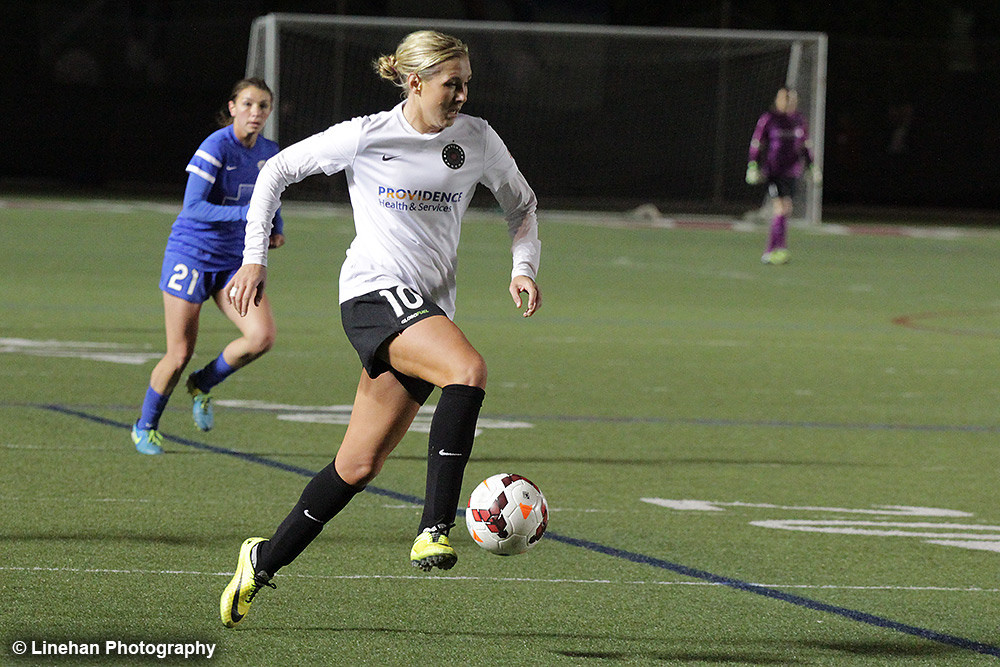 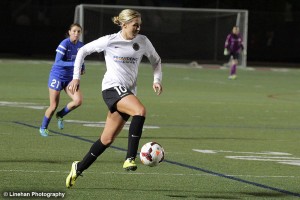 FC Kansas City’s win streak and Nicole Barnhart’s shutout streak both crash landed in spectacular fashion Sunday night at the hands of Portland Thorns FC, who established a league record for goals and winning margin in a 7-1 thrashing of the 2nd-place Blues.

Veronica Boquete’s 3rd minute goal signaled an early end of Barnhart’s six-match shutout streak and snapped her consecutive minute streak at 588.  Before it was over Boquete had added another goal, Allie Long connected twice, and Alex Morgan, Christine Sinclair, and Amber Brooks added goals.  The only cause for concern on the Thorns side was seeing Alex Morgan, stretchered off in the 2nd half with what appeared to be an ankle injury.  Morgan was taken to the locker room where she remained for the balance of the match, but was seen walking on the pitch after the match.

“It was the other ankle,” Thorns coach Paul Riley said. “I think she was just more frightened. She’d been out a long time, so I think anytime a tackle comes in like that, it just leaves a little question mark in the back of her mind. We were getting her out but she had a terrific game today.”

The big talking point ahead of the match was the absence of Kansas City’s Lauren Holiday, who came down ill after last weekend’s win over Sky Blue FC.  In her place the Blues gave Katrina Gorry just her second NWSL start.  Gorry responded with the only goal for Kansas City, an off-angle shot that made it 2-1 and briefly turned the match competitive.  But in the end it was all Thorns, who topped the league record of six goals they netted June 21 in Washington in what had been their most recent victory.

The opening goal came after Long won possession on the left flank, dribbled into space, and laid off a pass to Morgan inside the penalty area.  With defenders closing in, Morgan dropped it back to Boquete who took a touch around Jenna Richmond and then laced a shot through traffic that crashed Barnhart’s streak and made it 1-0.  By the quarter-hour mark Morgan was on the finishing end of the goal that made it 2-0.  The goal was the conclusion of a rare bit of methodical buildup by the Thorns.  In the end Morgan played to Stephanie Catley on the left flank and the Australian left back’s first touch was a return pass to Morgan.  It took one bounce and Morgan greeted it with a one-time smash that beat Barnhart near post.

Following Gorry’s goal, FC Kansas City had numerous clear chances to equalize but could never muster the precision to get it done.  The Thorns made them pay in the 43rd minute after a rare mistake in back by FC Kansas City led to a turnover to Long.  She played give-and-go with Christine Sinclair and beat Barnhart off the return feed to make it 3-1 going into halftime.  But the rout had just begun.

Hopes for a second-half comeback were all but dashed when Long converted her second of the night in the 62nd minute.  The Thorns won the ball in midfield when a Kansas City pass deflected off referee Christina Unkel.  Boquete, allowed far too much space, found Long in the box and she turned on multiple defenders and curled a shot into the far post.  Boquete then converted from the spot in the 74th minute after Amy LePeilbet took down Tobin Heath in the penalty box.

Morgan came out in the 78th minute after an injury at midfield.  In the last two Thorns’ matches, both against the Red Stars, late trouble set in when Morgan was subbed out late.  No such trouble found the Thorns this time.  Sinclair made a fantastic header near-post off an 80th-minute cross by Boquete to make it 6-1.  And Brooks made it 7-1 in the 87th when she beat Barnhart to Mana Shim’s far-post cross near the top of the six.  It was Brooks’s first NWSL goal.

The lopsided win means the Thorns (7-6-4, 25 pts.) move to 4th-place on goal difference over the Red Stars, who they visit Thursday night.  They entered the week trailing the Red Stars, who beat the Reign 1-0 on Saturday night, but the 7-1 win landed the Thorns at +6 to the Red Stars’ +4.  (The Thorns are +11 in their last two wins, -5 in their other 15 games.)  FC Kansas City (10-5-3, 33 pts.) failed to capitalize on the Reign’s first loss and remain 9 pts. out of 1st while conceding a match in hand to the league leaders.  The Blues are at Western New York on Friday night.

“It’s a final,” Boquete said of Thursday’s match vs. Chicago. “For us, it’s a final. For Chicago, it’s a final. We know that not all the games will be like a final, but this is a real one. It’s two teams that are fighting to be in the playoffs. It will be hard. We know that the last two games were a surprise. We know them. They know us.”