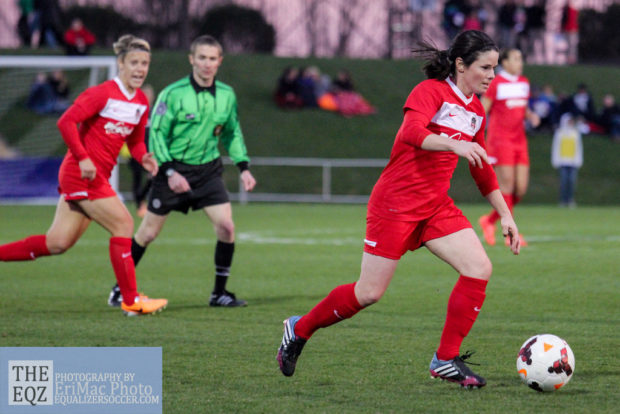 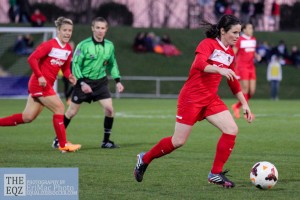 Diana Matheson (right) scored the game-winning PK for the Spirit vs. WNY. (Copyright EriMac Photo for The Equalizer)

ROCHESTER, N.Y. — With a 1-0 win Saturday against the WNY Flash, the Washington Spirit move into the third place in the NWSL standings, leap-frogging the Flash.

Diana Matheson netted the only goal of the match off of a penalty kicked earned in the 54th minute. Flash defender Katherine Reynolds tackled Kerstin Garefrekes in the box, which earned Reynolds a red card and gave the Spirit a PK.

The Flash’s starting goalkeeper, Lydia Williams, left the field in the 13th minute and rookie Kelsey Wys subbed in to replace her. The Flash PR staff is reporting a left knee injury to Williams. This marks Wys’s 5th appearance for the Flash; she played four matches in goal when Williams was fulfilling Australian national team duties.

Wys made several huge saves in the second half to keep the Flash in the game, but ultimately the PK was the game-winning goal for the Spirit. Garefrekes and Taylor were on the forefront of many of those dangerous shots saved by Wys.

“She has played in games like this before throughout her collegiate career. She’s a big time player,” said Flash defender Brittany Taylor when asked about Wys stepping up in goal. “To be able to come into a game like this with the pressure on speaks volumes.”

[MORE: Wambach back with team, could return to playing in next two weeks]

The Spirit had a slow first half, but picked up the offensive momentum in the second half as the Flash played with 10 players.

Western New York started off looking solid and created two strong opportunities early on, but ultimately fell flat the rest of the match unable to generate any strong offensive sequences. Carli Lloyd hit the post in the 4th minute on a free kick and Jasmyne Spencer hit the other post later in the half for the Flash.

Also with Saturday’s win, the Spirit topped the season series against the Flash with a 2-1 record.

“I’m happy with the fight. Kelsey Wys came in there and made some huge saves,” said Flash head coach Aaron Lines. “The group stuck together and tried to get something out of the game.”