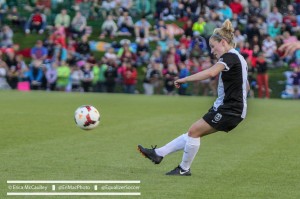 Seattle Reign FC’s unbeaten run to start the season is over at 16 games after a 1-0 loss to the Chicago Red Stars on Saturday at Benedictine University in Lisle, Ill. Red Stars forward Melissa Tancredi scored the only goal of the match.

Seattle started the season 13-0-3 before Saturday’s loss. Eight times during that stretch, Seattle came back from a deficit to earn a total of 20 points, but the Reign’s comeback magic ran dry on Saturday.

Tancredi opened the scoring in the 8th minute, beating Reign goalkeeper Hope Solo in what will likely be a candidate for goal of the year. Julie Johnston sent a ball over the top for Tancredi, who let it bounce once before half-volleying the ball with her right foot, sending it into the far upper corner and freezing Solo.

Red Stars defender Abby Erceg nearly put the home side ahead in the fourth minute, but her header following a corner kick was cleared off the line.

Reign coach Laura Harvey pushed league-leading goal scorer Kim Little from midfield to forward late in the match, a tactical move that has become common for the league-leaders as they have pushed for goals late in matches. But it didn’t result in any clear-cut chances for the visitors, who next play against Chicago again on Sunday, July 20, in Seattle.