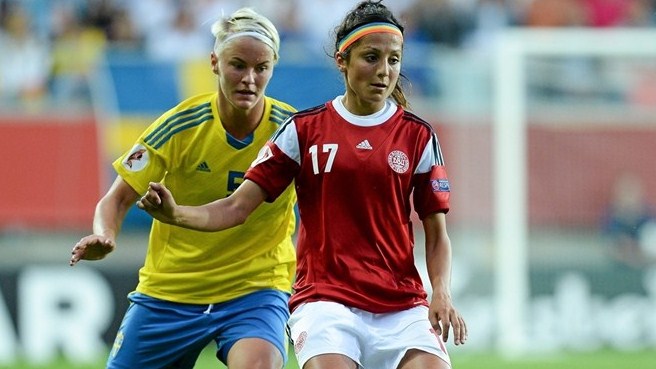 Nadia Nadim (right) is adjusting to life in the U.S. with Sky Blue FC. (Photo: UEFA)

Nadia Nadim stepped onto the pitch and made her Sky Blue FC and NWSL debut on Sunday against FC Kansas City (a 5-0 loss) just before the second half kicked off. The 26-year-old striker has always wanted to play in the United States, but until now the timing just wasn’t right.

Nadim is on loan from Danish club, Fortuna Hjørring, for the remainder of the 2014 NWSL season. She has been playing in the Elitedivisionen with Fortuna Hjørring since 2012. American Fortuna assistant coach Carrie Kveton played an important role in helping to set up Nadia’s loan deal with Sky Blue FC.

Nadim has represented Denmark on the international stage and she was a key contributor for Denmark during Euro 2013 in Sweden last summer. Nadim would love to see Denmark qualify for the upcoming 2015 FIFA Women’s World Cup in Canada, but she admits that Denmark has a huge hill to climb if they want to qualify.

When Nadim decides to hangup her football boots she would like to enter the medical field and help make a difference in people’s lives. For now she is focused on playing football and she couldn’t be more excited to be a part of Sky Blue FC and the NWSL.

What are your thoughts on your first match with Sky Blue FC?

Nadia Nadim: I was really glad that I was able to play my first game. The doctor and the physical check-ups went right, but obviously (that) was a really hard game to come into because we were behind 4-0. (I’m) sad that we didn’t win, but happy I could play in the second half.

What helped you decide to join Sky Blue FC on loan for the rest of this season?

NN: The decision (on) why I wanted to play with Sky Blue FC was made because right now we have a break in our own season and my school starts the 1st of September. Everything seemed right for me to do such a thing, and I wanted to experience something new, I wanted to see how the league is in the U.S.

I’ve heard a lot about it, I know there are a lot of great players playing here (NWSL). It’s one of the best leagues in the world, if not the best. I wanted to measure myself and my skills with the best players so it was an obvious choice.

How was your club Fortuna Hjørring able to help you with your loan to Sky Blue FC?

NN: My coach, Carrie Kveton, she helped me a lot with getting contacts with the right people, so thanks to her.

Before joining Sky Blue FC, what type of knowledge did you have on the NWSL?

NN: The NWSL is counted as one of the best leagues and all the good players play here. Especially because all the U.S. national team players are here. It will be a great experience for me to be here and play against that kind of player.

I’m sure that will help my skills and me as a player. Especially because these players are really physical and the type of players are a bit different from the European type. It’s more individual instead of tactical and I like that.
I’m looking forward to an awesome time.

How do you think you can help Sky Blue FC?

NN: I hope that I can help Sky Blue FC with getting some points. I’ve been told they’ve been playing really good lately, but haven’t had the luck to score goals. I hope I can do something there, that would be fantastic if I could.

What type of Striker are you?

Would you be interested in playing a full-season in the NWSL in 2015?

NN: I would love to play in the league for a whole season. I have had the opportunity years ago and still have it, but right now my studies in medicine really make it hard for me to be away for such a long time. I have two years left of my studies so maybe afterwards or maybe I’m going to have a break depending on how this experience is going to impact me.

Right now I’m really happy with Fortuna Hjørring and I want to get back and do good in the European Champions League, so that’s the goal right now.

What are your thoughts on Denmark’s 2015 World Cup qualifying campaign (currently in third place in Group 3)?

NN: Our World Cup campaign isn’t going that good. We have to almost have a miracle to get through and qualify for the World Cup. We have had some weird games, and lost points to some opponents that we should have won, but yeah that’s part of the game.

NM: Obviously the three games left we have to win to have the minimal chance of a miracle to happen. They are really important. I really really hope that somehow we make the playoff games and qualify for the World Cup because that will be the best thing ever, but right now things are not looking that good.

What kind of career would you like to have after you finish medical school?

Why did you decided to go to medical school?

NN: The reason why I decided to go to medical school was that I want to help people because I’ve been helped a lot in my life. I want to give something back. I play football because I love it and that’s my hobby, but I want to do a more important change in the world and I think being a doctor is the best way.

What do you like to do when you aren’t playing football?

NN: When I’m not playing football I usually try to relax with my friends, go to the cinema, and go to the beach. I like regular stuff as people do. To be honest, I haven’t had a lot of time to do other stuff because school has been really hard lately, but right now I’m enjoying life. Training, and we have a lot of time to just relax which is awesome. I just do stuff like everyone else and I love watching films.