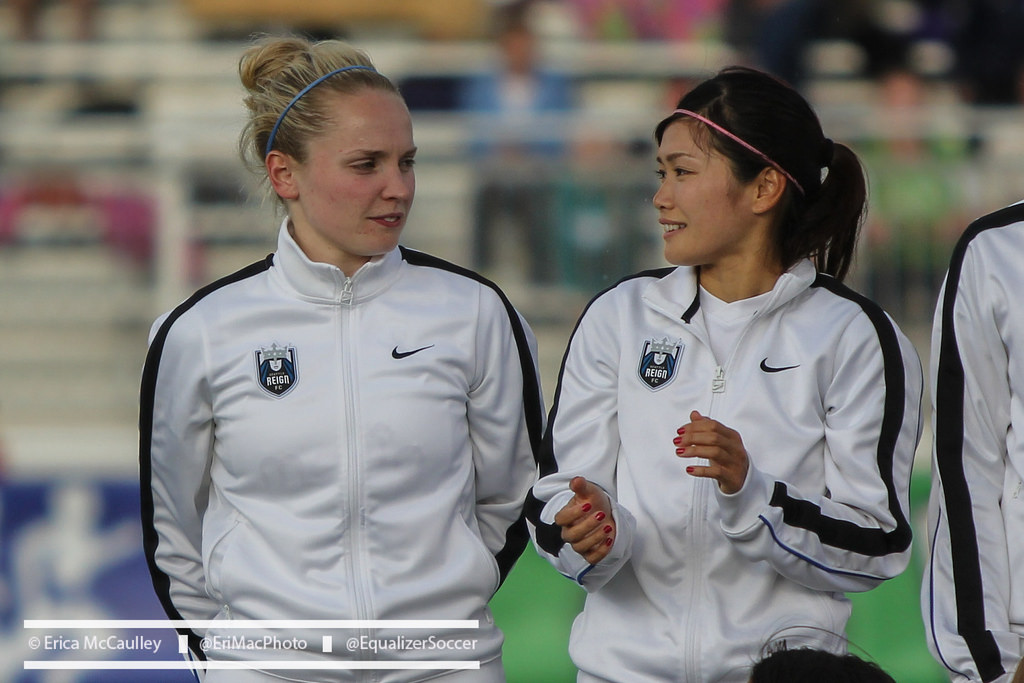 They did it the hard way again, but Seattle Reign FC stayed unbeaten on Sunday, defeating the last-place Boston Breakers 3-2 at home at Memorial Stadium. Seattle (13-0-3, 42 pts.) hasn’t lost through the first 16 matches of the National Women’s Soccer League season.

Nahomi Kawasumi scored twice for the Reign, who had to come back from conceding an early goal and from blowing a lead within a minute of obtaining it late in the match. The victory marked the eighth time this season that the Reign have come back from a losing position, earning 20 pts. from such scenarios.

The victory sends Seattle 9 pts. clear of second-place FC Kansas City — who embarrassed Sky Blue FC, 5-0, on Sunday — with a game in hand on the Blues.

Kawasumi’s game-winner came in the 83rd minute, when Jess Fishlock nutmegged Boston defender Cat Whitehill to find an open Kawasumi for the tap-in past Breakers goalkeeper Alyssa Naeher, whose heroics kept the Breakers in front until after halftime.

The Japanese international opened the scoring in the 56th minute when she was left unmarked at the back post and she half-volleyed Stephanie Cox’s cross past Naeher from a tight angle.

Seattle briefly took the lead in the 76th minute when a skillful build-up led to a a Bianca Sierra own goal. Kawasumi back-heeled the ball to an open Sydney Leroux at the top of the 18-yard box, and Leroux’s low through ball to the back post toward Kim Little, but Sierra put the ball in her own net as she tried to clear it away.

The lead lasted less than two minutes, however, as Katie Schoepfer settled the ball after it pin-balled around, beat a pair of Seattle defenders and slotted her shot past Hope Solo at the far post to level the score at 2-2. Kawasumi, however, had the last say with a late winner.

Courtney Jones opened the scoring for Boston in the 19th minute when she beat Solo from 25 yards. The ball looked to take a slight deflection off a Seattle defender before beating Solo.

Naeher looked unbeatable most of the first 60 minutes, making several clutch saves to keep the Breakers ahead following their early go-ahead goal. Naeher denied Beverly Goebel just before halftime after Goebel played a give-and-go with Kawasumi. Naeher would again come up big just after halftime when she denied Little in a 1-v-1 situation, but Kawasumi opened the scoring minutes later.

Breakers midfielder Lianne Sanderson was sent off in second-half stoppage time, picking up a second yellow card for a challenge on Fishlock. Sanderson hit the crossbar seconds before the halftime whistle, nearly sending Boston into the break up two goals.

Next up for the Reign in their quest for an unbeaten regular season — which has eight games remaining — is a trip to Chicago on Saturday.

Among the 3,705 people in attendance on Sunday in Seattle was U.S. national team coach Jill Ellis.