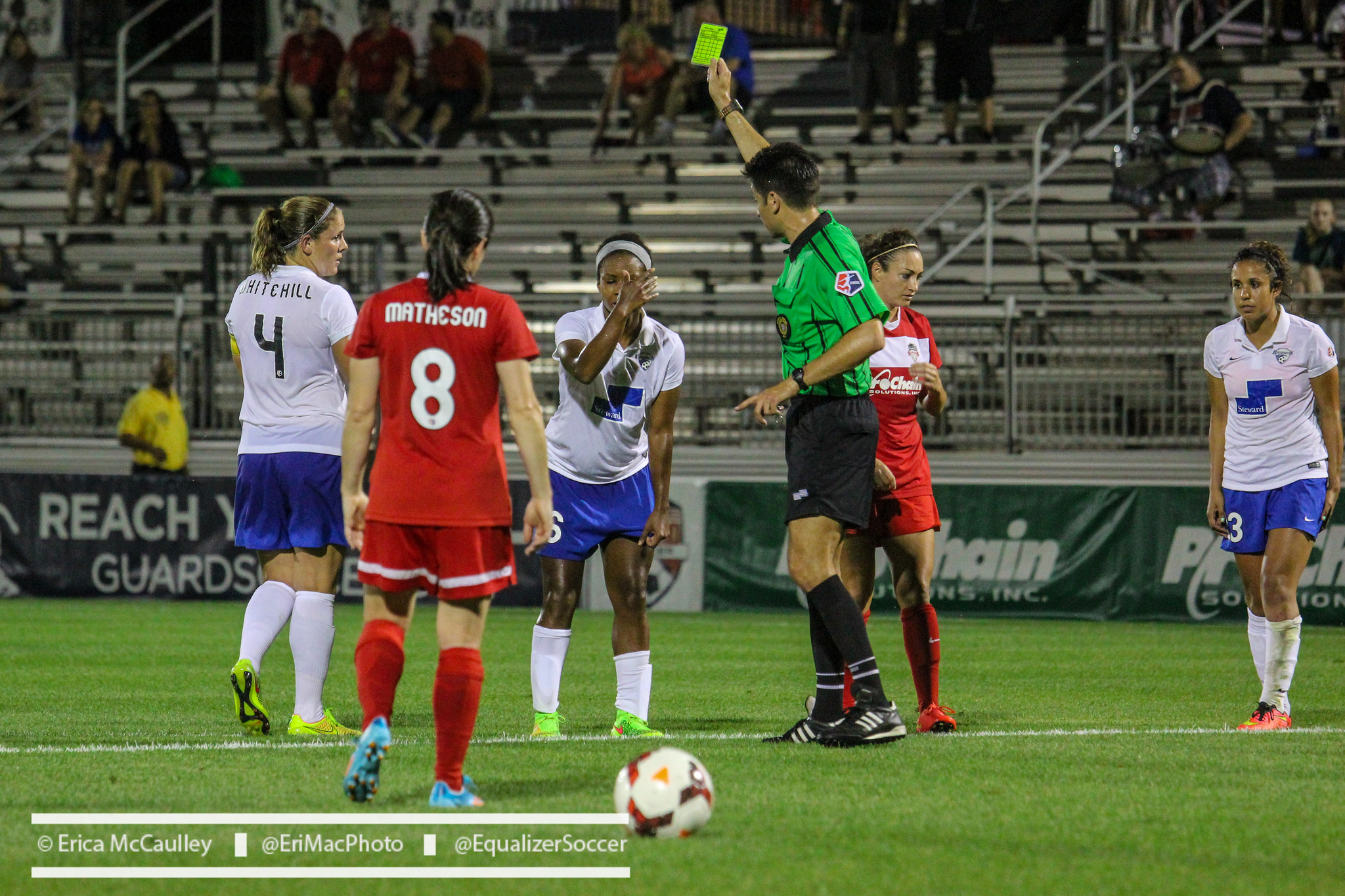 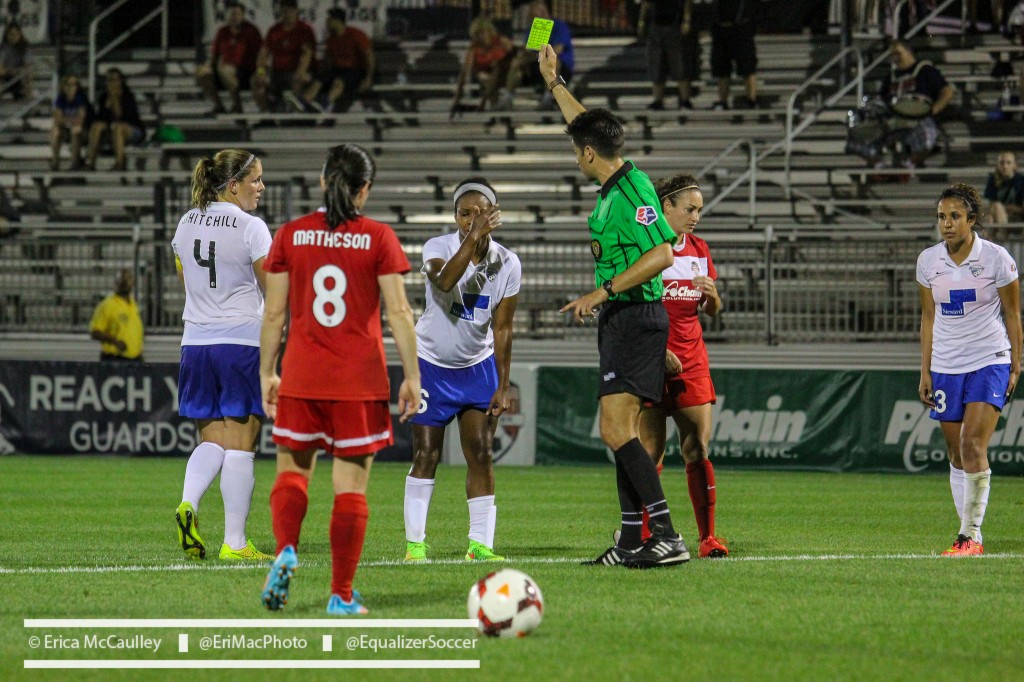 Three penalty kicks were issued in Wednesday's match between the Spirit and Breakers. (Photo Copyright Erica McCaulley for The Equalizer)

BOYDS, Md. — The Washington Spirit and Boston Breakers battled to a 3-3 tie at the Maryland SoccerPlex on Wednesday. Boston took an early two-goal Wednesday after the Spirit made back-to-back horrendous errors in the box leading to penalty kicks for the visitors.

In the third minute, Jazmine Reeves penetrated the Spirit box and Niki Cross ran into the back of Reeves, pushing her to the ground. Four minutes later, Ali Krieger brought Nkem Ezurike down in the box.

Heather O’Reilly took and converted both penalties for Boston. On the first, O’Reilly went to the left and Spirit goalkeeper Ashlyn Harris guessed right. O’Reilly went straight down the middle on the second attempt.

[MORE: Photos of the match, including some of the PK controversies]

Controversy continued throughout the match, and emotions boiled over in the 88th minute, when Krieger was issued a yellow card and Harris appeared to push the referee.

“I think it was just one of those games where everyone was just kind of losing control,” Harris said. “I think the ref kind of let things get out of hand and every player was boiling at that point. I think players were put in situations where they could have been injured bad. There were tackles out there that shouldn’t have been. My hope is if this happens again, the referee can take a little bit more control of the game…It was just really unfortunate probably one of the worst games I’ve ever been a part of. “

“It was the plan the girls actually came up with to go for it early and we came out with a two-goal lead. We gave away a soft goal I thought it was a soft goal and a string of errors and then we went up 3-1 and then the rest is all up to the ref as far as I concerned. I don’t care. They can fine me. They can fine our club, but that was the most suspect officiating.”

Durkin continued: “By the scheduling and everything else that goes on in this league. I wonder how the Boston Breakers can get a fair chance.” 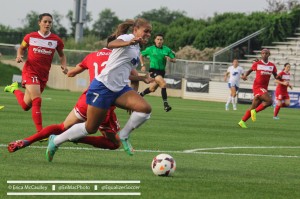 Jazmine Reeves is brought down by Niki Cross for a penalty kick. (Photo Copyright Erica McCaulley for The Equalizer)

Spirit coach Mark Parsons focused on what his team could do to ensure that the 1-v-1 situations that led to the early penalty kicks don’t happen again. He did describe the game as “(b)oth teams, both coaches staring at each other wondering what the heck is going on.”

After the early miscues by the backline, the Spirit settled in and dominated for stretches. Breakers goalkeeper Alyssa Naeher and the Breakers defense made important to keep the scoreline in Boston’s favor. In the 16th minute, Naeher made an emphatic punch to push a Spirit corner kick away from Boston’s goal. Several of Washington’s first half shots were blocked by Boston defenders.

The Spirit cut the deficit in half in the 28th minute. Christine Nairn settled a ball at midfield and found Lisa De Vanna on the left flank. De Vanna crossed the ball into the box. De Vanna’s cross found Taylor who headed the ball past Naeher.

In the 45th minute, Reeves scored to once again give Boston a two-goal lead. A ball was played forward to Reeves and Crystal Dunn ran down Reeves, but slipped. The ball got caught by Dunn’s feet and fell perfectly to Reeves for the finish.

Washington got one back 10 minutes into the second half. De Vanna was fouled near the edge of the box by Avant. Onlookers called for a penalty kick but the referee awarded only a free kick. In the end, it didn’t matter as Nairn’s free kick found Taylor’s head, and Taylor scored off her own rebound to cut the deficit.

Taylor nearly earned a hat trick four minutes later when De Vanna’s header into the box just missed Taylor. In the 65th minute, the game had to be delayed after the Maryland SoccerPlex weather system detected lightning in the area. After an approximately 40-minute delay, play resumed. Five minutes later, Maddy Evans received a straight red card after going in on a tackle on Lori Lindsey but appearing to not not make contact.

Down to 10 players, Boston had the lead but Washington had the momentum. The Spirit had a couple of near misses before Bianca Sierra was called for a foul in the box on Taylor. The Spirit were awarded a penalty kick of their own, and Matheson coolly put it away for the 3-3 tie.